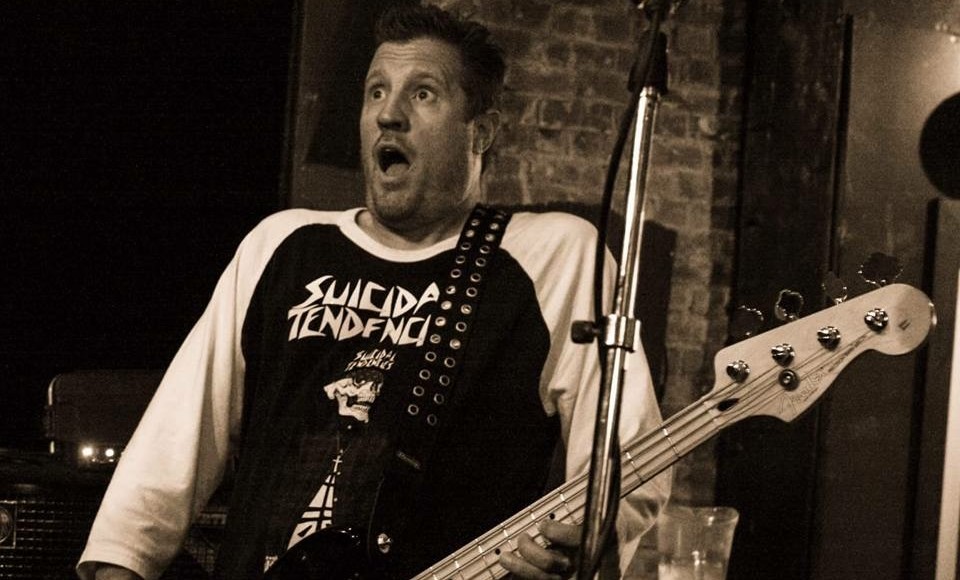 Feb. 9, 2016 was the day that the one and only Jason Lamb was gone. He was my dear friend and a dedicated musician. He never slowed down until his death at age 47. He punched his time card and checked out. Gone overnight like a whirlwind out of my life as fast as he came into it around nearly two decades ago. I first met him at Burt’s Tiki Lounge when he played with the Swamp Donkeys in 1997. I was choking on thick cigarette smoke watching them wail at full volume. Back then, I was just a kid who knew nothing about raw-live-music shows. This guy was bringing it hard. He had his shirt off, whirling his long hair around like a maniac. I was standing close to the stage, and I think that my ears are still ringing because of it. With his guitar at full volume, he looked right at me, flipped me off and yelled out, “Fuck you!” That’s how he first said “Hi” to me.

It wasn’t until later in ’97 when I started playing at Burt’s. It was then that I got to hang out with the guy who randomly flipped me off. It didn’t take long for us to become friends. We hung out at each other’s shows—mostly at Burt’s. We’d get hammered drunk and play our hearts out onstage and quite possibly ended up in the gutter afterwards. It was almost a rite of passage, in a way, for many players, and Burt’s is where it all happened. Out of everyone, though, Jason definitely was the wild one. He had his pedal to the metal and never once thought to put on the brakes. He always blasted it loud and didn’t give a fuck what anyone thought. If you’ve ever seen that “crazy eye” of Jason Lamb, you could see, deep down, how wild his soul really was. He joined Thunderfist for a couple of years. We toured to Canada and down the West Coast—long hours in the van. No matter where we were, Jason always had a way of meeting new people. His friendly demeanor just made people gravitate toward him. One night, after our show in Portland, he drunkenly decided to go for a walk. He popped his daily medicine, pulled out his handgun and disappeared out into the fog. I thought I’d never see him again. He really didn’t like touring, as he was married back then. Shortly after that, he departed from the band.

“Come have a beer.” That’s what he always said when he wanted to recruit me for a project. “Just come have a beer and play a few songs.” Somehow, it always worked. He recruited Jeremy Cardenas and me to form Pimp Grenade, a Mafioso suit–wearing surf/punk band. Those were good times. He would always ask the crowd, “Surf or punk?” Some drunk would yell out, “surf!” only for him to respond with, “Fuck you!” then bust into a fast punk number. It was close to four years ago when I got another call. “Just come have a beer and play a few songs.” Oh, shit: here we go again. This time, it was for a ska band. This time, I was certain that his wizardry wasn’t going to work. I didn’t know much about ska. “Ever hear of Sturgeon General?” Is he fucking serious? I grew up in the ’90s—they were kind of a big deal then. As intimidated as I was, I went and had a beer and played a few songs. Sure as shit, it happened again. Lamb’s magical recruiting abilities got me into yet another project.

On Jan. 30, we played our last show together. I’ll never forget that night. We were playing at the Ritz Theatre in San Jose, California. I had a wicked hangover from the night before in Santa Cruz. I wound up puking backstage about 20 minutes before the show. I made it to the couch where I curled up into a ball. In comes Jason Lamb. He looks at me with wide eyes and says, “I know what to do!” He disappears and returns with a full pint. “Drink this beer!” he says. “I know you—you’ll bounce right back.” I slam it, only for him to return with a second glass. “Now drink this beer. We have 10 minutes!” I told him the foam from two beers was just too much. He vanishes again and returns with a cocktail. “Drink this gin and tonic!” I about pissed myself from laughing so hard. I slammed the cocktail and we got to work, and it was one of the best shows that we’ve ever played. Jason, you’ve meant the world to everyone. Your style, energy and craziness is something that I’ll never forget. Nobody will. Everyone will miss you unconditionally. Until we meet again, my friend. Keep it loud on the other side. Just don’t tell God that “They’re all whores but Mom.”