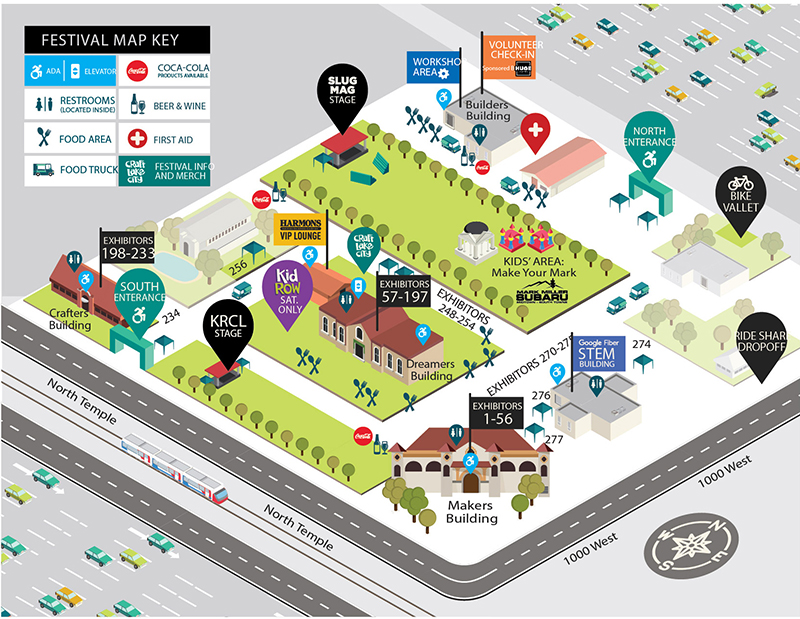 The vibrant colors, smells and sounds of the 11th Annual Craft Lake City DIY Festival Presented By Harmons have always been synonymous with the Gallivan Center in downtown Salt Lake City. Since the DIY Festival’s inception in 2009, the Gallivan Center has been a home for Utah’s best artisans, performers and exhibitors. But for the 11th Annual Festival, Craft Lake City Executive Director Angela Brown recently announced a venue change from the Gallivan Center to the Utah State Fairpark. “Gallivan has been a great home for us—it has been a great place for us to conceptualize the Festival and grow it into what it is today,” says Brown. “We have just programmed every single inch of that space, and it was time for us [to] look at moving the event.”

For Brown, the Utah State Fairpark presented itself as an option early on. Only seven blocks west of Downtown, the Fairpark is a larger space that has allowed Craft Lake City to add on 30 more artisans for this year’s Festival, with room to grow into in the future. “The Fairpark is [a venue] I have been considering on and off the past couple of years because I am actually a resident of that neighborhood,” says Brown. “I live by the fairgrounds and drive by them every day. I’m passionate about that neighborhood.” For Brown, the Fairpark and surrounding neighborhood offer a new opportunity for growth for Craft Lake City.

What’s Cooler than Being Cool?

Another factor for the move was the 2018 DIY Festival, which was marked by three days of sweltering, triple-digit heat. At the Fairpark, the majority of artisans will be able to set up shop indoors with air conditioning. However, there will still be activities outside, including the Kids’ Area: Make Your Mark Park Sponsored By Mark Miller Subaru, food trucks and performances. “We heard from not only our vendors but attendees that it was just too hot [last year],” says Brown. “We really feel like this is going to make [the Festival] a much more pleasant experience.” The VIP Lounge Presented By Harmons will also be an indoor/outdoor event, which Brown hopes will enhance the experience while also giving attendees an incentive to hang out longer at the festival.

One important feature that Craft Lake City wanted to highlight was the Google Fiber STEM Building, which features interactive technological exhibits, a program Brown says many attendees of past DIY Festivals didn’t know was available. “In our exit surveys, we identified that there were about 25 percent of attendees that had no idea that was even happening,” Brown says. “There is so much happening in the Festival environment that it was hard to look up.” At the Fairpark, the Google Fiber STEM Building will be in a much more centralized location, which will foster for more interaction and exposure to the rest of the Festival. “With the STEM Building now being on ground level, we anticipate that nearly all festival attendees will know about the festival programming that we provide there,” she says.

While there has been some hesitation from artisans and attendees about moving away from Downtown, Brown hopes that ultimately the move will be a more comfortable fit for everyone who participates in the DIY Festival every summer. “It’s important for us to be open to change, and we needed to change,” she says. “I think that whenever there’s change, there’s anxiety. But sometimes we don’t even realize how much better it can be.”

For Brown, the change of venue is the end of one era for the DIY Festival, but the heart of the event, which is highlighting the artistic community of Utah, will never change. One such artist, Peach Treats owner Tiffany Blue—who specializes in “bold, wearable art for the not so faint of heart”—is returning as a DIY Festival artisan for 2019. For Blue, the DIY Festival has been invaluable to reaching a new audience with her business. “When I was smaller and new to the SLC art scene, I was able to meet a lot of people who helped my business grow,” she says. “The workshops, and the mentor programs have enriched my life and my business more than I could possibly express,” she says. For Blue, her advice to any artisans or performers considering the DIY Festival in the future is to get inspired and to go for it. “Get excited!” she says. “It is a wonderful show that brings people of all types together. Get ready to work the hardest you have in your life, but also know that you will never love something more than doing what you were meant to do.”

A Bright Future of the DIY Festival

Ultimately, the goal of moving to the Utah State Fairpark is to keep the celebration of local artists while also opening up more space for new artists in the future. “Wherever the artists go, the people will follow,” says Brown. “Honestly, we have no idea [what the impact of the move will be]. The exciting thing is that this will be a new change for all of us.”

The 11th Annual Craft Lake City DIY Festival will take place Aug. 9–11 at the Utah State Fairpark. Tickets are $5 if purchased online, and $7 the day of the event, with an option to buy a three-day pass for $10. Tickets for the VIP Lounge Presented By Harmons are $35. For more information about the upcoming festival, including sign-ups for volunteering, visit craftlakecity.com/diy-festival.