Lord of the Rings is easily the most recognizable fantasy franchise. Most of us have read one or two of the books and we all saw the movies—even if it was just that one time on cable when they were running a marathon and you had nothing better to do. The world that we were shown in the movies was massive and full of some great characters. FantasyCon has managed to round up quite a few of those beloved characters. Samwise Gamgee and Pippin: Sean Astin and Billy Boyd.

FantastyCon 2014: A Tale of Two Hobbits 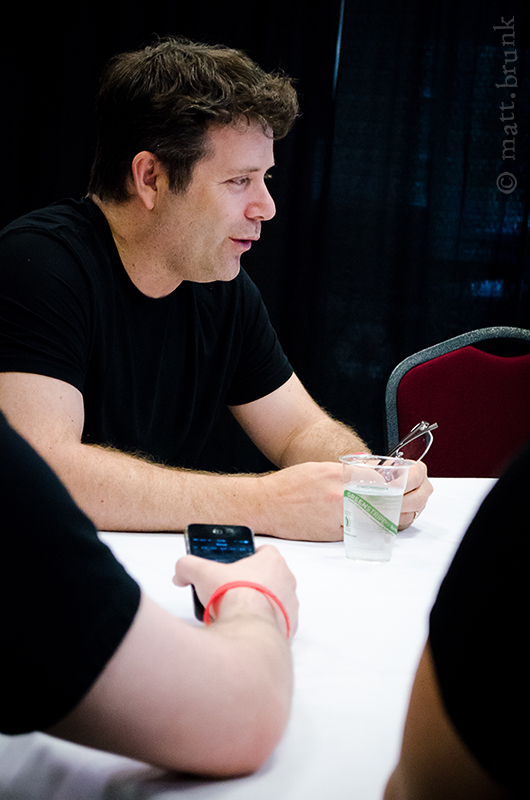 Sean Astin, the actor who played the loveable Samwise Gamgee in the Lord of the Rings Trilogy, at Utah’s FantasyCon. Photo: Matt Brunk

Lord of the Rings is easily the most recognizable fantasy franchise. Most of us have read one or two of the books and we all saw the movies—even if it was just that one time on cable when they were running a marathon and you had nothing better to do. The world that we were shown in the movies was massive and full of some great characters. FantasyCon has managed to round up quite a few of those beloved characters. Samwise Gamgee and Pippin: Sean Astin and Billy Boyd, respectively, were two of my favorite Hobbits from the films, and I loved Astin in Goonies.

Return of the King debuted in theaters over 10 years ago—and we all still know these two best by their hobbit names. For some actors, that could get old fast—especially after ten years of it. Astin and Boyd seem pretty happy with the situation though. “I’m still part of it. I do other things, and I love doing other things, but we will always be the guys who made Lord of the Rings,” Boyd commented. “I’m good with that and I don’t mean that as a negative thing. It’s a wonderful thing that we did and I’ll make other stuff that I may love as much. But that was a wonderful time and I’m very proud to be part of it.”

Astin also has Goonies, and that was in 1985. He was known as Mikey long before he was Sam in his Lord of the Rings gig. He’s had to deal with it longer than most and he still loves it when people want to talk about their Goonies childhood. “I suppose I oscillate between shock and sincere gratification that this is the case,” Astin said. “The thing that blows my mind about Goonies is, if you watch it, it’s very much of its time. It’s Spielberg’s sense of majesty and poetry and Richard Donner’s sense of adventure and there’s something about that kind of thing—Goonies represents a very specific time in people’s lives. I’m always warmed by it and it never gets old. Each person who says it is an individual.”

When Astin mentioned Goonies, the next question from the roundtable was about the sequel that is “in development” on IMDb. Astin hasn’t been approached for any roles, and he does think that he will be. He was certain all along about the Hobbit coming to life and Peter Jackson directing it. He feels like it’s the same thing with Goonies. “It will happen, whether it’s in my lifetime or not, I don’t know,” he said. “When the audience screams and yells as loud as they do for that movie and every city I go to people come by the thousands to talk about that movie, the studio is leaving a lot of money on the table if they don’t get it done. I know Steven wants to do it and everyone knows Richard wants to do it—it’s just a question of getting a script they want and moving forward. There’s no official news that I know of.”

While we were on the topic, another reporter chimed in wondering about what Astin would do with the sequels. It could either be a passing of the torch to a new set of kids, or the adults could have another adventure. Astin has had a long time to think about this and has his answer at the ready. “I’ve always advocated the passing of the torch,” Astin said. “I think everyone wants to see the grownups on the adventure. I think they’re working on the balance between those two things right now. For my money, towards the end of the movie, the torch is passed to the kids and then they could do a million of ‘em. If you just do a scene where you just say, “Hi,” to the grownups at the beginning and then you move onto the adventure with the kids, I think it’s going to leave everyone unsatisfied.”

Once we got the obligatory Goonies and Lord of the Rings questions out of the way, I was curious what the two actors had been up to since. Boyd has been here and there in smaller roles in television and in movies—most recently in the movie, AmStarDam. He just finished filming and it sounds like a hilarious concept. It took some inspiration from the Jack and the Beanstalk stories, except this magic bean grows the world’s biggest marijuana plant. It’s not what you’d expect from a former hobbit, but it does sound interesting. He’s also excited about a new single he’s just recorded with his band, Beecake. Boyd was the one who wrote the melody for the haunting song in Lord of the Rings, so we all know he can sing.

Astin has jumped around a bit since his Hobbit days as well. He’s done comedies with Adam Sandler, made few TV appearances and he did another fantasy role that Terry Pratchett really enjoyed. Pratchett is the author of the expansive Disc World books—Astin had a role in one of the movies. His character, Twoflower, was a bit of a goofy one. I thought the comedic jump was interesting, so I asked Astin how he felt. “Well, one thing was I was fat as Samwise—he’s a fat, stupid Hobbit, if you read the books. As Twoflower, I could be skinny—you guess which one I had more fun doing. I also really admire Pratchett and love the story, fantasy and satirical, tongue-in-cheek elements of it and the buffoonery we got to do. Getting to work with Sir David Jason was fantastic. It was great to migrate, sort of franchise hop.”

I asked him if there was one he preferred, “I think Samwise is a literary character for the ages and he’s arguable on of the most important literary figures in the top 100 out of a billion. What Terry created with Twoflower was really sweet, fun and really silly—but if you had to out the two up against each other, I’d have to go with Sam. My whole life has been about trying to achieve and, no matter what I have, I always try to achieve something that I just can’t get to. I feel my whole life was designed—even playing Rudy—was sort of setting the table for playing Sam.”

Sean’s also part of the Ninja Turtle team as the voice of Raphael—he loves it when little kids come to get their Ninja Turtle masks signed. He never quite got into the show in the ’80s and ’90s, but he loves the new stuff he’s involved in. He’s also in the upcoming FX show, The Strain. He worked with Guillermo del Toro on the pilot and we were curious how Del Toro stacked up against Jackson. “Del Toro is a really smart guy and he applies his intelligence in such a bleak manner. He can take a conversation, turn it on its side and drive it off a cliff. He’s a really interesting man, he’s full of life and energy—you just want to hug him all the time and everybody loves him. He’s very serious about his work, it’s all fun and games until you talk about doing the thing and then it has to be right. They both have a similar whimsical quality. I think Peter is quieter on the set, Guillermo communicates using his voice, across the room comfortably. That’s probably the most noticeable difference. They’re both incredibly specific, articulate and there’s no ambiguity in what either of them are looking for when they ask you a question or give you a command.”

It was a fun interview with these fine actors and they are the nicest guys. They went off the rails quite a bit in our group interview and it made it a great time. Instead of just doing a boring Q&A, they had some fun with it.

Click here to check out a complete set of photos from Thursday.