My prediction that Saturday would beat Friday in terms of numbers was absolutely correct. What I was not expecting, however, was that the production and glitz aspect of FantasyCon would also beat the previous two days. The spectacle was bigger, as there was more audience to entertain. 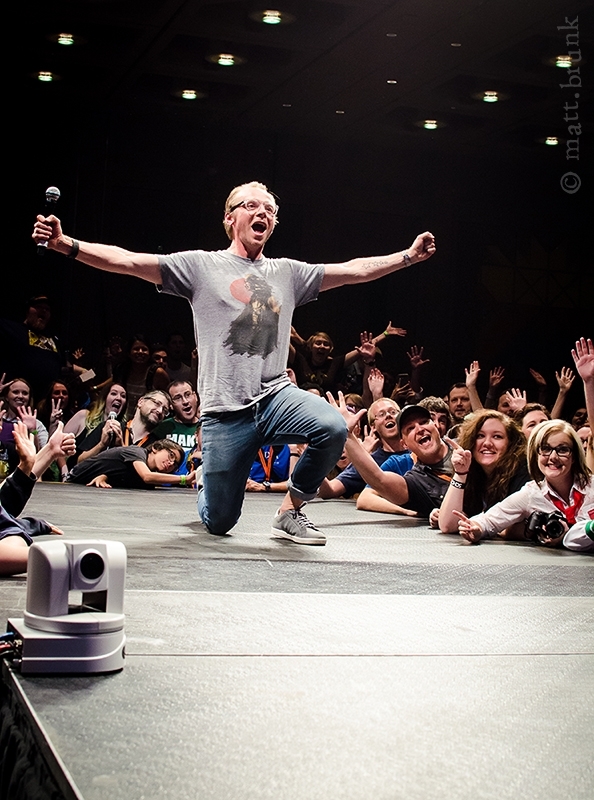 Simon Pegg majestically posing for a portrait in front of a cheering audience. Photo: Matt Brunk

My prediction that Saturday would beat Friday in terms of numbers was absolutely correct. What I was not expecting, however, was that the production and glitz aspect of FantasyCon would also beat the previous two days. The spectacle was bigger, as there was more audience to entertain. Plus, the show’s biggest star had arrived for the day. But I’ll get to that later.

My first stop for the day was a panel focusing on females in the geek community. The title and description of the panel—Females in the Geek Community, We All Still Have a Lot to Learn—had me believing the focus would be more on awesome women in geekdom, but strayed toward bullying in cosplay and the gaming community, and of course touched upon the “Fake Geek Girl” meme. I’m a female in the geek community—surprise, surprise—so the panel was nothing I have not heard discussed before. I myself have participated in lengthy conversations about gender inequality and harassment within nerd culture. Why, then, would we need yet another panel about the topic? I sat in the room, listening to the six female panelists (all cosplayers and gamers, save for one illustrator) talk about their personal bullying experiences when it came to me finally: Women need to keep having these panels and discussions because the harassment keeps happening. Repeated education is something we have to keep pushing forward with if we want to make any change.

I left filled with rage and female-empowerment-gumption and went to stand in line for the Simon Pegg panel. I was not risking not getting a seat for the biggest star at FantasyCon. I got there just in time as the line started to wind through the lobby and hall of the convention center. Once the ballroom was filled to capacity with fans, Simon Pegg came out on stage and ignited passionate nerd fervor. Fans immediately lined up to get the opportunity to ask him questions, queuing all to let him know just how big of fans they were. The first few people to the microphone were under the age of 12 (“I’m only accepting questions from people under 10” he joked) and most of the questions focused on the Cornetto trilogy movies, which children under 10 should not be watching anyway. I was filled with glee whenever someone would ask a question about the television work he’s done (Spaced, you guys. It’s on Netflix.) and too soon his panel was over. Much like Summer Glau, he could use a sandwich, but he was a delight to watch on stage.

I spent most of my time today in the main ballroom it seems, because after Simon Pegg’s panel, I left to get a $10 plate of nachos and returned for the Mark Sheppard panel. The man is mostly known for his character Crowley on Supernatural, so fangirls in the line were quick to ask all sorts of Supernatural related questions. I, unfortunately, am only on season 7 of the show’s currently available 9, so I was plagued with spoilers. I can’t complain—it’s the risk I take. He was brisk and rude, but so adoring of his fans. He was lovable in a douchey way, much like many of the characters he plays on television. One girl started to cry, as she got up to talk to him and he hopped off stage to comfort her. Sheppard was surprisingly touchy with his fans but VERY adamant about not having his picture taken, which was a bit bizarre. I brought a friend to the panel with me, one who has not seen an episode of Supernatural, and once the girl started to cry she asked me, “Is Supernatural really that big of a deal?” YES. IT IS. The fandom rivals that of Sherlock and Doctor Who.

I used the rest of my time today to explore the LARP side of FantasyCon. The battle arena held more warriors than the previous days and even showcased more extreme fighters. Featured at FantasyCon were two groups: the Society for Creative Anachronism and the Belegarth Medieval Combat Society. Both groups focus more on the physical aspect of live action roleplaying, and can be brutal. I have seen, in the past, the use of real weapons with SCA. During their time in the battle arena, SCA did a small fencing demonstration. I still had no idea how anything was played in the battle arena. So, I made my way over to the Belegarth booth where they had posted rules and their points system. Basically, a point for limbs “cut off” and the torso is worth two. There are striking weapons and piercing weapons. In the arena, two groups converge upon each other and, as far as I could tell, when time is up the team with the most players standing won. It was a bit more extreme than the fighting I saw during the second day and even kind of exciting.

Unfortunately, I noticed a lack of LARP group representation. There were the extremes, SCA and Belegarth, but no groups to talk to about more plot based and easier LARP communities. A group called the LARP City Project had a booth and even put on a three day murder mystery plot that concluded on the final day. The group aims to promote a literal LARP city where one can go to be fully immersed in a roleplaying experience. There was a lack of role playing groups, so if anyone wanted to get involved with LARPing based off what they witnessed in the battle arena, there is a bigger world out there that wasn’t represented at FantasyCon. Finding weapons to purchase was a bit of a challenge too (so I heard). There were only a handful of foam weapons for sale. There were, however, panels about building your own armor and weapons and that knowledge goes a long way when you’re maybe a bit too broke to spend $100 on a sword someone else made.

I wrapped up the end of my day with the final cosplay contest of the convention. The contest started about twenty minutes late and I was already so beat from spending all day at the con that I was ready for a nap by the time it started. This contest was hosted by a pair of radio deejays and featured Doug Jones as a judge. The spectacle of this contest surpassed the previous contest, particularly with individual contestant music. Other than that though, it was poorly put together. Contestants cosplays were not explained so many of the characters I didn’t recognize and was not told the name so I could Google it later. They were also swooped out on stage too fast and in too many numbers. Doug Jones totally didn’t hesitate to call the hosts and coordinators out on their shit and it was amazing. He let everyone know they were going too fast and the numbering system was not put together. I wanted a panel that was just Doug Jones calling people out on bullshit.

The awards ceremony for Filmquest and the cosplay contest would be held an hour after the contest ended, but I was so pooped that I had to leave. Many of the cosplays participated in the previous days contest so I can venture guesses as to who won. Cosplay contests are always spectacular to watch but can be so draining. For people who waited until the third day to attend Fantasy Con, great choice. The celebrities were there, and the performances were spectacular. Saturday, the final day, was an absolute blast: fantasy personified.