Friday, the second day of Fantasy Con, had the lucky opportunity to occur on a national holiday: Independence Day. The idea of a Con happening on a holiday where people should have nothing better to do had me worried. The floor would be packed. The parade, any parade in the valley, would make getting to the Con difficult, but deciding to stroll into the Salt Palace around mid-afternoon proved surprisingly easy. Salt Lake streets were empty, as everyone was busy (presumably) barbecuing and setting fires 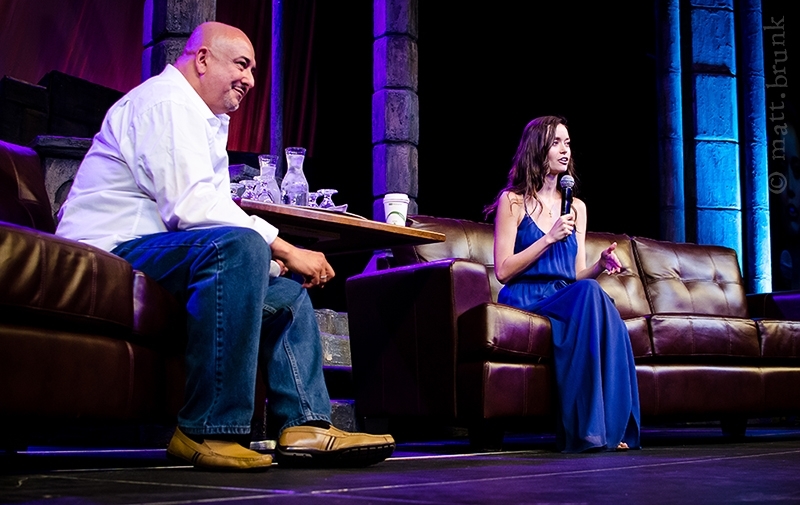 The one and only Summer Glau answering questions at her profile panel. Photo: Matt Brunk

Friday, the second day of Fantasy Con, had the lucky opportunity to occur on a national holiday: Independence Day. The idea of a Con happening on a holiday where people should have nothing better to do had me worried. The floor would be packed. The parade, any parade in the valley, would make getting to the Con difficult, but deciding to stroll into the Salt Palace around mid-afternoon proved surprisingly easy. Salt Lake streets were empty, as everyone was busy (presumably) barbecuing and setting fires. Walking in was quick and, unlike previous nerd-cons, moving was easy. Too easy. Perhaps choosing Independence Day weekend for a convention was a bit of a backfire for attendance, but I was thrilled because I had a chance to really look around and see the floor.

And the floor—Wow. As painful as it is to park at City Creek and walk all the way to the south entrance of the Salt Palace, it’s absolutely necessary. It’s a grand entryway and wow, does it set an awesome first impression. The entryway and floor layout drives home the fact that this is a fantasy con. Not a comic book or pop culture convention, but a place dedicated to bringing all kinds of fantasy fans together. To me, all the lines blur together. But, after walking around, I definitely learned there are distinct fandoms (but no time to learn all of that in one day). I was there to take it all in, and see fantasy as a broad mural instead of focusing on details.

My first stop was the Summer Glau panel in the main ballroom. The stage was set up with a couch and table, and behind it sat a castle and a well-lit backdrop. It started a few minutes late, and I was worried she would be a no-show. I have always had a predisposition to believe Summer Glau was a snotty, stuck-up, bitchy pretty girl. Turns out she is just an amazing actress because she was absolutely the most adorably awkward introvert I have ever seen interviewed. I wish she would eat a sandwich, but she sat up there glowing. Summer answered fan questions with such honest modesty I couldn’t help but adore her and her talent for playing such rough characters. She was very open about her role as River in Firefly and Serenity and how it was a role that changed her life. Her answers were so thought through and articulated, she inspired the hell out of me to work on my vocabulary and consider the way I speak to others. I came in dreading her spotlight and left absolutely enamored.

At the same time as the Summer Glau panel, the Sylvester McCoy panel was happening right next door. I am a bit of a Doctor Who fan (please see all my Doctor Who DVD reviews, they are my forte) so I moseyed on over to the second ballroom to catch the last fifteen minutes of the man who played the seventh Doctor: the last Doctor before the “hiatus.” I walked in and saw the moderator on stage and no Mr. McCoy. His voice echoed through the auditorium and I finally found him after scanning the crowd. Much like me when I’m on the phone, he was moving through the audience and telling stories as he handpicked audience questions. Sylvester McCoy is a rock star—an itty, bitty rock star. He is a short man with a tall personality, and such affection for his fans. I remember seeing him two nights ago at the kickoff party as he stood on stage using a mic stand as a guitar—he was endearing and hilarious. I did, however, almost beat a person as I overheard, “He was in Doctor Who? I don’t remember him.” The plight of new Who fans. I did a few mental stretches, rage tweeted and left to explore the floor as McCoy told the story of how he got started in acting, threatening to go over the time allotment.

The way the floor of FantasyCon is laid out is unlike any con I’ve ever experienced. It focuses on production value and making the trip an experience. Wandering through booths is a journey as you make your way through sections with names like The Hall of Heroes, Kingdom of Emberfire and Drifter Woods. Sure, there is a giant dragon in the middle, but in the lobby there is an immaculate fountain of a dragon and a knight. There is a LARP sponsored battle arena, where you too can yield a foam sword and fight alongside others for … glory? (I think.) I watched a battle for twenty minutes and could not grasp the concept. Two teams fight against each other in some kind of nerdy capture the flag. I ate a plate of Cambodian food while thinking, “Is this what my boyfriend does on the weekends?” (My boyfriend is a LARPer … I don’t want to get into it).

My last panel of the day was the Creator’s Cosplay Contest. Cosplay is an intense artform. Some folks take it so, so seriously and others have a desire to just have fun. It’s easy to discern the competitive from the novice fun-havers, but they have one thing in common: a passion and desire to portray fictional characters as accurately as possible. The contest was judged by five judges, three of whom are professional cosplayers and one is a film costume designer who hand colored all of Ron Perlman’s Hellboy costume. I wanted to shake his hand so bad. The parade of cosplayers featured a few League of Legends video game characters, three Frozen duos and Lord of the Rings characters aplenty. Judges were looking for originality and creativity, characterization and stage presence, character costume description and visual aesthetic.

Costume is only half of a cosplay—acting the part is key to the art as well. As votes were tallied, the host (cosplaying as Rob Stark) was tasked with entertaining the crowd. He used the oldest trick in the book: turning the entertainment duties to the crowd. Audience members told jokes, did stupid human tricks and danced in exchange for Fear Factory tickets. I have to give kudos to the host, I would have dropped the mic once I ran out of fantasy jokes. Spoiler alert: I have none. Prizes were eventually awarded to five different cosplayers. The People’s Choice went to a Thorin Oakenshield from The Hobbit, the Beginner Award went to a self-created merman with a steampunk apparatus to breathe on land, the Intermediate Award went to Lego Batman—with expandable wings—and the Master Award went to a Predator costume worthy of film work. Best in show was awarded to a pair of angels, one white and ethereal and one black, ominous and beautiful. I was awestruck by their dedication to wings. They won $800, deservedly so.

For its second day, FantasyCon was not as packed as I expect Saturday to be. With Trax running and barbeques done, more people should be readily available to get their geek on.

Click here to check out a complete set of photos from Friday.