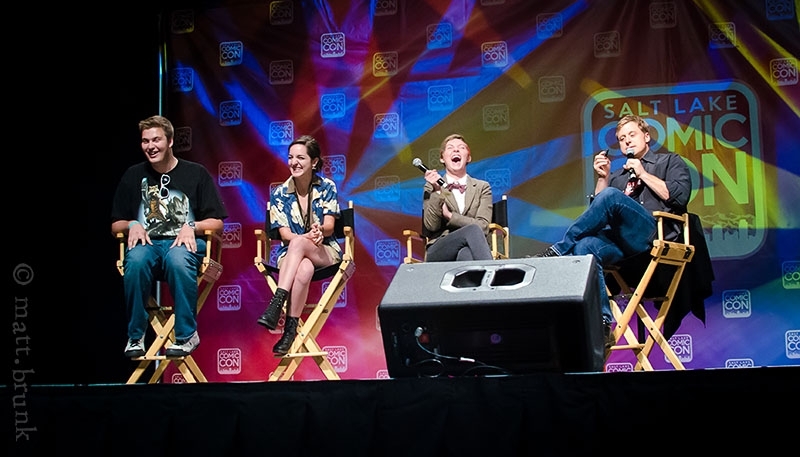 Instead of the typical Q&A, Tudyk invited three people at a time on to the stage with him. Photo: Matt Brunk

Alan Tudyk is a little crazy—everything about his panel was unique. Instead of the typical Q&A, Tudyk invited three people at a time on to the stage with him. From there, Tudyk would ask them random questions—what’s the grossest thing you’ve ever done, what is your favorite animal and why, silly stuff like that.

Some of the audience members had some interesting stories, but let’s be honest, they’re not who we came there to see. While it’s an interesting twist on the Q&A structure, it’s still a little disappointing that we didn’t get more of Tudyk. It is his panel, he can do what he wants—he’s like the honey badger. The on-stage audience members did get to ask questions after answering their own, and believe it or not, there weren’t a ton of Firefly questions. Although, one audience member did get him to re-enact his famous scene with toy dinosaurs.

They ran the gamut over his career—Tucker and Dale versus Evil, Frozen, 28 Days and Dollhouse all got a little bit of play on the stage. The kid who asked about how Tudyk felt about playing the Duke of Weselton was adorable. According to Tudyk, the role had evolved from something of a bit part, to the more involved role of the Duke.

The other odd thing about Tudyk’s panel was that he had a bag of con stuff—truly random things that Tudyk carried around to hand out to the lucky on-stage audience members. After every mini-Q&A session, he would start digging through his bag of ‘shit’, pull things like shirts, hats, even a sweet pair of sunglasses, out of his bag, autograph it and hand it to the audience members. He was charming, and gave every audience member his undivided attention. He made the audience laugh with his comedic timing with his stories and odd mannerisms.