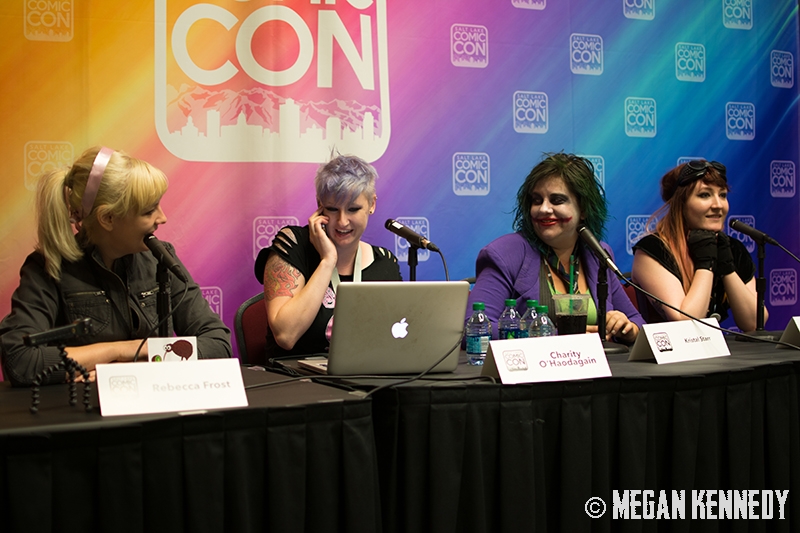 The ladies of Hello, Sweetie! Podcast have certainly come a long way since we spoke to them last. I was stoked to see that, not only had they received their own panel at Comic Con, but as individuals sat on several other panels each, cementing their authority on all things nerdtastic. So it was with great pleasure that I sat in front of SLUG’s Rebecca Frost, newly renamed Charity O’Haodagain (congrats on the recent nuptials!), Krystal Starr and Danielle Uber Alles to watch them record their 130th episode in front of a full room of screaming fans.

The ladies were delighted at the turnout for their panel and began by rehashing how the last two days of con had been for them. I learned O’Haodagain is actually an employee of Comic Con when she received (and proceeded to answer, to great hilarity) a phone call mid-panel from “work.” Starr and Uber Alles talked about the fantastic experience they had working on the panel for the Bechdel Test in Film and TV (“Best moderator ever!”). Afterwards they turned over to audience Q&A, and went down the line to answer their fans about their favorite fandoms, the cosplay they’re most proud of doing and the best cosplay they’ve seen at the Con, and what nerdy item they couldn’t live without on a desert island. The questions were a little softball, but it was a charming show of devotion for these ladies and their work, and not unlike the types of questions other celebrities were receiving in their own panels.