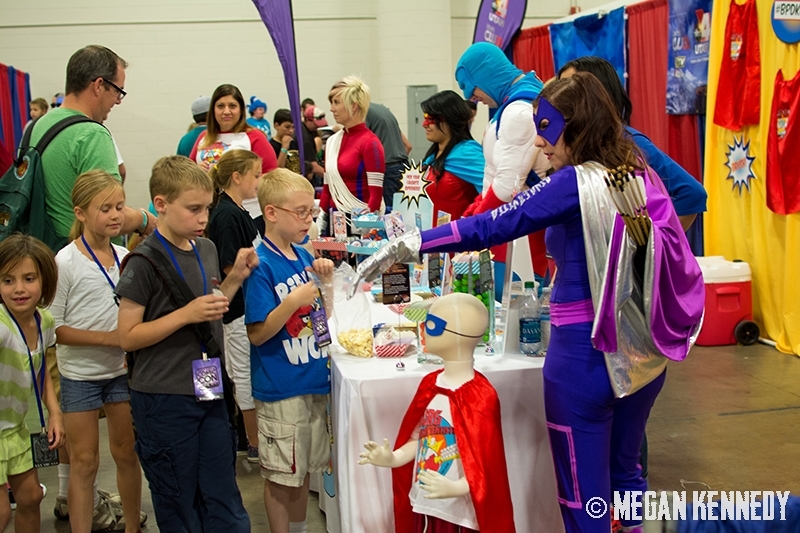 Kid Con was a special area set up on the north side of the convention center that was specifically designated for geeks of that magical age group that got most of us started in geekdom. The area began with arena for robotic demonstrations and competitions which were always crowd-pleasers. The scattered booths in the area included special vendors and charities, crafting and coloring stations, storytellers, magicians, and photo-op areas where families could pose with a Tattooine replica set and land speeder, or during the right hours, get their own portrait with Superman. The Superhero Training Camp was very popular, especially Saturday. Kids sat down and filled out a paper sheet about themselves and their superpowers, and then were sent to ‘training’, where they had to knock down a pyramid of targets with a Frisbee, and then crawl through an obstacle course that looked like a lazer system, if it were made of string instead.

Once kids finished the training, they were presented with a Kid Con Certificate to take home and show off to their lame, non-superhero friends as official proof of their awesomeness. The stage area hosted a bunch of events throughout the weekend, including performances from the Utah Children’s Theatre and a performance by My Dog Zeus, which actually included a real, badass Australian heeler who had been dyed green for the show.  Special guests visited throughout the weekend, like the ever-popular Utah Jazz bear, and Grant Imahara from Mythbusters (who I missed ). It was a really great area for the munchkins and it was always busy, and kids seemed to be enjoying themselves at the various stations. However there was something missing about it for me, and I don’t just mean all the literally empty booths. Quite a few of them were vacant, every day of the Con, which left me wondering if it was just poor planning, or vendor cancellations. Regardless, it left a lot of unused space and kind of gave the impression that much of this area was not a priority.

I think Kid Con could stand for a bit more attention next year, instead of relying on vendors to bring the entertainment.