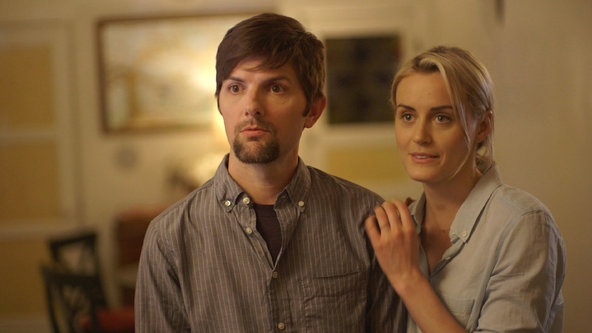 While The Overnight has a few flaws in its execution, the chemistry among the principal actors comes close to making up for them. Having just moved to Los Angeles, Alex (Adam Scott), Emily (Taylor Schilling), and their son R.J. (R.J. Hermes) are eager to extend their social circle. When they meet Kurt (Jason Schwartzman), he invites them all over for an overnight playdate with his wife Charlotte (Judith Godréche) and Max (Max Moritt). After their children go to sleep for the night, the evening becomes increasingly weird and suburban debauchery ensues. It’s the awkward bromance that begins to develop between Alex and Kurt that ends up driving the narrative. Scott is great at playing the slightly neurotic everyman, and he explores his character’s insecurities about his masculinity (or in Alex’s words, his abnormally small dick) with his usual brand of self-deprecating charm. The character of Kurt is the quintessential Los Angeles hipster, and Schwartzman completely owns it. His effortless cool perfectly complements Scott’s nervous tension, and the scenes in which these two bond over art and their penises (both Scott and Schwartzman don prosthetic dongs in a memorable skinny dipping scene) are hilarious. Schilling and Godréche offered solid performances, but their characters didn’t seem as fleshed out as their male counterparts. It’s not a perfect film, but it offers a unique and funny story about what people are willing to do in order to strengthen a marriage.  –Alex Springer