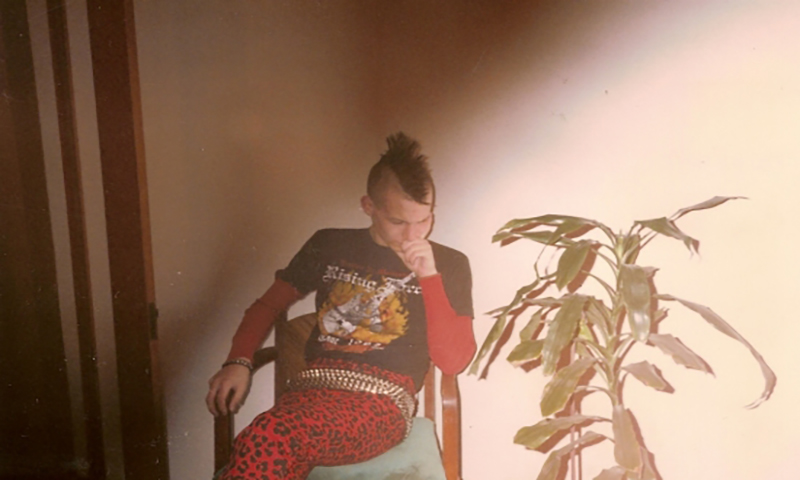 Punk-rock legends are not usually seen wearing Hawaiian shirts, slacks and loafers sitting on their sister’s porch enjoying the summer afternoon. Imagine my surprise that this was the scenario in which I met Salt Lake’s own punk-rock legend Sean Fightmaster – one of the only guys cool enough to become a punk-rock legend without being in a band; a punk-rock personality, if you will. I had no idea who he was when I walked by his porch that day; I thought he was just a cool guy I’d accidentally stumbled upon. I sat across from him on the edge of the porch and we began a casual conversation, leading from small talk into music.

Once we established that the both of us listened to punk, he asked me, “So what do you listen to, Pee Wee?” Band names kept our conversation going, discussing more music, politics and a habit which would inevitably lead him to his end: “punk-rock damage;” his personal pseudonym for his heroin addiction. Sean had fought it for years and after he had finally done some major damage, he decided it was a time for change. “Yeah, man,” he explained to me, “stay away from that shit. When I was in Seattle, I checked myself into rehab for punk-rock damage. That shit’s bad, Pee Wee, stay away from it.”

“Hey,” his sister Cydnie yelled to me as she came out of the house. “Do you realize who you’re talking to? This is Sean Fightmaster,” she said to me, enthused. I still had no idea, but I recognized the name and where I had heard it slowly crept into my brain.

I made a bad pun about his last name (which I’m sure was not uncommon) to which he replied, “With a name like Fightmaster, you have a reputation to live up to. I may not always have [lived up to my reputation], but I sure as hell tried.”

His name finally clicked and I traced it to “that dude that trips out on acid” from SLC Punk! I brought up the movie and Sean began discussing it with his sister.

“I hate how that movie made our family look,” Cydnie said. “It’s bullshit.”

“Yeah, it was,” Sean chimes in. “I want to … re-make it.” I admired Sean’s desire to re-make a film that made him somewhat famous (more or less Frank N. Furter to Forrest Gump. Not to say that Sean was a transvestite or handicapped), but with an outsider’s perspective, I understand why. If The Passion of the Christ was all bullshit, I would imagine Jesus would want to re-make it, too.

I left shortly thereafter and couldn’t help but think that Sean was one of those genuinely awesome people that one would meet in life’s many serendipities. Unfortunately, the next time I would see him would also be the last.

It was mid-October and as I walked into Orion’s Music in Sugarhouse, I saw Sean talking to Leif Myrberger, the clerk, about a CD he had ordered. He ordered MIA by The Germs and Weathered Statues by TSOL. Around this time, he had also been ordering numerous Crass albums. I said hello and was greeted with a, “Hey, Pee Wee, what’s up?” I proceeded to tell him about an acquaintance of mine that had recently overdosed. “Fuckin’ junkies,” he said, sounding angry. “That’s stupid shit, man. I fucking hate junkies.”

I see this last run-in with Sean as one of those slap-in-the-face ironies. Sean had told me about his struggle with junk, and I had thought he had conquered it, yet two months later I found that the junk had finally conquered Fightmaster. It’s like the days in elementary school on the playground where you play-fight with your friends. You wrestle and roll around in the dirt, laughing as you go along. You say you won’t actually hit each other, but then you get slugged in the face by your friend. Not only does it hurt, but you’re left shocked, bewildered, asking yourself, “What the fuck just happened?” At the time, it seemed impossible for such a thing to occur, having been told it wouldn’t. Luke McCabe, a friend of mine who also knew Sean, said, “That’s just like Fightmaster … he couldn’t stand to go out by someone else’s hand, so he went out by [his own].”

The heavily exaggerated story of Sean in SLC Punk! gave him his 15 minutes, but Sean turned himself into a legend, leaving an impression (good and bad, I’m sure) with everyone he met. He will be greatly missed by those who had the luxury of meeting him and commemorated by those who didn’t. As the saying goes: Heroes get remembered, but legends never die.