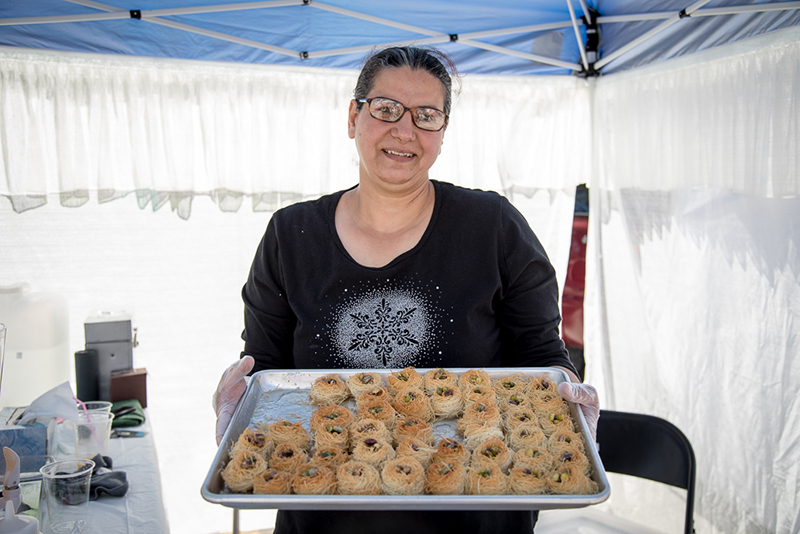 At this point in Salt Lake’s culinary evolution, we have a solid representation of Middle Eastern cuisine. I can think of at least five restaurants along the Wasatch Front that do a fine job of exploring the nuances and flavor profiles of countries like Iran, Iraq and Sudan. What most Western diners don’t know is that the desserts from these countries are just as flavorful and enticing as their lunch and dinner offerings, but Middle Eastern bakeries are a bit harder to track down. However, thanks to some help from Spice Kitchen Incubator, Chef Saadiyah Hassan’s Ashikat Kitchen has been popping up at farmers markets and other community events, creating more awareness of these Middle Eastern desserts. Hassan spent her childhood in Jordan and Iraq, where she recalls cooking and baking with her parents when she was 8 years old. “My grandparents passed their passions and talents through my parents and then to me,” Hassan says. “My parents gave me a lot of experiences, and I thank them for this.”

Middle Eastern pastries and desserts are of a different breed than the beloved sugar bombs that Western diners have come to enjoy—texture often takes precedent over sweetness. Hassan’s menu is based on bringing both worlds together to create something original. “I take a lot of care creating a dish and making things look beautiful on the plate,” Hassan says. “I can make familiar dishes feel and taste unique by including different ingredients and putting a new spin on them.” Attendees of Craft Lake City’s DIY Fest can expect to see Hassan’s trademark Bird’s Nests, which consist of thin noodles rolled into a crispy, golden brown bed to nest some pistachios. She then drizzles the pastoral creation with a homemade lemon syrup and honey. Hassan is also known for her Magic Cupcakes and Turkish Doughnuts, which blend the easily recognizable desserts with Middle Eastern flavors like cardamom and rose water.

Ashikat Kitchen is currently accepting catering orders via Spice Kitchen. In addition to her appearance at Craft Lake City’s DIY Festival, you can catch Chef Hassan at Wheeler Farm every Sunday until October. –Alex Springer