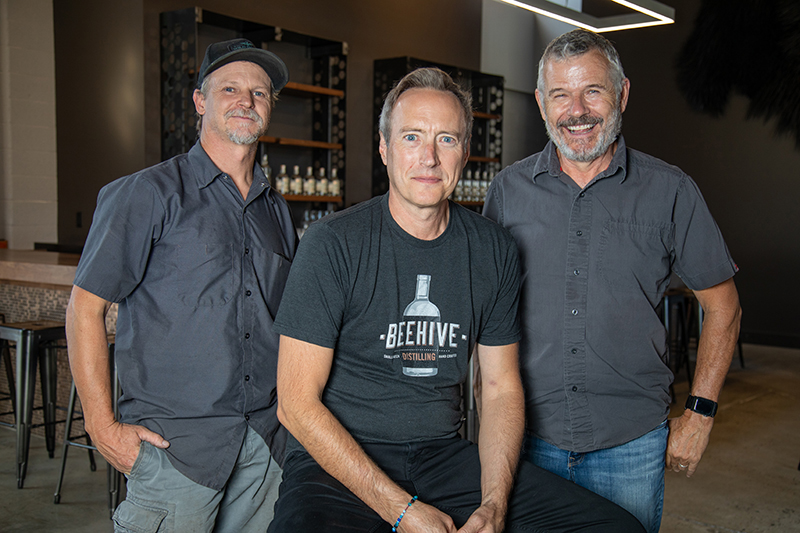 For years, Beehive Distillery has crafted local spirits to be enjoyed by many in their homes. It has become a household name among lovers of locally crafted spirits. As Utah progresses and demand for Beehive Distillery’s drinks continues to grow, the distillery owners Erik Ostling, Matt Aller and Chris Barlow saw an obvious need to create a space that was more than just a private distilling area. As a result, in the middle of September this year, the distillery opened a new location, Beehive Distilling, to the public, ushering in a new era of craft distilleries and bars in the Salt Lake area.

Inside of a simple-looking warehouse in South Salt Lake, there is shiny, brass equipment that towers within Beehive Distilling, one of the newest and most unique bars in the area. What started as a shared love for quality spirits between friends and coworkers turned into a full-fledged business, giving both Utahns and liquor lovers worldwide a taste of the Wasatch Front for half a decade.  Ostling, Aller and Barlow started Beehive Distilling five-and-a-half years ago, after sharing liquors with each other, along with a curiosity of how they were made.

“If someone went out of town, they would bring back a nice scotch or a type of tequila,” Aller says. “Soon, the discussion started to be about ‘What if we made some? What about distilling? Can we pull that off?’” The group set out and looked into the idea. “We like to drink, and we decided to go pro,” Aller says.

Soon after the initial idea, the three got their first space, Beehive Distilling. Ostling says that tourists and locals would frequently contact the distillery asking if they did tours or if there was a way they could find out more about the distilling process. After five years, the three decided to finally open up a bar area to give people a glimpse into the inner workings of their distillery, leading to Beehive Distilling as we know it now.

The team’s architect friend, Benjamin Baird from Blackbox Design, help them design the interior, and they began distilling. “We started to have this idea of a bar where we could feature local-crafted spirits and beers, and at the same time educate people on what we are doing in the back, in the distillery,” Ostling says. “It gives us a nice chance to show people where the stuff is made and give them a little lesson on how it’s created.”

After much preparation, the three opened the doors to the new location of Beehive Distilling, becoming a fresh face near 2100 South and West Temple. Their walls are lined with art created by locals, their taps runneth over with locally crafted beer, equipment reaches toward the ceilings in the back and the S-Line TRAX streetcar conveniently passes on the train tracks to the south of the building. Bar patrons can relax in a sleek, modern-looking and spacious area, either on couches or at the long bar and try out specialty cocktails designed specifically for distillery visitors.

“One of the things I think the local distillery scene has done has really opened up Utah to people from out of state who want to see and visit these types of places.”

“This neighborhood, South Salt Lake, is really coming up right now,” Ostling says. The location of Beehive Distilling, though not purposeful at first, ended up being ideal for Ostling, Aller and Barlow, as South Salt Lake continues to grow and become more developed. “Big changes are slated for the whole area, and we accidentally bought in the center of it. We love our area, with the train in the background and all the new developments going up,” says Ostling.

The opening of Beehive Distilling is similar to High West’s presence in Park City, as it has a working distillery and bar, however, Beehive will be the first in lower-elevation Utah. “One of the things I think the local distillery scene has done has really opened up Utah to people from out of state who want to see and visit these types of places,” Ostling says. The three say that the bar fulfills this need and a desire for tourists who have been wondering for years if a bar was going to open or if tours were going to be made available.

Ostling says, “Governor Huntsman, back in the day, relaxed some laws that really helped, especially during the Olympics.” Now, Ostling says the view of Utah is changing even more and has allowed local distilleries like Beehive to succeed. “Distilling in-state and the brewing scene in-state has really helped outside perception of Utah,” says Ostling, who believes that in terms of tourism and the vibrancy of culture in our state, having places that showcase locally brewed and distilled drinks is key.

“We like to drink, and we decided to go pro.”

With the demographics of Utah rapidly changing with the growth of tech jobs in the state and more people moving in, there is a need for more culture, more things to do and a more vibrant bar scene. Beehive Distilling hopes to be at the tip of that new wave of businesses that help serve those demographics and to become a hub for the new type of Salt Lake City and South Salt Lake resident.

Similarly, as the public focus shifts further away from national brands of alcohol, Aller, Barlow, and Ostling hope to provide craft liquor enthusiasts with more of what they love, in a comfortable and modern bar setting. Come take a look at everything Beehive Distilling has to offer, and learn more on their website. You can also find Beehive Distilling at SLUG Mag’s Boo!stillery at The Union Event Center on Friday, Oct. 18.

Booze You Should Choose
Beehive Distilling: Out of the Bathtub, into the Barrel