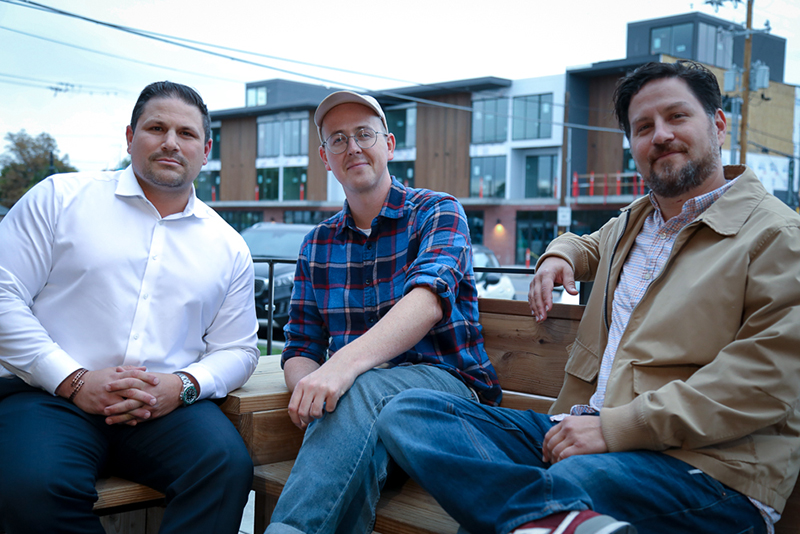 A Priest, a Minister and a Rabbi Walk Into a Bar: Congregation Spirits

There’s something new coming to the North Temple corridor—a place of meeting, community, food, drink and a pulpit to enrich minds with knowledge and culture. The Euclid neighborhood, known for Red Iguana 2, is a district that Sean Neves, Scott Gardner, Matt Pfohl (co-owners of Water Witch) and Bryan Wrigley (of Lotus Urban) are excited to highlight with their newest community-focused endeavor. Congregation Spirits, will be a property just under one acre, consisting of the Congregation distillery, a bar and grill—Standard Candle —and a beverage-production education center.

This team has had their ears to the pavement, waiting for an opportunity to implement their passion for community in this part of Salt Lake City. With zoning laws concerning Utah’s strict liquor restrictions having changed recently, the door has opened to bring this area an amenity it doesn’t currently have—a full community bar. With Wrigley having background in community development and Neves, Gardner and Pfohl having experience in creating and running bars, this team came together to harness potential in places like Fairpark, Poplar Grove, Glendale, Euclid and Rose Park. This was the setup via which Congregation Spirits is coming to fruition. Wrigley says, “[In these areas,] You have super loyal and dedicated neighbors … Though there’s nowhere to go for bloody marys, mimosas, Sunday brunch or beer after work.”

When discussing the development of Salt Lake City, the team’s vision is clear. The team’s intentions are not to “find the next new hip spot in town to open a bar,” but to listen to what this area needs and their individual skills provide it. Gardener says, “If we do our job right, we will provide a place for the neighborhood—a neighborhood watering hole.” The Congregation team presently aims mainly to hire people from the community that the establishment’s reside in, with plans to teach and train employees about everything they need to know.

The grand idea for Congregation Spirits poses many intricacies that could not be expressed in only one feature. The distillery will produce brandy, whiskey and gin. “The stills that we have were hand-hewn in France in the 1800s, made in Cognac,” Neves says. “They were stored in a barn during WWI—they were very rare pieces of metal for that era. These stills were brought to America by Huber Germain-Robin to open up his distillery. In fact, they have Germain-Robin’s family stamp.” The stills use direct fire, and the firewood comes from the trees that produce the fruit for the Standard Candle dishes. Applewood and cherrywood will be sourced locally, “root to fruit” they call it—no part of the tree goes to waste.

Standard Candle will be a wood-fire bar and grill. “For some reason, no one is working with live fire in Salt Lake City,” says Neves. They call the bar and grill “hyper-local.” “We are focused on organic, locally grown vegetables that touch the fire,” Wrigley says “We are focused on organic locally sourced meats that are touching the fire. Everything touches the fire.” The Spirit Garden (a biergarten) within Standard Candle will be another source for community gathering, about which the team says there will be more information in the future. What Wrigley can say now is, “There is so much that we plan with programing the Spirit Garden. I have never seen what we plan to do here in any other city in the country.” This is intended to be a gathering place for the neighborhood and West Side community that doesn’t involve getting a ride across town.

By remodeling a house on the Congregation property, the team will build a small school to teach neighboring residents about beverage production. Gardner has been bartending, managing beverage programs and educating about spirits for about 12 years. Working with places like Finca, HSL and Naked Fish, Gardner (along with the rest of the team) has the skills to spearhead the educational aspect of Congregation Spirits. “We are most focused on educating people on the basic craft, the technique, the ingredients,” says Neves. When hearing about having class at a distillery/bar, most are led to assume that they will be learning about how to make a lemon drop or the difference between whiskey and brandy. This program is deeper than that. “I think cocktail training is putting it into a box. The focus is on the actual raw ingredients that would go into a cocktail, rather than what goes into a drink,” Gardner says. “We can offer education on what is in your glass, from the time that it comes out of a field … fermentation, sorting, transport … We want to offer people a peek behind the curtain of alcohol production.” In addition to offering a place to learn and relax while doing it, Gardner says, “Every campus wants to have a bar and a place to get a bite,” making Congregation an ideal location because it has both the restaurant and bar on the same property.

In the fall of next year, Congregation Spirits will open their doors, and the Euclid, Rose Park, Fairpark and other local neighborhoods will be welcome to come together to take part of the service. Neves says, “It is a beverage-production campus … We are building an urban winery and brewery with extra equipment on it.” This is a simple way to express a grand idea with such a grand impact. A place to gather is essential for communities to cultivate ideas, and relationships, establish educational spaces and make local history. Congregation Spirits will truly be a well-spirited gathering place and, as they put it, “adult playground,”  (long overdue) for this community. Learn more about Congregation Spirits on their website, CongregationSpirits.com.