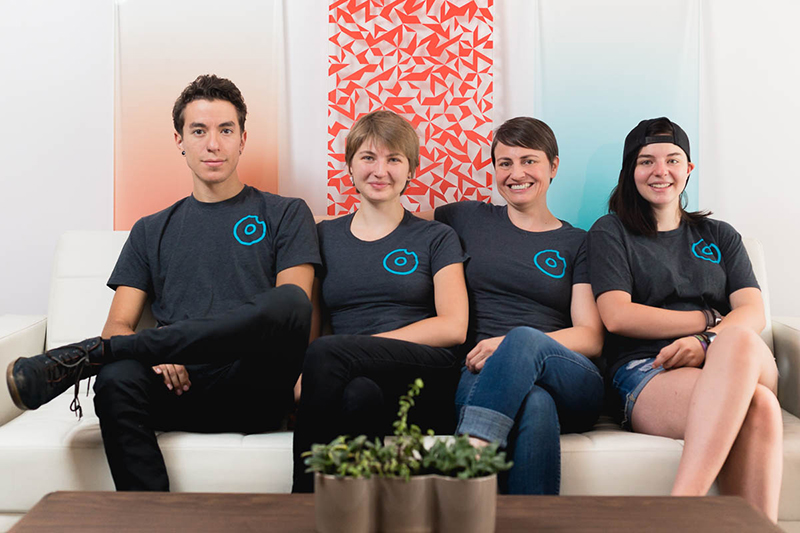 Three months ago, a brand-new, family-run hotspot popped up on Broadway called The Big O Doughnuts. If you haven’t already heard, they’re deep-frying a creative spin on a classic favorite. In a short amount of time, this completely plant-based, locally sourced shop is making a big name for itself among vegans and non-vegans alike for its uniquely delicious vegan doughnuts, and owner Jess Curzon is eager to see where this shop takes her.

It all started at a farmer’s market in the International Peace Gardens. “My daughter, who’s completely vegan, was telling me about how much she wished there was a vegan doughnut for her, and so we went home and I tried out some recipes,” Curzon says. “That’s when we found that this could actually be a thing.” From that moment on, Curzon and her daughter set up shop every weekend at the People’s Market, selling doughnuts to those who were interested, and to her surprise, she garnered quite a large following. She tried new recipes every day, which led to renting out a kitchen and expanding her knowledge of doughnut-making. That’s when Curzon started selling a couple dozen of her treats a week to places like Sugar House Coffee.

As word got around that there were delicious vegan doughnuts being sold, everyone wanted to get their hands on one. “Keeping my finger on the pulse of demand is really what made me decide to open up a storefront,” Curzon says, “but it wasn’t completely planned. [My business partner] Zak Farrington and I were driving down Broadway and we saw this space for rent … That same day, we signed the lease. It was all very spontaneous.” Once she realized that she was taking on her own business, she knew that it would be a challenge, but the uncertainty only propelled Curzon to prove to herself that she could make this business happen.

Since opening their storefront, it doesn’t take long for Jess and her crew to sell out of doughnuts before closing time each day. “It feels really good, knowing that we have such a big following,” Curzon says. “I feel like I have a responsibility to deliver good products and answer to our customers. I’m constantly wanting to make things better for them.”

Customers can stop in for treats Wednesday through Friday from 8 a.m. to 2 p.m. and on Saturdays from 9 a.m. to 3 p.m.  Since the hours of operation are so particular, customers hurry over each day for their pick of the bunch, a cup of coffee and the homey feel of The Big O’s shop, especially on Friday nights, when the store hosts Doughnuts After Dark, which starts at 8 p.m. and goes until 1 a.m. With flavors like orange cardamom, rose, maple pecan, matcha and fresh peach, there’s something for everybody, whether they’re omnivore or vegan. “A lot of people come in to try the blueberry lavender doughnut,” says Curzon. “It’s definitely the most talked-about flavor, but the maple pecan has to be one of my personal favorites.”

Big O’s overall mission is to give people a “gourmet food experience” by using real, naturally sourced (when possible) foods to craft flavors with a heap of creativity. Curzon hopes to make her treats more accessible by increasing her shop hours in upcoming weeks—that way, hungry customers can grab a doughnut at more convenient times. As far as plans for future growth goes, Curzon is anticipating to maximize what she has in front of her. “Good gut instincts play a part when it comes to my decisions,” Curzon says. “I don’t really ‘plan.’ Things just happen!” She does, however, have plans to bring in her own espresso machine due to popular request. “An espresso machine is on the horizon,” she says. “I thought we could open up shop without having anything else besides doughnuts, and I soon realized that people really want to be able to have a cup of coffee with their doughnut.” Although an espresso machine is in the works, you don’t have to go without a cup of joe. The Big O Doughnuts currently offers drip coffee from Blue Copper, which is just as satisfying and delicious as their doughnuts.

Since opening in the beginning of June, Jess Curzon and her family have created a large and dedicated following. They’ve given the vegans of Salt Lake City a variety of doughnuts to indulge in, knowing a lot of love went into their making. Big O’s social media accounts are updated constantly to showcase the flavors that are up for grabs each day, and their website, thebigodoughnuts.com, is the perfect place to go for catering information and answers to general questions. They also have a feature on their site that makes it possible to order doughnuts in advance, so no one has to go without their deep-fried piece of heaven. This small business is growing every day in the heart of Salt Lake City, and it’s well worth stopping by to find the perfect doughnut for you.