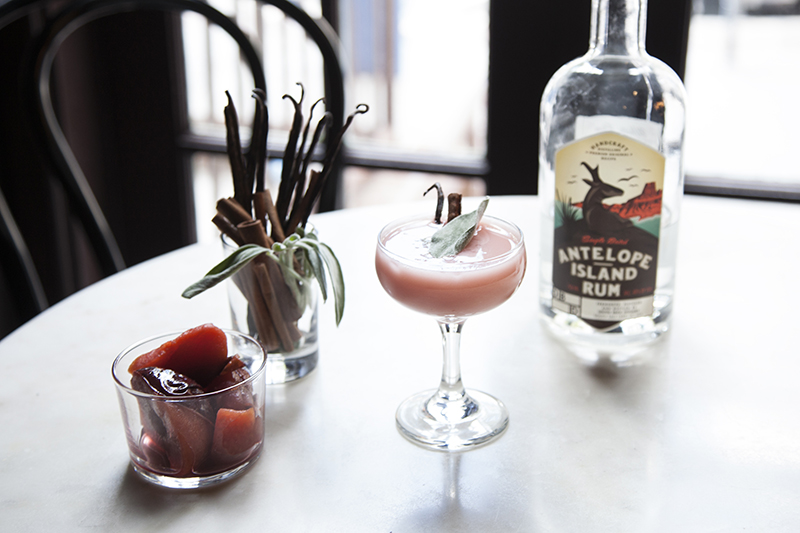 Now in its sixth year, Salt Lake Magazine’s Farm to Glass Cocktail Contest will bring together 24 of the city’s most visionary mixologists to handcraft an original cocktail that uses local liquors and at least two ingredients sourced from Utah farms. Voting runs throughout the month of September, the height of Utah’s harvest season. Folks will have a delectable excuse to indulge in expressive local flavors via drinks that range from the bold and complex to the simple, subtle and satisfying. See the boldface in the listed ingredients for each cocktail’s local elements, and for information about the contest, voting and awards reception, visit saltlakemagazine.com.

For Finca Bar Manager Natalie Hamilton, her initial love of learning about wine drew her to the art of the craft cocktail. After completing Finca’s bar program and falling for the inspiring food and drink scene in Salt Lake City, Hamilton has since gone on to play a major role at the popular contemporary–Spanish cuisine destination, where for over two years, she has enthusiastically honed, experimented with and innovated her craft. “It’s like cooking,” says Hamilton. “Not every dish works out perfectly, but you keep learning and getting better the more you try.” Hamilton endeavors to incorporate adventurous ideas and concoct well-balanced flavors that complement the big, reimagined flavors of Finca’s tapas, but she also aims to showcase local ingredients, recognizing the importance of connecting someone’s drinking experience with “what is naturally abundant around them,” she says. “A lot of love goes into local produce, and passionate people who are doing what they love are making our craft even better. We are lucky to live in a place with local produce accessible to us in such a high quality!”

After traveling and sampling the world with his grandfather—“whose first loves were family, food and travel”—Takashi manager Richard Romney developed a passion for food and the restaurant industry, and has since spent the last decade as a mainstay at Takashi, one of Salt Lake City’s most beloved sushi bars and Japanese eateries. As a developer of Takashi’s cocktail menu, Romney has used the small size of the restaurant’s bar to his advantage by limiting and curating the scope of offerings: “[I] have really made it my goal to have a unique, fresh, Japanese- and local-focused menu,” says Romney, who emphasizes Takashi’s overall inventiveness and consistency—traits that, along with personality and balanced flavors, Romney imparts in his cocktails. “All of our drinks are designed to complement the food and not overpower the often subtle flavors of sushi,” he says. “A fantastic cocktail can be simple, complicated, refreshing or brooding.” In imagining a Farm to Glass cocktail, Romney first selects a local ingredient and then builds the drink—last year, Takashi’s Pura Vida involved a house-roasted chile shrub that took at least one week to prepare; this year, Romney will present an evolution of a previous cocktail that uses a portion of honey sourced from the beehive on the Takashi rooftop.

Kestrel and Jerry Liedtke’s art and dining experience, Tin Angel, has lovingly served farm-fresh ingredients and eclectic flavors since the husband-and-wife duo first opened the restaurant in its Pioneer-era home over nine years ago. Kestrel uses local ingredients not only because she values and supports Utah growers, but also because local crops “can be grown for a much more expressive flavor profile,” she says. In taking those remarkable flavor palates to the Tin Angel’s cocktails, Kestrel explains that their menu reflects the restaurant’s values. “Our relationships with local distillers, growers and farmers are represented in our cocktail list,” says Kestrel. “We hope that people can sense the care we have taken and the fun we have had when they dine with us.” When asked what makes for a fantastic cocktail, Kestrel says, “Honestly, trial and error, experimenting and tasting,” and suggests infusing liquors with herbs as an easy method to incorporate local ingredients. This year, the Tin Angel will present one of their classic cocktails, the Gin Angel. “I just love the aroma and experience of gin, but gin is a bit of a fickle mistress,” says Kestrel. “She doesn’t go with any old mixer. You have to find her a partner she can dance with.” How about something local?