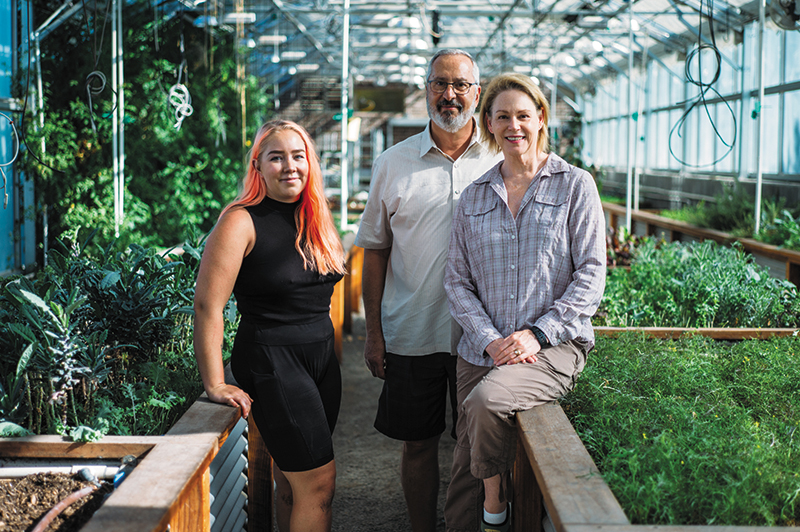 Nearly everyone has a memory, either distant or near, of an interaction with freshly picked food, straight from a garden. Some of life’s most basic pleasures include shucking peas and eating them while standing in the dirt, picking handfuls of never-bitter raspberries that melt in the mouth or topping a salad with flavorful tomatoes that haven’t yet cooled from the sun. Sadly, not everyone has the ability to have a garden. That’s where Frog Bench Farms comes in. Tucked away in a suburb just below Foothill Boulevard, a 1.5-acre organic farm produces fresh vegetables, fruits, nuts, edible flowers and microgreens for local restaurants.

Started in 2012 by owners Joe and Paula Sargetakis and managed by farmer Stacy Semborski, the farm produces veggies that are supplied to restaurants within a five-mile radius. Speaking as to why they started the farm, Paula says, “We grew up, both of us, where our families had gardens—botanicals as well as edibles. My grandma and my great grandma both had nice farms or gardens that they grew their veggies out of.” A few, but not all, of the restaurants they supply include HSL, Pallet, Provisions, Eva, Table X, Pago, Stanza, Tulie and Zest (a full list can be found on the FBF website). It seems impossible that such a relatively small farm can provide supplies to so many high-end restaurants, but seeing is believing. The farm is not open to the public, but SLUG was able to get a peek behind the curtain.

“We grew up, both of us, where our families had gardens—botanicals as well as edibles.”

It all starts in the basement of the Sargetakis’ home. They have rows of microgreens under lights, their tiny green shoots reaching for the lights above them. “They’re almost, in a sense, a baby plant,” says Paula. “You’re getting them as they’re pulling all of their high nutrition out of the seed. They’ve got a lot more oomph when you eat them. The flavor’s brighter—it’s more intense—but they’re just small plants.” They harvest these once a week. They have many varieties, including cabbage, basil and pea shoots. Tasting one of the latter is to experience all of the good sweetness of greens, with none of the bitterness that can occur. These small greens are flanked by four 1,250-gallon water tanks that look like plastic submarines. “For the majority of the year, we collect enough water that we can just completely [farm] off of this,” says Paula. “This is the harder time of year, the end of July, beginning of August, when everything is really dry.”

Being almost completely independent of the city’s water system is only the beginning of their efforts to be sustainable and low-impact. They have solar panels on the roof of the residence, and they recycle and filter the water used to rinse the vegetables in their onsite commercial kitchen before sending it back outside to water the field and greenhouses. The glass of their largest greenhouse is sprayed with an opaque solution of water, buttermilk and pottery clay that prevents the inside from overheating or requiring excessive cooling during Utah’s hottest months.

“You’re getting [the microgreens] as they’re pulling all of their high nutrition out of the seed. They’ve got a lot more oomph when you eat them.”

With having such a small amount of people tending the plants, the Sargetakises have invested in automation to compensate for fewer people. “There’s a weather station on top, then there is this tiny, little yellow box [inside the greenhouse],” says Joe. “Those sensors say what’s happening inside the greenhouse and outside the greenhouse. There’s the solar puck on the weather station. It actually does it on a rolling-15-minutes cycle. It says if we’re below 10 milliwatts of sunlight, of direct sunlight in the greenhouse; then it will do what it’s done now, which is to open up the shade cloth.”

Walking around the property, the sheer density and variety of the plants is astounding. There are peppers growing near blackberries. Across the aisle are grapes they use for personal-use wine. Mint, oregano and sage all lend to a beautiful cacophony of fresh aromas. Touring the facility on foot, I was encouraged to taste a variety of things, all of which tasted like amplified versions of what can be found on the grocery shelf. It is reminiscent of tasting one’s first pineapple in Hawaii—knowing that such a potent version of the fruit can’t be obtained in the mainland is a disappointment, so one almost wishes to have remained naïve.

“We want to be an educational tool.”

Since the farm is not open to the public either for tours or orders, the Sargetakises say that the best way to interact with their products is to patronize the restaurants they supply. A quick inquiry into what the restaurant received that week (it varies depending on what is in season) from Frog Bench Farms should suffice. Chefs receive a text of offerings on Mondays and often tailor their special menu offerings based on what is in season. Chefs can also get deliveries on Thursdays for the busy weekend. The Sargetakises also collaborate with local chefs growing special orders for them for specific dishes.

Frog Bench Farms offer tours to local school groups as part of their mission from the beginning was to be a beneficial part of the community. “We want to be an educational tool,” says Paula. “We do a lot of tours with groups that are interested in different farming techniques. We’ve done some garden clubs just so they can learn how to do different things. That’s the emphasis of it. Plus, we were just environmentally driven people.”

Pallet: Spooning Up Something New
X Appeal: Table X is Fixing to be the Ryan Gosling of Millcreek’s Restaurant Scene