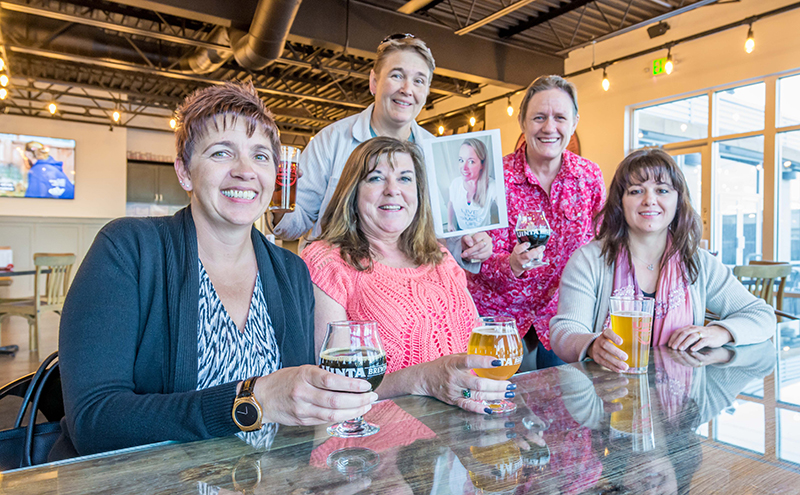 Why settle for a girls’ night out when you could have a girls’ pint out? Girls Pint Out (GPO) was born out of a need for women to connect with each other while exercising their love for craft beer. GPO got its start in Indianapolis by founder Amanda Wishin and has since spread to dozens of chapters countrywide, including Utah’s very own Salt City Girls Pint Out.

Crissy Long, the Salt City GPO chapter head, is a Utah-local, a craft beer drinker since the early ’90s, and a brewer since 2014. She’s a born-again IPA fan and self-proclaimed stout girl. “The love affair began at McMenamin’s Pub in Oregon, when I was introduced to a beer called Terminator Stout,” says Long. “It poured so gloriously dark and chunky that I thought for sure you couldn’t call it beer.” The rest was history. While her fascination grew, Long was always on the lookout for other women who shared her taste for good beer and good company. “I wanted something that was easy, relaxed, with no agendas—just women and beer … so, in all honesty, I hit Google,” says Long, who discovered GPO and immediately reached out to Wishin about the possibility of a Utah GPO chapter, which became a reality in December 2015.

GPO builds relationships between like-minded women and supports them as active members in the craft beer industry. Long says, “The craft beer community was seen for many years as a ‘man’s world,’ but as time has gone by, more women have made splashes in the community through brewery ownership and Head Brewer positions,” something to be celebrated and encouraged. While GPO is women-focused, “this group is not about excluding men but, rather, including women,” says Long. “It’s about empowering women to learn, to grow and to just enjoy each other.”

There’s more to it than just drinking beer, though. For many chapters, being part of GPO “means being very involved with the local breweries and the craft beer scene in general, from festivals to charitable events and more,” Long says. The realm of possibilities to explore the craft beer industry are endless, really. One GPO chapter even collaborates with “MobCraft Brewery, in which each chapter submits a recipe, and the one with the most votes will be brewed and sold by MobCraft,” says Long.

Some events are “drink and enjoy,” while others are “feel good; do good.” “Each year at Christmas, we have a Winter Bottle Share and charity drive,” says Long. “This past Christmas, we gathered around 100 pounds of food, blankets and toys for fur babies [at the Humane Society]. This year, I plan on adding another event for a women’s shelter.” Long and Salt City GPO are quickly filling up the local calendar with monthly events and meetups.

Salt City GPO is the only Utah chapter, but as the craft beer scene continues to grow and more women join, there may be opportunities to create more Utah chapters. Joining requires no membership fee or contribution, just a love of beer and the ability to laugh, smile and have a good time. “We’ve got a long way to go before we are truly integrated in the craft beer community here in Utah,” says Long, “but beer by beer, we will get there.”

Long has been a positive and driving force, from organizing to education. She is “always trying to teach the group about different styles of beer,” she says, and she hopes to form new relationships and collaborations with breweries around the valley to offer education for women on brewing and glassware. With her head in the hops, she has grown to “learn and appreciate the nuances of the different hops and what they can bring to a beer,” and wants to share those explorations with others this summer through a “brew your own beer” event.

While Utah has its quirks and challenges when it comes alcohol, there are plenty of folks—particularly women—who appreciate craft beer. “You can see this in the brewery growth over the last several years,” says Long. “Having been raised in Utah, I’ve seen an interesting shift in the attitudes here, and it’s exciting and refreshing.” From The Bayou to Beer Hive, Salt City GPO indulges in some of Utah’s best brews, takes local-brewery tours, goes bowling and (not surprisingly) bonds over the outdoors.

Long created a Progressive Pints event, where Salt City GPO picnicked at Lakes Mary, Martha and Catherine in Big Cottonwood Canyon. Each visit entailed food and beer assignments. “Lake Mary was appetizers and a beer, Lake Martha was lunch and a beer, and Lake Catherine was dessert and a beer,” says Long. “The beer and the food was amazing, but the company was even better. We talk, we share stories of our lives, we learn about different beer styles and we laugh.”

Summer is just around the corner, and so is the GPO Brewery Tour event on April 24—brewery TBD. The May meetup will likely be a short hike and bottle share, while the infamous Progressive Pints hike will be in June and the home brew in July. Facebook (@SaltCityGPO) is the best way to get event updates, beer news and details about Salt City GPO. Come thirsty, leave happy.