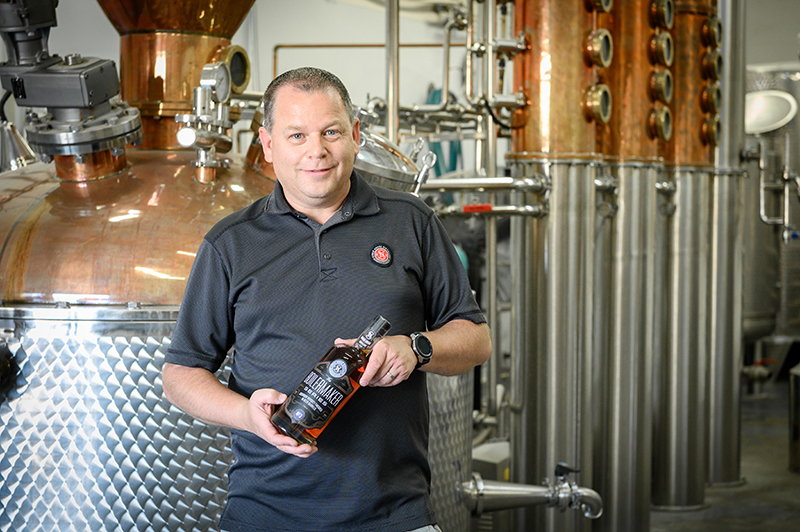 Now more than ever, traits like authenticity and craft become more important to the conscious consumer. Passion in the craft and ingenuity are just some of the important values that owner James Fowler takes to heart while overseeing the creation of spirits at Sugar House Distillery. For the better part of seven years now, Fowler and his team have been busy constructing not only a great product but also an acceptable environment for distilling amid Utah’s uniquely strict liquor laws. Liquor laws and bureaucracy aside, Sugar House Distillery puts good work into making a great product, their Boilermaker Series.

For the Boilermaker Series, Sugar House Distillery pairs up and finishes bourbon with local breweries’ barrels. Years past have included a collaboration with Uinta’s Cockeyed Cooper release—which Fowler boasts as “his personal favorite”—along with Epic Brewing’s Smoked and Oaked, a 12-percent ABV beer in a classic Epic bomber bottle. While their most recent collaboration with Kiitos’ Coconut Stout runs scarce in inventory, an anticipated collaboration with Red Rock is currently in the process. Fowler deems this Boilermaker Series addition “one of the most flavorful bourbons” he has ever tasted.

Like most casual drinkers, I have my go-to drinks and liquors, all while knowing the bare minimum on how any of it actually comes to fruition. Speaking with Fowler is a mind-opening experience to the fact that Sugar House Distillery makes all of their product from “grain to glass,” which takes form in all their products from a scratch-recipe, $19.95 vodka to the experimental Boilermaker Series. Fowler credits locally sourced ingredients that help set the tones of his award-winning bourbon.

“There are so many talented people in this valley that it really seems like anything is possible, at least to try.”

“We get our corn and most of our grains out of Delta,” he says. “We get some rye and malted barley out of Idaho Falls, red wheat out of Tremonton and most of our malted barley from Utah and Idaho Falls. We depend on all of our ingredients so quality in locally sourced is important for us.” Quality ingredients, small-barrel batches and in-house distilling are all factors that underscore Fowler and Sugar House Distillery’s mission statement: “Small-batch spirits distilled and handcrafted in the Mountain West.”

For the next installment of the Boilermaker Series, Sugar House Distillery will use Red Rock’s annual Furlong series of brews. An imperial stout (following suit with some of the other collaborations from the past), the Furlong is something Red Rock usually delivers around the colder months of the year in an annual, holiday fashion. While the beer itself has been brewed in bourbon barrels in the past, the two make a nice combo. Fowler says, “[The nose has] orange, lemon and bright citrus with a touch of dark chocolate. [It tastes like] rich roasted dark coffee—nice buttery toffee, with a golden-raisin flavor. The finish on this Boilermaker has a nice caramel.”

This Boilermaker has no set date at this point, yet Fowler is excited to release it and keep the tradition going with more Boilermaker Series to come. Regarding other collaborations, Fowler brings up Mountain West Cider, hoping that they’ll be an upcoming partnership for the alchemy of Sugar House Distillery. Overall, Fowler’s no-holds-barred attitude toward creativity shows—he says, “I’d like to just start mixing beer in with some of our malts and whiskeys and see what comes out of it. There are so many talented people in this valley that it really seems like anything is possible, at least to try.”

“We want to show people that it’s easy to make a good drink with our spirits.”

With local ingredients and local community being such a strong value for a prosperous local business, Fowler shares stories of some fun events, including dinner at Avenues Proper’s Summer Patio Dining Series this past August and SLUG Mag’s Boo!stillery, where they’ll again be this coming Oct. 18 at The Union Event Center. “At the [Summer Patio Dining Series], we put four glasses of whiskey and modified each one slightly. One was straight, one slightly agitated by being stirred about, one with a large ice cube and one with just a bit of water. You really end up tasting four different types of whiskey just by doing that,” says Fowler in a testament to the complexity of Sugar House Distillery’s craft product.

Fowler even offers a mix I had never heard of to complement his bourbon. “My next favorite to straight is to 50/50 with Kombucha,” he says. “I love Mamachari’s [kombucha], and we do that sometimes at events like the Brewstillery and specifically SLUG Mag’s Boo!stillery on Oct. 18, which has been a great way to get people to see what real breweries and distilleries there are in this valley and beyond. We want to show people that it’s easy to make a good drink with our spirits.”

As I went down the line of vodka, rum, gin, malt whisky, rye whiskey and a couple forms of bourbon, I was impressed by both the quality and drinkability of each as paradigms of small-batch-quality product. Sugar House Distillery’s passion for the craft and willingness to try new recipes incorporating local products and business is what makes them stand out. Keep a look out for the Boilermaker Series coming soon with Red Rock, find them in supporting bars and restaurants in the Salt Lake area and at Boo!stillery, and definitely stop by for a tour at the distillery.