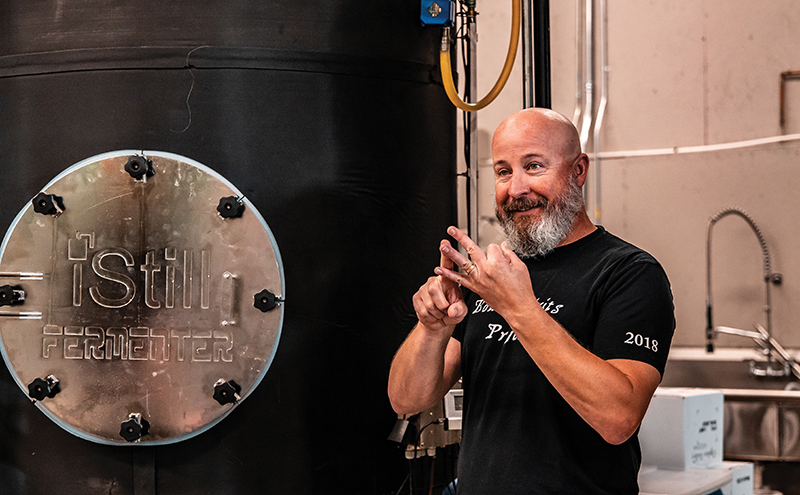 By Pineview Reservoir and nestled in the mountains of Eden, Utah, sits a humble and welcoming distillery whose work is not only innovating local distilling but also converting a curious public into a congregation of spirit connoisseurs through their distillery tour. What sets New World Distillery apart is that most distillers use a one-purpose still, not allowing for much tweaking or control. Using power and reflux, Chris and Ashley Cross are able to have different still shapes giving them the advantage of creating unique spirits.

New World Distillery isn’t only whipping up creative and inventive takes on industry classics, but with bleeding-edge tech, they are able to experiment with their Uncharted Series and other spirits. You can expect to see their Apple Eau de Vie around this Thanksgiving and their Apple Brandy to be released this spring. The real highlight, though, will be the bottle of their unnamed bourbon that (at the time of this interview) is expected to be released around Christmas.

New World is working with unique tech to elevate their distillery and allow them more flexibility in the distillation process. The use of tech, in this case the iStill, results in a product that can stand on merit alone. Of the iStill, Chris says, “Ultimately, it is a fractioning column under the control of a computer. It is insulated for efficiency. It is programmable. It allows us to precisely control vapor speed and reflux.  It mashes, ferments and distills on the grain.  [It offers] game-changing precision and flexibility.” This allows them to capture precisely the flavors and aromas they are targeting, from the fruitiness of their agave spirits to the earthy tones that go into their bourbon barrels. New World aims to make an above-top-shelf product, spirits that can stand on their own through their merits first and foremost.

“New World is working with unique tech to elevate their distillery and allow them more flexibility in the distillation process.”

At the New World Distillery tour, you get the true rundown of their lineup starting with their vodka, specifically Ogden Valley Vodka. Vodka is defined by how its distilled as it can be made with really anything (usually the cheapest material available—in the USA’s case, that would be corn), but during distillation, it must be collected at 95 percent. New World does a few things differently aside from the essentials. Theirs is an agave vodka, one of two in the world. This may seem odd, being that agave is not a domestic ingredient, but when you have a “Tequila Geek” like Head Distiller Chris, you can trust the process. What else makes this vodka unique is that it is not carbon-filtered, leaving the taste of the raw materials to open up the flavor of the vodka, as with agave giving it a sweeter taste.

The first of the Rabbit and Grass Agave Spirits is called the Blanco. “It’s a distant relative from a Mexican Blanco, as we do three different things,” Chris says. The Blanco is fermented using a champagne yeast that adds time to the fermentation process. This additionial time brings more to the flavor, as the longer fermentation allows the organics and the alcohol more contact. The Blanco is then distilled similarly to a brandy so that it can highlight more of the flavor from the agave. The Blanco is bottled at 44 percent (known as a golden number for flavor), before it drops off at lower percentages. Continuing down the line is the Rabbit and Grass Agave Spirit Reposado, which is fermented using a traditional yeast strain then distilled much like a whiskey. The Reposodo is then finished off by being aged in a used bourbon barrel to give it a harsher and bolder flavor than the Blanco.

“New World aims to make an above-top-shelf product, spirits that can stand on their own through their merits first and foremost.”

The Oomaw Gin, an award-winner and number-one seller, begins with its juniper taste followed up with a unique blend of eight other botanicals, which imparts a lingering floral taste, that lets the gin stand out even by itself. Much like the others, the gin is bottled at a near-golden 89 proof to give you maximum flavor, which is truly needed to experience the profile of the additional botanicals. Side note: Gin and essential oils are made basically the same way. “If you say you aren’t an essential-oil user but you are a gin drinker, well then guess what: You use essential oils,” says Chris. That being said, I think all those unwanted messages on Facebook from your high school classmates you haven’t talked to in ages may be more welcome if they were trying to recruit you to sell gin.

What’s happening up in Eden is special, as New World Distillery isn’t just creating spirits starting from a passion for knowledge but continues to make and educate in order to teach people on the differences and benefits of craft spirits. Chris finishes his tour with tips on how to read a label and how to tell who’s making the real deal as a craft distillery and who is just buying in bulk from the bigger brands. Be sure  that when you look, it says “distilled by and bottled by” on the label. Next time you are in Eden, check out New World Distillery—you will walk out of there feeling like you earned a degree in spirits, and if you can’t find them at your local liquor store, be sure to ask for them by name. In the meantime, make sure to stop by their booth at SLUG Mag’s Boo!stillery Friday, Oct. 18, at The Union Event Center.