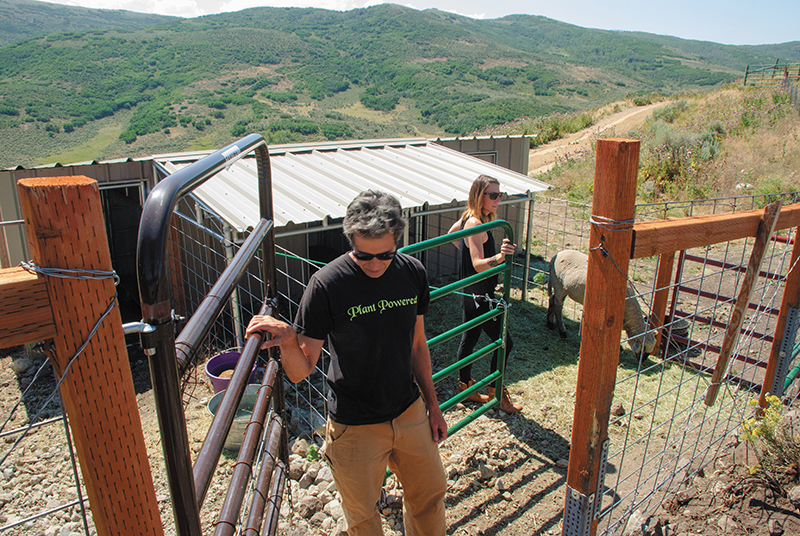 Sage Mountain is the result of a long time of planning by co-founders David Swartz and Lauren Lockey. What started out as an idea to start a horse sanctuary in Santa Barbara turned into a farm animal sanctuary just outside of Park City, Utah, where they not only have space for their three sheep and two pigs to thrive and for people to see them thrive, but where they plan out and execute a number of outreach programs and projects whose aims are to educate people about plant-based living. 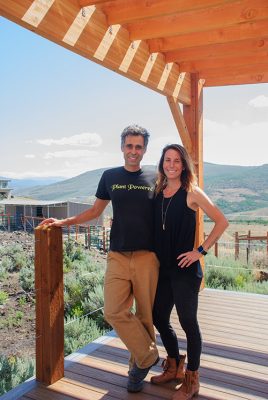 According to Swartz, the idea was hatched back in 2008, but the place to do it evaded them; Santa Barbara was out of their price range. One day on the way between Park City and Peoa, however, after searching property after property along I-15, Swartz and Lockey crossed the path of a large property for sale, bank-owned. Swartz notes that the property was incredibly inexpensive, seeing as it was the depressed year of 2009 and that the property was near a rock mine and extremely hard to access in the winter. Fast-forward to 2017, and after you’ve driven up and around the bends of Sage Mountain’s dirt road, their sturdily proportioned, modern home greets you at the top of the hill along with the pens and fences that are the animals’ homes. It is from here, surrounded by, yes, sage-covered mountains and hills, where Lockey and Swartz hatch their plans. Lockey describes the birth of Sage Mountain as such: “We decided that we could have … this small sanctuary coupled with outreach in the schools and the city,” he says. “From the beginning, we’ve been focused on [the question], ‘What’s the best way we can get people off eating animals?’”

Sage Mountain approaches answering this question by covering every base they can. “It’s a three-pronged approach,” says Swartz. “It’s not just the sanctuary. [Sage Mountain] is definitely just as focused on human health.” They and Plant Based Utah have started working with a hospital in Park City, which has access to physicians with a social authority that organizations alone don’t have. According to Swartz, these physicians agree that a plant-based diet is healthy, that it is in fact the best way to prevent heart disease, cancer, and Alzheimer’s. Of this clinical influence, Swartz remarks, “I think [it’s] so important because people still don’t know much about this lifestyle. There are still a lot of questions out there, like ‘Can I be healthy? Can I be active? Can I be fit? How do I do it? What am I going to cook?’”

One of the ways Sage Mountain attempts to assuage these concerns is with their event Thirsty First Thursdays. Different restaurants host this monthly event, and food is either donated or given at a discount. The August event included speaker Amy Meyer from the Utah Animal Rights Coalition as well as a former participant of a 10-day challenge who ended up sticking with veganism. Lockey says that these talks help the event participants to feel inspired and empowered.

Besides their social outreach, Sage Mountain is asking Park City government to come up with some kind of resolution regarding the consumption and use of animal products. “We’re pushing them to pass a resolution to recognize that this is a major cause of climate change and water useage,” says Swartz. “This is a city that prides itself on [climate awareness], has made a pledge to go 100-percent [renewable energy], and prides itself on saving resources—they push watering your lawn less to using less water in the house, even though that’s less than 5 percent of water use in Utah. We want to show them how changing one’s diet will have so much more impact than, say, taking a shorter shower.”

The local government is the only place Sage Mountain is “pushy,” though. Lockey preaches kindness and compassion when approaching people about plant-based lifestyles, because of how touchy things can get when people hear the word “vegan.” Their challenges are really more like tours of vegan living, guided by their colleague Kent Maurer, who takes participants to the grocery store and shows them how to shop vegan, or to restaurants so they can learn how to order vegan. Simple things that can be intimidating for the veg-curious are just as much Sage Mountain’s concern as are the big issues of climate change and water waste. After all, you can’t get people to make a big impact if they don’t know where to start.

Sage Mountain has been up and running for about a year, and it’s seeing many changes now and in the future. Not only will Lockey and Swartz start opening up volunteer days where people can come visit the animals while helping to feed and clean them, but they have just finished building a platform out next to the sanctuary for, of all things, yoga classes. Yes, you can do yoga with a 400-pound pig staring at you while you’re in downward dog. Swartz says that for some, the casual experience of simply existing next to an animal can get one thinking about veganism. So if you want to do some yoga poses with pigs, take the plunge and do a 10-day vegan challenge, or simply have questions about veganism, you should make the trek up the dirt road to Sage Mountain, or connect online at sagemtn.org and facebook.com/sagemountainutah.