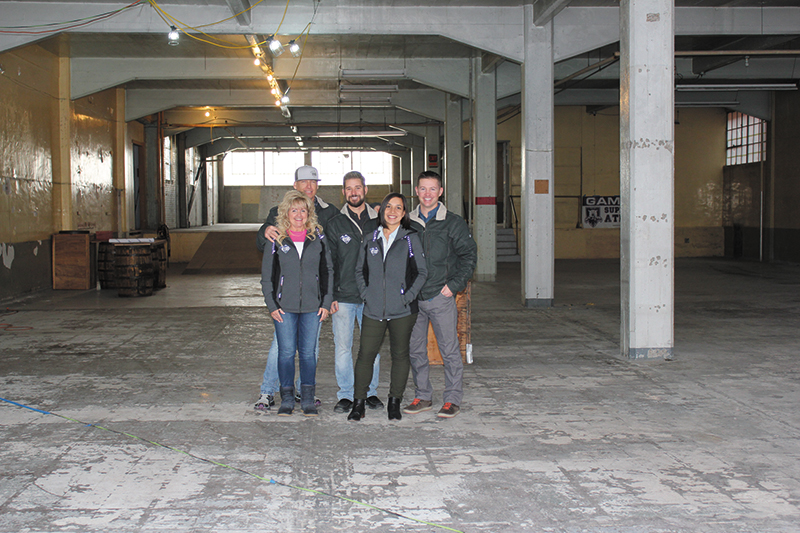 UTOG Brewing Co., one of Utah’s newest breweries-to-be in the heart of downtown Ogden, plans to open in July 2018. The historic Thorstensen building, now an empty shell, has huge potential that speaks for itself. This ideal location is in the neighborhood of world-class mountain biking, hiking, skiing and kayaking. Located on Grant Avenue, this estimated 9,000-square-foot brewery is poised to be a hotspot near all of the action.

Five key affiliates, Owner/Brewer Carson Foss and his wife Cassandra, Owner/Manager Jeff Manwaring and Owners/Managers Jack and Suzie Hubble greet us onsite. Each brings different business experiences to the table. They were united sporting official UTOG swag and were enthusiastic to show us around their vacant establishment. It’s no wonder they have been patient to ensure the startup of UTOG Brewing Co. here. To their advantage, attracting patrons will be easy. This spot offers a front-row view to the beautiful Wasatch Mountains or the backdrop of the Ogden Raptors baseball field—to enjoy the scenery or to catch a homerun ball from the best seats in the house. A huge, useful parking garage is across the street, and a central FrontRunner station is within walking distance. “We’ll have a banner on the building showing ‘Beer Here,’” Carson says. In the city’s plans is to enhance the surrounding, foot-traffic-only area by placing a bike lane directly in front of the brewery, “which lends to our master plan,” Jack says with a smile. UTOG Brewing will be the exact brainchild that the city needs for locals and visitors.

This proud community will undoubtedly welcome UTOG’s offerings of local handcrafted draft beers paired with appetizing bites. The menu will include traditional pub food like burgers, pizza and salads with a farm-to-table twist. “We want to use some unique ingredients and work with local farmers and cheese producers or coffee roasters to keep it local,” says Manwaring, who has history in hospitality and running restaurants. “Spent grain will go to a nearby farmer, and in exchange, we will get beef for the restaurant.” UTOG aims to be a brewery people can relate with, and Foss indicates that a key to their success will come from guests being able to put a face to the name.

Gearing up for his dream to be a brewer, Foss acquired a certificate from Portland State University for the business side of brewing and a high-end electric brewing system. Along with 10 years of homebrewing know-how, Foss was a commercial pilot captain for 11 years. This enabled him to easily visit breweries in the lower 48 states, and he plans to convey the best concepts out-of-state breweries have to offer. “I would find the local brewery in town and take mental notes of what I liked,” he says. “Now I’m pulling what I like and including our ideas, trying to put it into here, because we want more of that outside feel in Ogden. Right now, you have to drive to Salt Lake to get that vibe or culture.” When asked why they would start a brewery in town, Cassandra eagerly pipes in: “We need this!” she says, the group agreeing with her. “We want to get Ogden on the map—but also want to keep it a secret,” she says, laughing. Manwaring points out that in the past, Ogden lingered behind the curve for the burgeoning demand for craft brewing, and Foss adds that “there are 700,000 people north of Kaysville, and just one place you can have a beer that was brewed onsite,” he says. “That’s unheard of.”

“I have a fermenter that is identical to what we will use in the brewery—just one-15th the size,” Foss says. Though briskly dialing in his recipes, he is ensuring that the brewery will have high-quality products. When UTOG opens, four styles of beer will be available on draft: a pale ale, a wheat IPA, a session IPA and a porter. This brewmaster also has a blonde ale and a kölsch up his sleeve. “We will definitely have a gateway beer,” Foss says. Initially kegging only to serve the restaurant and brewery, UTOG will strategically place any extra kegs in nearby bars. As they determine their most popular beverage profiles, adding additional beers and tap handles will happen. Foss projects that “in the long term, we are shooting for probably eight to 10 on draft, and then our high-points in cans.” He is sitting on one of his best high-point recipes, a black rye IPA, with their future of canning in mind. This urban group probably won’t bottle in the future. Cans travel well, making it easier to enjoy the beer outdoors—or anywhere. They have a well-thought-out plan aimed to please their future customers.

Overall, it is easy to get excited right along with this team. We wish this place was open right now. Sharing the eagerness for the budding northern beer scene, the anticipation of summer beer trips to Ogden is upon us. “We want to be on the top of people’s go-to list when they are searching for what they are used to in Salt Lake or out of state,” says Foss. UTOG, if you build it, people will come.

For the latest information on UTOG Brewing Co., visit their Facebook page.