After the rockin’ success of The Copper Onion, it came as no surprise when chef/owner Ryan Lowder and his superb staff branched out and around the corner with another restaurant. Plum Alley serves Southeast-Asian Fusion based on the same locally sourced, seasonal, simple and homey (yet excellent) cooking ethics. The restaurant has experienced a little upheaval in personnel and menu shifting as they found their stride, but it’s only gotten better at each turn. 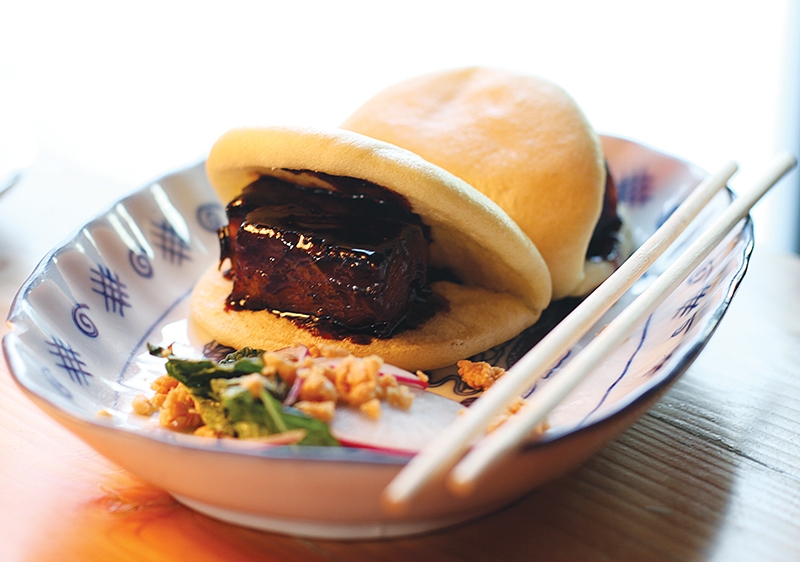 The Pork Belly Steamed Buns at Plum Alley are perfectly seared and quite literally melt on your tongue. Photo: Michael Schwartz

After the rockin’ success of The Copper Onion, it came as no surprise when chef/owner Ryan Lowder and his superb staff branched out and around the corner with another restaurant. Plum Alley serves Southeast-Asian Fusion based on the same locally sourced, seasonal, simple and homey (yet excellent) cooking ethics. The restaurant has experienced a little upheaval in personnel and menu shifting as they found their stride, but it’s only gotten better at each turn.

Named for Salt Lake City’s long-ago demolished Chinatown, Plum Alley offers a hip yet undeniably elegant setting for equally hip and elegant food. The entire joint oozes with that perfect urban combination of industrial-rustic design topped off with just the right amount of shine, color and light—exposed wood and wire mesh with colorful paper lanterns and mirrors that reflect the light from the long, south-facing windows along Broadway. There’s seating at the bar and at small, two-person tables along the windows, but large communal tables take up much of the restaurant. While eating with strangers is not the norm in Utah, it is, apparently, not so unusual on the East Coast, where Lowder worked for many years.

While the hours at Plum Alley can be tricky, with no lunch served on the weekends (which throws me about half the time, but I just end up at their sister restaurant instead), they are open for weekday lunches featuring some dinner favorites, as well as $10 lunch specials: a choice of side with an entrée or small plate, such as the stir-fried house noodles or chilled chicken rice bowl with yellow curry.

My favorite of these dishes is the Steamed Buns ($8 as a plate) with sweet, cincalok-glazed pork belly. The meat is perfectly seared, and the fat quite literally melts on your tongue. The steamed buns are a delicious, flat, round bread, and the dish is served up like two small Asian tacos, with a vinegar, mint, coriander, peanut and radish garnish that tops the buns perfectly. Paired with the griddled cauliflower, which is seared but still crunchy and topped with aioli, pickled mustard greens and toasted sesame seeds ($5 à la carte) or the spicy, caramelized, palm sugar–sweetened green beans ($6), it’s a perfect lunch.

For a heartier lunch or for dinner, don’t miss the P.A. Ramen ($13), a large portion of soup built around a pork stock that is cooked for 20 hours, with thick noodles, bits of pulled pork, egg and the most delicious pieces of pork belly I’ve ever encountered (and given how much pork belly I’ve had at Lowder’s restaurants, that’s saying something!). The stock is thick with flavor. If you don’t finish it, take it home and have it the next day—it’s far too good to waste. Vegetarians can also get an equally tasty version of the ramen with a roasted mushroom stock ($11).

The menu always includes a few specials that change over time—prices vary, but generally include a salad, a small plate and an entrée. During one visit, the specials included Manila clams in a coconut broth with bread, and a stew of house-made sausage and tofu. Ours came extra spicy, as we asked for, but they can keep the spice level down at request. I haven’t given in to my desire to lick my plate yet, but with these, it was a close call. Luckily, our server whisked the bowls away before I started gnawing on them.

While some people report unfavorably on the service, I’ve never had anything less than good service at both lunch and dinner—the entire staff is fantastic. They are attentive and witty, and they really know their stuff. Admittedly, I’ve been eating at both Plum Alley and The Copper Onion since their respective opening days, but the staff doesn’t always know me, so it’s not just me—they really are good.

Desserts typically include one or two house-made ice creams or sorbets ($1 at lunch, $2 at dinner for a larger portion) and the Five-Spice Donuts ($6), several large donut holes rolled in sugar and five-spice (cinnamon, clove and others) with a side of truly amazing coconut jam. Ice cream flavors vary, but I had both a sweet and exotic Coconut Honey, and an almost dry Dark Chocolate Pistachio that I am still dreaming about.

If you don’t have time for dinner, Plum Alley is still perfect for a drink before you catch a film at the Broadway Theater. The Sloe Gin Fizzle ($8) is a fruity one-two punch that is an excellent choice with a spicy dinner. The Cinnamon Pinch ($8) has to be tried to be understood: Gin, orange juice and cinnamon with a hint of basil; it is a dryer cocktail that is very sophisticated and unexpected. My personal favorite cocktail is the exotic Thai Tiger ($8) with its coconut water, citrus and red chili simple syrup—it reminds me of Froot Loops, but far more alluring! They also offer an excellent selection of whiskey and, of course, wines. For the non-drinkers (or lunch!), try a Fentiman’s Rose Lemonade or Cherrytree Cola ($4).

Plum Alley will be closed for a few days in the spring for remodeling, and it will reopen with a club license, which will allow later hours and an even more impressive bar. Expect the hours to change, but don’t expect the excellent food and drinks to go away—this flower of a restaurant is only going to keep improving.