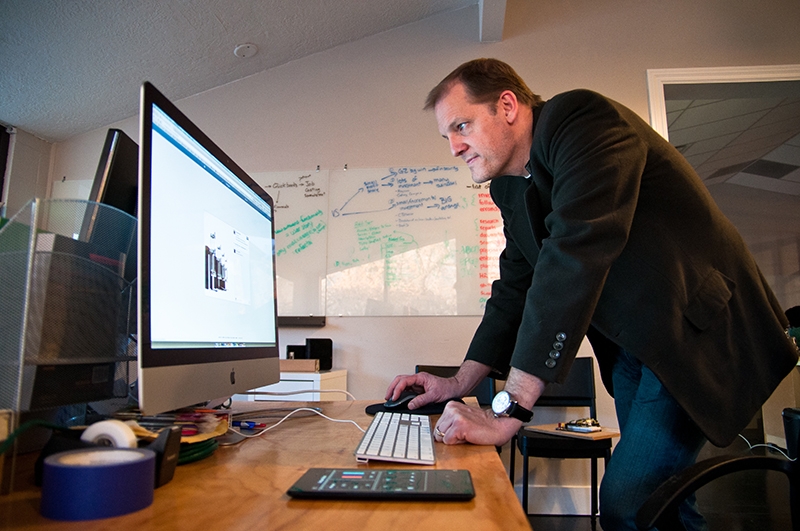 Guy Harding: The Brains Behind The Brew

If you’ve been to Nobrow Coffee Werks or Publik Coffee Roasters, you may have noticed their dutiful baristas brewing your coffee with a machine that looks like it was pilfered from the lab of a mad scientist. Have no fear, citizens—you are merely gazing upon what could very well be the future of coffee brewing as we know it. It’s called the Alpha Dominche Steampunk, and along with its futuristic design, it’s outfitted with a Google Nexus 7 tablet, whose purpose is to house the machine’s heart and soul— the AD Mincher app. The Mincher, so named as a diminutive of Alpha Dominche, was designed by Verisage, which is a custom software development shop based out of Provo. The app is designed to give baristas using the Steampunk the ability to control their coffee brewing to a near-fanatical degree. Not only does it allow for specific instructions regarding water temperature, agitation and steeping, but it also connects the owner to a cloud server to which they can upload their own recipes and access those of other coffee shops around the nation. “It’s cool from the barista’s point of view,” says Verisage founder Guy Harding, “because it remembers each recipe, which streamlines the ordering process so they can pay more attention to the customers.”

Harding and Verisage got involved with Alpha Dominche during the latter’s search for a streamlined user interface for their Steampunk machines. “They had a custom-built controller that didn’t have the network capabilities that they wanted, and it was expensive to maintain. They also wanted something that looked better and matched the design of the machine itself,” Harding says. The Mincher does exactly that. Its interface captures the sleek, minimalist design of a Kubrickian science fiction film, and its ability to remember several specific recipe components and preparations makes it extremely user-friendly. “We definitely wanted the app to match how cool the Steampunk is,” Harding says “It was really fun to work on.” The four crucibles of the Steampunk can also be regulated individually through the app, allowing the user to brew four completely different coffee coffees with the same level of consistency.

Because of its ability to store recipes and settings, the Mincher app and the Steampunk itself are quite approachable for the newly minted barista. “When we install a machine, we train the baristas how to use it. After that, it’s really straightforward,” Harding says. This makes the brewing and serving process more efficient for baristas and customers, and it ensures that each employee at a given coffee shop is on the same page. Since the app is exclusive to coffee shops who are using the Steampunk, baristas can rest assured that their content is getting updated by professionals—not just anyone has access to the Mincher.

It would be easy to dismiss this integration of technology and coffee brewing as some kind of gimmick if the Mincher didn’t produce a damn fine cup of coffee. Earlier this year, the Alpha Dominche was pitted against renowned manual brewer and barista Nick Cho in a competition to see whether or not a machine could craft a better brew than a human. Though it was only by a one-point margin, the Steampunk managed to come out on top. Thanks to the app’s ability to remember the exact settings of each particular brew, it offers its users the ability to craft four consistently flavorful cups of coffee at a time.

Regardless of its streamlined interface and overall functionality, the true innovation of the Mincher app is its ability to collaborate with other coffee roasters around the country. As more coffee shops start using the machine, the app will allow them to connect with each other in order to swap recipes and tips for achieving a certain coffee bean’s optimal preparation. While the immediate result of such collaboration is an increasingly perfect cup of joe, the potential applications for this type of technology in other culinary areas are exciting.