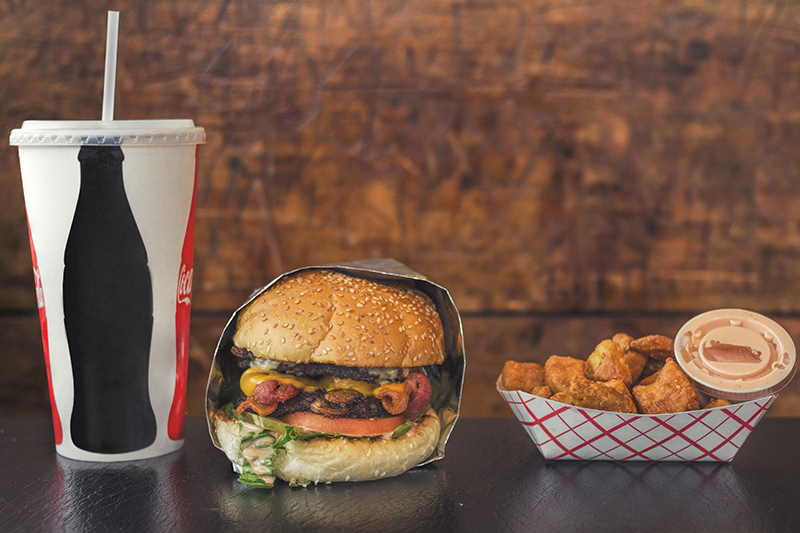 When a young Van Turner opened his hamburger restaurant on Salt Lake’s West side, I doubt that he thought he’d still be at it 44 years later. Yet, there he remains—a mainstay of his Glendale neighborhood. And it really is his neighborhood. The former city councilman has spent most of his life running Hook & Ladder Co. and the adjacent Firehouse Floral and Gifts. The neighborhood has changed, but the restaurant has stayed consistent. As it has weathered the decades on California Avenue, the number of options on the menu may have grown, but the old-fashioned flavor and hometown feel of the place keeps its steady base of customers coming back for more.

I’ve always thought of Hook & Ladder as a hamburger restaurant. This is mostly true. Variations of the traditional homestyle burger make up a fair number of the 21 different combo meals on the front side of their current menu. Options for burger toppings include cheese, freshly sautéed mushrooms, bacon and jalapeños. A single, no-frills burger starts at $1.10 and goes up in price as the size of the patty and the choice of toppings increase. More Utah-centric items like Pastrami burgers and Granny burgers (topped with ham) are available as well for $3.99 à la carte or as part of a combo for $6.59. One of my favorite combo meals is #9 ($6.59), a big bacon burger that comes with fries and a large soda. In my experience, the burger is always served up hot and perfectly cooked, nestled carefully on the slightly oversized bun. For this review, I wanted to sample more of the menu. My first foray into other combos started with one of their more notorious options: the Shaun Special.

The Shaun Special ($9.99) is legendary because of its size. It was recommended when I asked the server for her suggestion—and it sounded great: a half-pound cheeseburger with sautéed mushrooms and bacon, paired with an order of English chips and a jumbo drink. I had my reservations, though. Mushrooms at fast-food places can be an issue for me—there are few things that I hate more than rubbery mushrooms from a can. I was happy to learn that the restaurant used fresh mushrooms in the kitchen—and what an addition they made. The cheeseburger was huge, and the mushrooms and bacon added a salty earthiness to it that really took it to a higher level than standard fast-food fare. The kicker, though, was that the burger came with a basket of English chips—battered and fried potato chunks that Hook & Ladder gets from a local distributor. Their normal fries are certainly more than adequate, but these creamy chips, especially when paired with their homemade fry sauce, are melt-in-your-mouth incredible. They were a completely unexpected treat. The only downside of this choice is ending up completely full long before you’re finished eating. If you still want to try it but it seems like too much food—and I honestly had a tough time finishing it all—a standard mushroom- and bacon-topped burger can be had as part of Combo #2 for a mere $6.89.

The inspiration for my next foray into the menu came from me hitting up the restaurant during the lunch rush. As I labored over the idea of which burger I would get, I noticed that everyone in line before me had asked for Fish and Chips. I did the same. The Fish and Chips combo ($7.29) comes with three battered and fried boneless cod fillets, a small order of french fries, a buttered and grilled dinner roll and a large drink. Had I thought about it, I would have probably paid extra and had the English chips swapped in for the fries, but I was still happy with what I got. The golden fish pieces were flaky on the inside and crisp on the outside, and the fries and tartar sauce cut their richness considerably. The dinner roll was a nice touch and made the combo feel more like a meal. If you like the Fish and Chips combo but want a little more food, they also offer a Seafood Special that includes everything you get in the first combo with the addition of 10 fried shrimp. It’s only $1.50 more and could easily feed two people.

I’ve really enjoyed my visits to Hook & Ladder, and I take comfort in knowing that they offer so many things that I haven’t tried yet. This will keep me coming back for more. One day, I’ll get around to sampling both their crispy and grilled chicken sandwiches, their tacos, fried pickles and impressive selection of shakes and other desserts. As one who lives and works on the West Side, I am constantly bombarded with strip mall casual dining and myriad fast-food, chain-restaurant options—and I’m always disappointed when I fall prey to them. It was good for me to be reminded that there are other options—better options. Hometown, humble burger joints that offer up “old fashioned taste with a fast pace.”