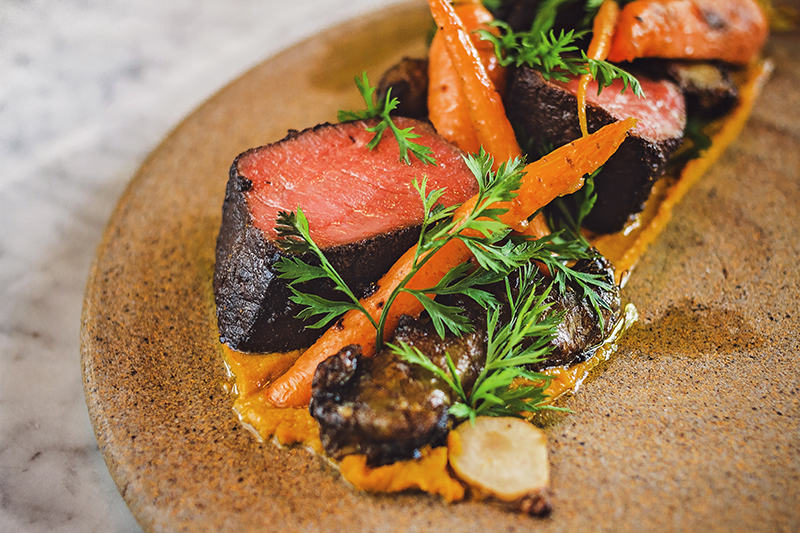 Pallet: Spooning Up Something New

Currently rated No. 28 out of 1,205 restaurants in Salt Lake City on TripAdvisor, Pallet is extremely underrated when it comes to its online popularity. This cozy restaurant is filled with ambience, including a retro typewriter begging for an inspired message from your fingertips. Its homegrown feel is embraced by Edison light bulbs and reclaimed wood decor that transports customers to a nostalgic daydream of what visiting the dining table of your grandparents’ farm may be like as your adult self. Pallet is cozy, conversational and a food critic’s dream.

Starting with the Farmer’s Salad ($8), I was mesmerized by farm-fresh vegetables and greens, complemented by a basil buttermilk salad dressing that appeared and tasted more like a salad rub than a creamy dressing. It was divine, and officially on the top of current “must-have” salads across the country. I was sucked in from the beginning—and then I had Gloria’s Meatballs ($11). I wanted to find something wrong with the the red sauce soup that accompanied the meat and parmesan deliciousness, but I couldn’t. In the interest of not letting anything go to waste, we ordered some bread to help soak up the leftover sauce, a perfect combination of sweet and spicy.

I was tempted to order the Pig Latin cocktail ($65), which comprises Whistle Pig 15-year Rye Whiskey, Grahams 20-year port, Amaro Nonino and Abotts Bitters—however, my mood was enticed by a Spanish red wine, 2014 El Chaparral DeVega Sindoa, while my husband, Scott, enjoyed their take on an Old Fashioned, River Boat Joe ($13), keeping in line with the restaurant’s early-1900s vibe. Pallet’s bar reminds me of the Buckhorn Bar & Parlor in Laramie, Wyoming (established in 1900), due to its wood-framed mirror and small-town feel that could easily be the set of a Wild Wild West bar action scene. The cocktails are visionary and full of surprise in regard to ingredient pairings and liquor choice. Bar Manager Bijan Ghai uniquely named each one. For instance, Shore Enough ($16) pays homage to Chile with its Pisco base, taking deeper roots with lime, spiced pineapple shrub, grapefruit bitters, orange curacao, turmeric and guava.

I sensed that chicken was not going to cut it for my meal, so I jumped right in for the Elk ($32). Executive Chef Zachary “Buzz” Wiley knew what he was doing when he adorned the dish with carrot-stem leaves atop a combination of sunchokes (a root vegetable), black olives, baby heirloom carrots and perfectly cooked elk meat. This was an extraordinary dish full of flavor and tenderness, something I would go back for. The sultry allure of the big game meat was a perfect match for the savory taste of the vegetables, which provided a sense of artichoke and potato flavor with a slight bitterness from the leafy carrot top. The elk was not gamey and served in the perfect portion.

Lucky for me, I was able to taste Scott’s order of Lamb Ribs ($27), which were equally delicious. The New Zealand lamb is put through a steaming process to remove the fat, flavored with Moroccan spice, and served with couscous, cauliflower and radish, and topped with edible flowers. The flavor packs a little punch, carrying hints of turmeric, garlic, cumin, cinnamon, paprika, nutmeg and ginger. It’s something I would highly recommend.

Pallet is a unique space. With attention to detail and communal tables offering a sort of casual, Great Gatsby gathering vibe, it is refreshing in its style and culinary tastes.  With artwork commissioned to resemble true 1900s portraits and an exploration of farm-to-table creations beyond the imagination, the space is suitable for a date, a party, or company gathering. Only open for dinner, the restaurant allures with options for early-evening craft cocktails or after-dinner nightcaps.

We finished our meal with dessert, of course. What kind of food critic would I be if I did not dive into Comments from the Peanut Gallery ($9)? It’s a beautiful smoked chocolate ice cream with graham cracker, peanut nougat and edible flowers expressing hints of a s’more campfire minus the marshmallow. I posted a photo of this dessert on my Instagram feed, and comments came in from several friends about how much they all loved Pallet, including a fellow traveler and tour guide who named it “Best Eats in Salt Lake City.”

What’s the good word? Find the wall of wisdom above the typewriter on the way to the restroom. You may recall memories of your grandparents’ home one more time by rubbing your finger prints on the keys or with the Borax soap. No attention to detail is spared at this fine Downtown dining establishment.