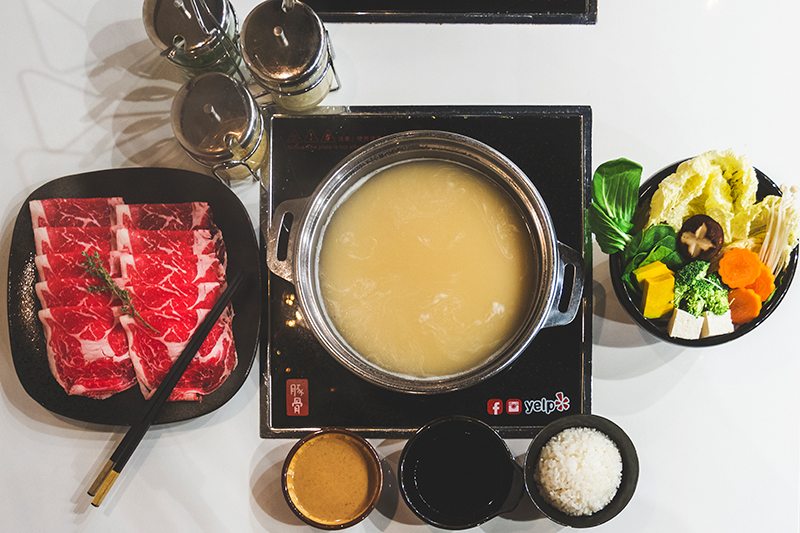 In recent years, Utah’s need for cold-weather comfort food has made many privy to Japan’s hot foods as the ramen craze took over. But there’s more! Enter restaurant Tonkotsu Shabu Shabu. Tonkotsu opened its doors a year ago, offering not one but two restaurant concepts under one roof. The south side of the building, Tonkotsu Ramen Bar, dishes out its hot soups, rice plates and traditional appetizers like gyoza, takoyaki (octopus balls) and pork ribs, to name a few. They were between hours when I visited; however, the menu reads as if it would be a perfect place to grab a bite either in a hurry or with some time to kill. Directly next door to the north is Tonkotsu Shabu Shabu, where dedicating time is necessary to extract the essence of shabu-shabu in all its glory—we recommend planning for one to two hours there. I went for dinner, but lunchtime diners get 10 percent off the entrée and add-on prices listed here.

We begin by entering the long, dimly lit corridor adorned with modern light fixtures and minimalist black-and-white line art on the walls. A row of large, welcoming booths is on the left side of the restaurant, in direct view of bar seating to the right where all can be seen in the open-faced kitchen. The fact that the owners keep no secrets becomes obvious as the knowledgeable waitstaff seats you and is eager to explain the menu and why each guest has an electric stove embedded into the table where they are sitting. As Tonkotsu awaits their requested alcohol license, we happily make do with an array of Japanese soft drinks, teas and Coke products.

At first glance, the menu seems as minimalist as the restaurant, yet the complexities of flavor to come hide themselves in the shadows extremely well. The guest is tasked with picking a broth. These are classically produced stocks, which make for the foundation of any good soup. For this visit, we pair the Tonkotsu broth with USDA Prime Ribeye ($21.50 regular, $25.50 large), Miso with USDA Choice Ribeye ($17.50 regular, $21 large) and Kabocha (a vegetarian Japanese-pumpkin broth) with lamb ($16.50 regular, $20 large). It’s important to note that meat is not a requirement, and all dishes come with a raw veggie bowl of bok choy, broccoli, carrots, enoki and shiitake mushrooms, kabocha pumpkin, napa cabbage, spinach, tofu and udon noodles. The Veggie Bowl itself is $11.

As all of the broths are basic in their very essence, it is the duty of the guest to shape their own soup by slowly adding in the ingredients to cook and moving them to a separate bowl to eat. Working with many leafy greens and thin cuts of meat, everything cooks relatively fast, leaving it to the guest not to overcook anything. While the sweet earthiness of the goma is meant for vegetables, cheating and dunking a medium rare strip of steak is a treat. The sweetness and saltiness of the ponzu also offers a similar duality, while imparting another layer to the flavors in play. This is also a good time to be testing the broth, adding and tweaking ingredients at will. The amazing part of this task is that the guest is constantly playing a game of senses with themselves as the broths develop their own individual characters. Adding house-made chili sauce, garlic, radish and green onion only enhances this effect, and by the time the guest is close to finishing, the cooking soup has evaporated and reduced itself into a complexity of flavors. There is almost no way to describe how these dishes will taste at the end because they have been shaped by their creator throughout the entire process. Regardless, they are guaranteed to come out delicious every time.

The minimalistic approach to having a single appetizer, garlic butter edamame ($5), one dessert item of mochi waffles ($6) and a vast selection of exotic ice creams now makes sense due to the huge entrée that satisfies the appetite. That being said, make sure that there is room left over because the crispy, chewy sensation of a rice-flour mochi waffle paired with ginger ice cream and caramel is highly recommended. It’s safe to say that anyone looking for one of Salt Lake’s most memorable dining experiences will not be leaving disappointed after experiencing Tonkotsu Shabu Shabu Bar.