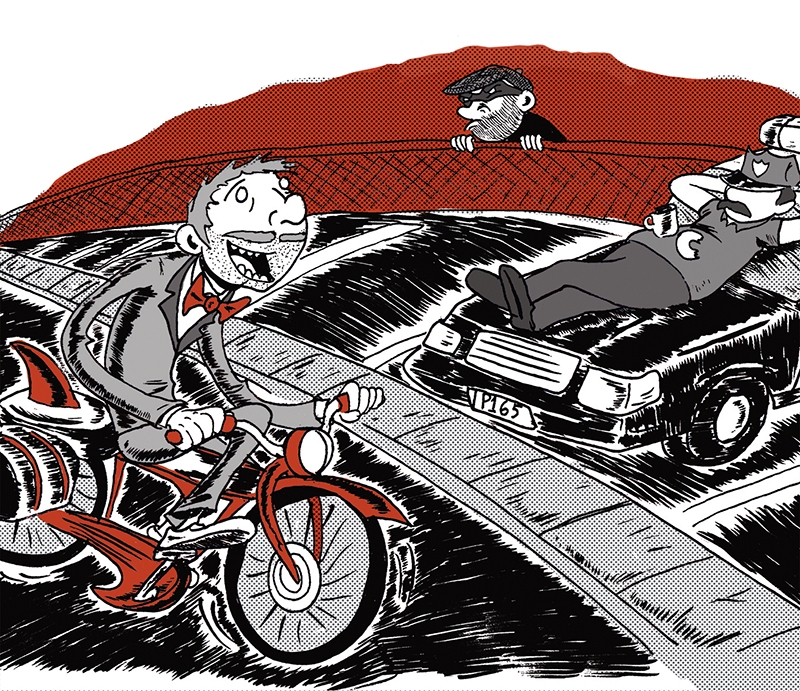 Me and my bike are much like P.W. Herman—before he ever masturbated in public—and his special two-wheeler, in that we have both been on many adventures together. Both of our bikes have been stolen and retrieved with little aid from proper authorities, as clearly evidenced in the famous ’80s documentary, Pee-Wee’s Big Adventure. My tale of thievery is a bit different, but there are several parallels.
Pee-Wee was inside his favorite joke shop when his bike got stolen, lackadaisically shopping under the false security of a 100-foot chain and lock. I was inside one of my favorite taverns, my bike under the false security of the hipster safeguard device known as the U-lock, and I was under the false security of several Jim Beams and Budweisers. Too intoxicated to pedal safely, I ended up in a cab, and my bike ended up sleeping over, locked next to the tavern expecting me to retrieve him the next day.
The next day, I was too hungover for many activities—one being retrieving my bike. I could barely feed my cat, Jet Pack, without dry heaving, so alas, I left my two-wheeled chariot locked up to the tavern to brave another night alone. This was my mistake. I received a call from the tavern owner the next day. He asked me, “Was that your bike that was locked up in front of the bar?” I replied with, “Was?”
I legally obtained my bike at a local bicycle emporium—my receipt and serial number were of good standing within the law. So, I did what anyone is supposed to do when an item of value is stolen: Alert the local authorities and receive a bullshit case number.
I understand that there are larger, more looming problems in the local community other than my stolen bike. Regardless, I quickly learned, without any surprise, that the cops give about as many fucks about stolen bikes and their peddlers as prescription-drug-addled Mormon mini-van driving moms ignoring all bike lanes do: zero. Three months went by, and I was pedaling a shitty Centurion 10-speed I picked up for $50 at the local Bike Collective. I parked my beater bike at a designated locking location for such vehicles and something caught my eye—black handlebars, identical to the ones I used to firmly grip with such fervor, a bike seat identical to the one that used to cup my genitals with such rapture. Oh, and the tires were the same as my stolen bike, too.
In a cheap ruse, the petty bike thief had adorned my frame with many shitty stickers in the hopes that neither I nor the authorities would notice that the bike was stolen. But the best part? My original hipster safeguard was still dangling from the frame, cut marks and all. Apparently, the thief couldn’t get the lock off and disassembled the rack it was locked to in order to steal my bike. I also still had the key—on me, in fact—to said U-lock.
Not caring if my $50 Centurion got stolen, I took my other lock and locked it to my precious that had been separated from me for three months, finally brought back together by fate. Then I called the cops. In typical cop fashion, they took their sweet-ass time for my non-emergency dispatch request. As I was waiting for the cops, I watched the thief walk up to my bike, remove his lock, and mutter, “What the heck?! Who would lock my bike up with another lock to this rack?!”
I used every ounce of composure I had (which isn’t much) to not stand up and punch him out, knowing that I had already called the cops. I called dispatch back and let the operator know that if they didn’t send a badge over on the double, they would be hauling two people to jail—the bike thief and me, for assault.
When the cops finally got there, I explained how I locked up my bike with my current lock so the thief wouldn’t get away. Then I told him I could prove the bike was mine—besides having the serial number—by popping the dangling U-lock from the frame with the key I kept. As I sprang the damaged U-lock from the frame, the cop let out a boisterous laugh and said, “Wow! That’s amazing! No one ever gets their bike back!”
Ultimately, they didn’t arrest the man riding my bike. The lazy cops said they didn’t have any evidence proving that this man had actually stolen my bike. The man admitted to buying my bike at the homeless shelter for $25. That’s right, my $900 road bike is only worth $25 on the local Salt Lake crack market. I’m just guessing here, but isn’t that, like, only three crack rocks?
The moral of the story is, if your bike ever does get stolen, don’t call the cops. As Pee-Wee and I found out the hard way, it’s a complete waste of time. Instead, go on an adventure and check the basement of the Alamo, or if you are in Salt Lake, the public library. If that doesn’t pan out, your bike will for sure be somewhere inside Hollywood Studios, as in Pee-Wee’s case, or two blocks away from the homeless shelter, as with my case.