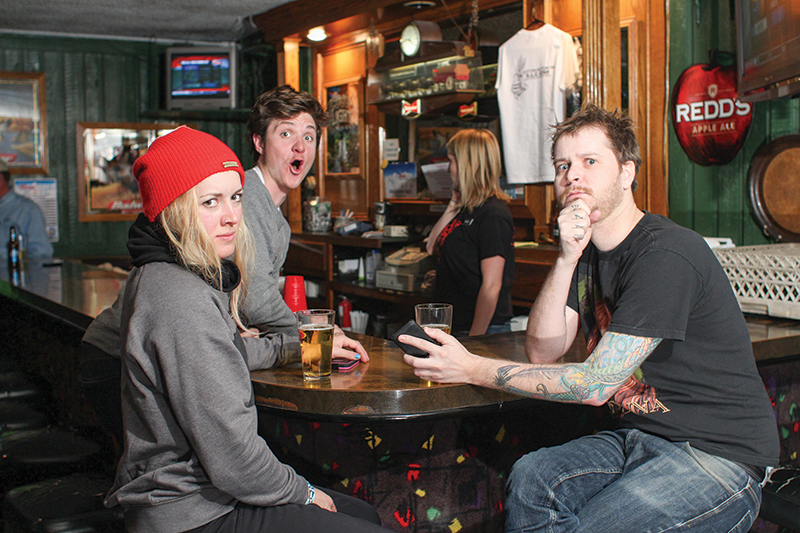 Olympian Faye Gulini and boyfriend Lil Jeff sit down with Mike Brown for a heart-to-heart at the Cotton Bottom.
Photo: John Barkiple

I’ve been on a real interview kick lately. First a pro runway model, then a pro soccer player and now a pro snowboarder. Growing up in the Salt Lake shred scene, running into a pro shred head really isn’t a big deal. I’ve shared beers and blunts with several of them over the years, but they shall remain nameless due to the industry’s tendency toward drug testing these days. I’ve never had the chance to share a beer with a pro who got a taste of the Olympics, until Faye Gulini was kind enough to split a pitcher with me and her BF, Lil Jeff.

Originally, I wanted to interview a gold medalist for this article. But, after numerous failed attempts to contact one of the local rippers who brought home some hardware, and with my looming SLUG deadline, I opted for a better plan: interview someone who got 4th place and ask them questions that a gold medalist probably wouldn’t be able to answer due to ruining contractual obligations between them and their sponsors in regard to obscenity.

MB: I didn’t watch any of the Olympics this year, but I went to the halfpipe contest when it was here in 2002.
Faye: Hey, I went to the halfpipe, too! I was also in the opening ceremony—remember the Children of Light?
MB: Is that what sparked your Olympic dream?
Faye: Uh, yeah, sure.
MB: So, you competed in the boarder cross. Where do you train for that?
Faye: Kind of wherever—they don’t really build courses. So, we really don’t train unless we are at the event.

MB: What’s it like being a better snowboarder than your boyfriend? Does it affect the relationship?
Faye: It’s nice. It affects the relationship a lot.
Lil Jeff: I’m super competitive, so it gets weird.

MB: Were you and all the other snowboarders making fun of Shaun White for pussing out of slope style?
Faye: It’s a bummer that someone else couldn’t compete in his spot.
MB: I just feel that anytime there’s an opportunity to make fun of Shaun White, a person should take it. Was the course really a bit dangerous like he said?
Faye: Yeah, a lot of people take [the opportunity]. Nope, but we got there after he had pulled out. It sucks for Shaun because people are bummed on him, but it also sucks that someone else could have gone and didn’t get the chance.
MB: Well, at first I didn’t really blame Shaun for pulling out. (Insert Shaun White pullout joke here).
Faye: Yeah, I don’t know a ton about the slope style course, but everyone else seemed to manage just fine.
MB: Except for that Russian skier who got paralyzed. How was the boarder cross course? Any problems with it?
Faye: Nope, it was great.

MB: I’m super curious about the drug testing process. It seemed like such a huge deal with snowboarding when the Olympics were in Salt Lake.
Faye: It was pretty casual. But at the end of your competition, they’ll take you in a separate room with each team. So, Team USA will also have a chaperone and one person from the doping agency will be there, too. Then you do all the measuring yourself, because if anyone else touches it, someone can claim that they tampered with your drug test … So I guess it’s kind of strict, but you basically just pee in a cup and give it to someone. The US Anti-Doping Agency can test you anytime, anywhere.

MB: Do they, though?
Faye: No. We get tested once or twice a year for the US team.

MB: Lil Jeff wants to know how you think you would have done in the Special Olympics.
Faye: I dunno. I probably would have gotten last.

MB: What is the dumbest question any reporter asked you during the whole Olympic process?
Faye: I dunno, yours?

While we were eating sandwiches and doing the interview at the Cotton Bottom, some of the patrons and workers overheard that Faye was in the Olympics and boy, were they excited. Joe Six-Packs seem to cream their pants over Olympic athletes. They came up and thanked her for representing our country, and she was cool enough to not even ask for a free tab. It was refreshing that, within the media blitz that is the Olympics, there are riders like Faye who treat competitions as a chance to ride with all their buddies instead of shooting themselves because they didn’t medal.