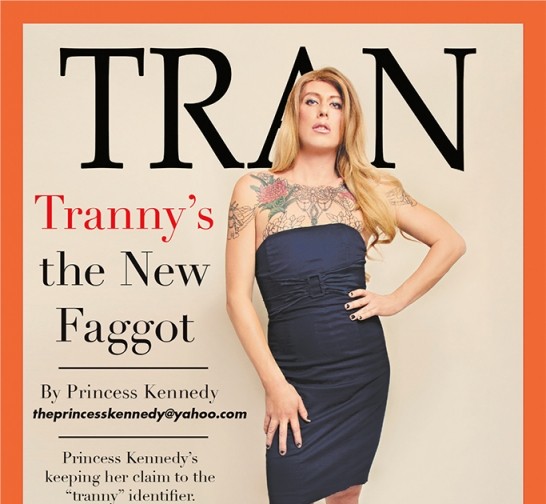 Photo: Talyn Sherer // Layout: Eleanor ScholzWhat’s in a name? I guess the answer lies with she who holds it. I think, as humans, we have the wherewithal to know what is acceptable to say and to whom, but the word police are at it again, and I couldn’t be more T-ed off! I’ve been getting a ton of calls from people as of late because of the controversy of the word “tranny” all over the Internet and the lack of specifics as to why it’s bad and the inconsistency of who can use it. This time, they’ve gone too far and made it personal. Let’s travel back a few months to how it all began.

An interview was released with a transgender woman, Carmen Carrera, who originally found her 15 minutes of fame on television’s fiercest reality competition, RuPaul’s Drag Race. At the time, she enlisted as a drag queen for obvious reasons, but shortly after the show ended, she started the process of transition and received another 15 with a fan-initiated online campaign, all hoping to gain herself access to modeling in the Victoria’s Secret Fashion Show. That would be amazing, but not likely to happen anytime soon. I think that Middle America—for whom this incredibly overproduced, devastatingly tired, televised softcore “fashion show “is produced—wouldn’t be able to think of anything else except her cock. She does have expensive-looking boobies—and the hair, hips and the “fuck me” duck-lip face. She still has a dick, though, and this fact sparked stupid remarks from ignorant people such as “fucking tranny.”
We all know that if I say, “fucking hippy” over just “hippy,” no matter how accurate or true the statement, I’ve suddenly just made “hippy” a bad word. Ms. Carrera stated in an interview, not too long ago in The Advocate, that “tranny” made her feel bad, and now the word police have been on it, claiming “tranny” to be the new slur. Carmen Carrera, stop being such a fucking media whore. You’re a tranny.
I get it, though. I’ve actually spent the past couple of months interviewing friends and reading numerous articles from the iconic tran-setters, and the conclusion seems to be one of unity. Let’s see if I can simplify with some detail so that, when you find yourself at a party and calling an overly made-up cisgendered girlfriend a “fucking tranny,” you will be prepared when you get attacked, verbally, by some fey word Nazi with a bit of knowledge.
If you know that someone is actually going through sexual reassignment, it’s probably a good idea not to call them a tranny, and in this case, definitely just use the appropriate pronoun relative to what the person obviously identifies as—DUH, common sense. “Tranny” is, however, a long-used umbrella term for everything trans*: transgendered, transidentified, transvestism, drag queen, gay best friend, Dolly Parton (the homeless lady with the sad, nappy wig—you get it). In the gay club setting, we call each other “tranny” as a term of endearment.
The politically correct law enforcement has changed it to a full-on expletive and transphobic slur, though, and that pisses me off. Why, you ask? Because they have taken the word that I use to identify myself and made it dirty. The gay powers-that-be have gone and made a whole sect of their own kind feel ashamed of who they are. Well, fuck them—you can call me “tranny” all you want. You can even call me a “fucking tranny,” as long as you are ready for the consequences of what I might say or do, depending on the context.
I definitely will not stop referring to myself or others as trannies. It’s a right that I’ve earned for myself, and I’m not waiting to reclaim it. I don’t say any of this to be trite or condescending—I say it because I have always said it, and never once did it feel wrong or mean. I’m one of the original Trannyshack Girls of San Francisco. My verbal repertoire is more fun with the option of calling redheads “Little Orphan Tranny,” and I don’t want to live in a world where I can’t replace lyrics with others, such as: “and now you’re just sometranny that I used to know …” (echo “sometranny”).
Transgender people are the last frontier of the LGBTQ movement. We not only make the straight community uncomfortable, but we find ourselves discriminated against within our own kind. I’ve actually wondered why we got grouped in with the gays in the first place, because if you ask many trans people who have gone through reassignment, they often don’t identify as gay. They usually hate being grouped with the drag queens, too—I myself am way more offended by being called a DQ than anything else.
I think that trans superstar Laverne Cox, from the hit series Orange is the New Black, sums up the trans* dialogue best in her recent cover article on the transgender revolution in the June 9, 2014 issue of TIME Magazine: “People need to be willing to let go of what they think they know about what it means to be a man and what it means to be a woman. Because that doesn’t necessarily mean anything inherently.” I chose to emulate her cover shot for TIME because it’s our time! It’s time to for you to make a change and get over your hang-ups about what is or isn’t between my legs, and to the political bullies: You don’t get to decide the identity that I claim.
Photos: