Feeding Back: Conversations with Alternative Guitarists from Proto-Punk to Post-Rock by David Todd, A Guru Is Born by Takeshi Kitano and more are reviewed! 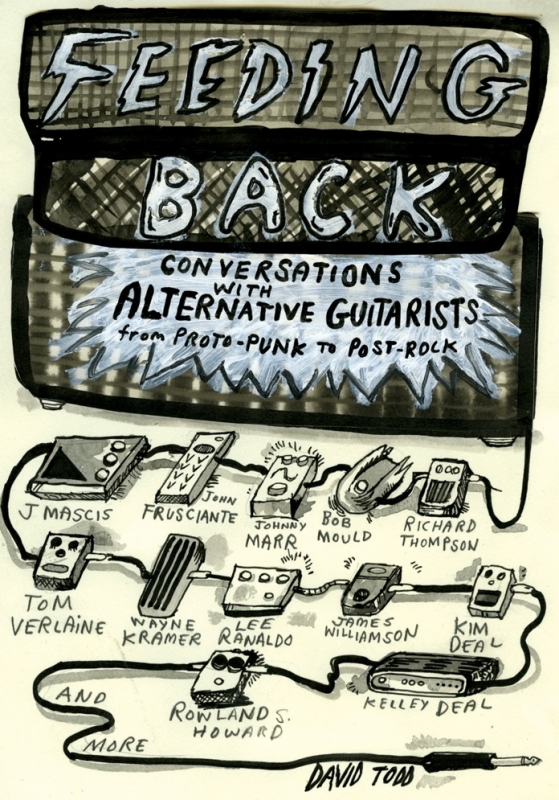 Feeding Back: Conversations with Alternative Guitarists from Proto-Punk to Post-Rock
David Todd
Chicago Review Press
Street: 06.01.12
Before the first page, Feeding Back faces an uphill battle. The tendency to canonize and idolize the Gods of Rock Guitar looms large. It has only recently been challenged in rock history, and these conversations reveal that the style of guitar discussed in this volume is largely built in conscious opposition to that canonization. Alongside the reverence for the holy trinity of Hendrix, Page and Beck, “alternative” too nearly reads “nonessential.” Todd seems to acknowledge this fundamental problem, but does so by underemphasizing the necessity of these conversations (From Proto-Punk to Post-Rock almost sounds like an in-joke–that’s a pretty miniscule slice of the musical universe) and assumes the reader knows as much about these obscure musicians as the author. I’d like to consider myself an assiduous student of music history, and I’m even a guitarist, but I’ve never heard of Richard Pinhas, for example. He also seems to pick pet favorites (Jason Pierce but no Kevin Shields?) in addition to more universally regarded guitarists.While Todd’s introductions are helpful, and his prose transcends typical rock-crit-ese, the significance of the conservations depends wholly on the reader’s interest in the guitarist. The Lee Ranaldo interview is great, but mostly because I really like Sonic Youth. The notable exceptions are Glenn Branca, who proves especially articulate about his style and process, and Kim Deal, who is just really charming. A more compelling book might have had Todd, in his distinctly strong voice, paraphrase these conversations in a series of essays that more fully describes these musicians’ place in the history of alternative rock. –Nate Housley

A Guru Is Born
Takeshi Kitano
Vertical
Street: 06.05.12
A Guru Is Born follows the fictional journey of Kazuo Takayama as he joins a religious sect and slowly and somewhat haphazardly works his way up to become the order’s guru. The book was originally published in Japanese back in 1990, and the biggest problem this translation has is that, in far too many places, it feels like a translation. Aside from that, the story is interesting on several levels. Kitano pulls back the curtain on organized religion, revealing the ease with which corruption takes place and questioning faith from every possible angle. This is definitely a conversation-sparking book, but, keep in mind, if you’re a devout follower from any corner of religion, this dark satire might not be for you. –Johnny Logan

Jimi Hendrix: A Brother’s Story
Leon Hendrix with Adam Mitchell
Thomas Dunne Books
Street: 05.08.12
I read it in a day and I could not stop tearing up. It’s clear that in this case the struggle is what created the epic artist, but the story of Jimi Hendrix and his brother Leon growing up in utter poverty- making do with practically nothing, supplemented occasionally by the kindness of others- is absolutely heartbreaking. Nevertheless, it truly was this same desperation that led Jimi to first plug his guitar into his Dad’s old-school radio and finagle with it until it functioned as an amplifier- and the distorted sound that emanated from inside led Jimi to his world-renowned signature sound. Revelations such as these are the stuff you can only get from the perspective of someone who really did experience it all with him. Starting with a story of a tragic childhood, so poor they would subsist at times on ketchup sandwiches, Leon describes a life full of constant upheaval, with alcoholic parents whose tumultuous relationship left a dramatic impact on their two sons. It fueled Jimi’s drive to express musically the emotions he otherwise kept strictly in check. When their mother died, it left a major mark on the brothers, and according to Leon, the tragedy led to some of Jimi’s most famous lyrics. There are joyful stories told between the disappointments, but perhaps most disappointing, even if predictable, is the dissolution of family that occurred after Jimi’s death. As is too common in these stories, when the time came to deal with the finances and business matters regarding Jimi’s estate, greed and selfishness dirtied the deal, and Leon was ousted by their father’s more recent wife and step-daughter- a family Jimi had hardly known. I truly enjoyed this story and fully recommend it. It’s full of joy and pain, life and death, money and deceit- all the good stuff. Give it a read and get to know the legend through his brother’s eyes. –Ischa B.

The Lowbrow Reader Reader
Edited by Jay Ruttenburg
Drag City Inc.
Street: 05.22.12
Despite our own booming zine scene in Salt Lake City, I miss the opportunities to receive some of the bigger titles found in bigger cities. The online universe has opened those doors, but, really, I would love to grab a physical copy of The Onion or The Lowbrow Reader anyplace cool along with my copy of SLUG. The Lowbrow Reader Reader is a best-of collection featuring comedic articles, essays and commentary on society, pop culture, the random and, especially, the obscure. Jay Ruttenberg, the mastermind behind this rag, shares his own thoughts on the likes of Billy Madison and other subjects imperative to the survival of mankind. The Lowbrow Reader Reader is also host to a number of other writers spilling their guts on juicy tidbits such as “A visit with Ol’Dirty Bastard,” by Margeaux Rawson, and one of my favorites in the book, “Ways of Looking at Gene Wilder,” by M. Sweeney Lawless. The Reader Reader offers several interesting perspectives and original ideas on topics that we may already be familiar with. This is an illustrated magazine, so you can expect some classy material from David Berman. –Ben Trentelman

The Place of Knowing: A Spiritual Autobiography
Emma Lou Warner Thayne
iUniverse
Street: 01.21.12
I love a good love-life, feel-good, pick-me-up kinda read, and, though it starts off rather darkly to be characterized like that, this book fits right in that category. It’s an autobiography, a snippet of time in Emma Lou Warner Thayne’s life, when she was forced to look her humanity and mortality dead in the eye when she was literally impaled through her face by a rod that flew off a truck in front of her while driving one day. Although it was a near-death experience for her, rather than simply wallowing, she spent her difficult recovery reflecting on what this life meant to her, and came back from the experience ready to live the rest of her life to the fullest. I love the perspective, and it’s not horribly tainted with religious references, and certainly not offensive, so it’s a fine read about facing something all of us will have to at some point: the prospect of dying. Thayne is over 80 years old, so she’s had time to learn some things about perspective, hardship and perseverance, and she’s a great writer, so the read is smooth and captivating. If you’re in the mood for a lift, pick it up and stop to remember that life is sweet, and to appreciate all the little things, all the good—without having to live through the suffering that inspired Thayne to write this book. –Ischa B.