Book reviews for The Enlightened Cyclist, Next of Being, Official Truth and Slanky. 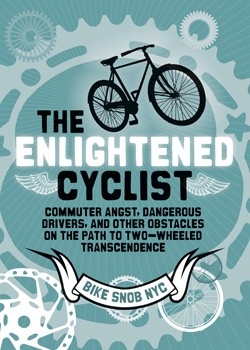 BikeSnobNYC (aka Eben Weiss) has been “systematically and mercilessly realigning the world of cycling” one blog post at a time for years now over at bikesnobnyc.blogspot.com, and in 2010, one of the most comprehensive and entertaining guides to cycling and its culture hit the market with his debut, self-titled book. The second installment in BikeSnob’s pedaling trilogy (the third, Bike Snob Abroad, was released this April) moves like a perfectly lubed chain from the “what” of cycling to the “why.” With chapter titles like “Communion Through Commuting,” “Heathendom” and “The Alchemy of the Mundane,” it’s clear BikeSnob has transcended the temporal realm of the cyclist into the philosophical—and kept his snarky attitude intact all the while. Where the first BikeSnob book stayed close and safe to BikeSnob’s blog fodder (though all snobbery aside, it really is a book I recommend to all of my friends who ride, as a great cycling guide), The Enlightened Cyclist seems more sincere and introspective in its approach. I started the Genesis chapter, “Who We Are, How We Got This Way, And How To Get To Where We Need To Be” and thought, “Wow, this is going to be a beautiful book.” It truly is. Put down your Bible and pick up BikeSnob—he’s the prophet you should be listening to. –Esther Meroño

Pope of the Psychedelic, Alex Grey brings the salivating public another gorgeous large-format collection of his works and career with Net of Being. Any fans of TOOL or the Gnostic/alternative art movements in general will be familiar with Grey’s unique vision, which incorporates elaborate, transcendental imagery and knowledge of anatomy with otherwise mundane (as in typical, not unimportant) human moments, thus elevating them to a sacred, mystical experience. Net of Being showcases many of Grey’s famous works in a beautiful reproduction, interspersed with textual reflections and poetry, as well as press releases, photos of fans’ tattoo tributes, his many live painting sessions and the building and relocation of his Chapel of Sacred Mirrors, a gathering place dedicated to his art and Gnostic exploration in general. There are some really interesting sections, like his attendance of Albert Hofmann’s 100th birthday, where Gray presented an incredible portrait of the godfather of LSD, and Grey’s exploration of the phenomenon of artistic precognition vis-a-vis the 9/11 attacks. I noticed, however, that his work has become slightly less inspired since the early part of the millennium, the Net of Being series in particular having a high level of repetition—it’s not hitting the same, deep places for me as his earlier work. If his poetry is to be judged fairly, he should definitely not give up the paintbrush anytime soon. Fans should enjoy this newest addition to his book collection, but I would recommend earlier, more fully realized books like Sacred Mirrors or Transfigurations to curious newcomers. –Megan Kennedy

Amidst Dimebag Darrell’s larger-than-life mythology and the incessant bickering between Vinnie Paul and Phil Anselmo, Rex Brown has long since taken the “voice of reason” mantle in the ever-fracturing post-Pantera camp. Though he’s the group’s least public member, he’s the most fit to write a memoir on the experience. Brown pulls no punches in his yarn, nonchalantly discussing the spandex-clad inception, multiplatinum explosion and untimely demise of the ‘90s’ most definitive metal band. Most compelling are his unflinching looks into the band members’ individual demons, which never come off as antagonistic or gossipy, but genuine attempts at “telling it like it is.” Occasionally, Brown’s calculated tone hampers the story (metal fans like a little bit of pomp and self importance, OK?) and he’s not much for extraneous details, but it’s endearing nonetheless. As the murder of one Dimebag Darrell becomes more and more distant, no other publication has come this close to truly exploring the impact and meaning of what this band meant to the heavy metal landscape, and for that, Brown’s work shouldn’t go unnoticed, and is highly recommended. –Dylan Chadwick

Last year, Mike Doughty republished a collection of his poems previously released in 1996. Doughty’s poems revolve around urban life, consumerism, LA and relationships. I’m a fan of Mr. Doughty’s work in the post-Nirvana off-kilter band Soul Coughing and as a solo artist, so I expected his poetry to reflect his style as a lyricist. Though they explore the same themes, Doughty’s lyrics are a reflection of early slam poetry (“Screenwriter’s Blues” comes to mind) and his poetry is far from that. Doughty’s word choice is stout and weighted in consonance. Most of the poems lack a clear counted rhythm and are sonically conscious (see the poems “When I Was Small” and “Jungle of Numbers / a deck of cards”), with words carefully selected rather than thrown together haphazardly. Fans of the urban pastoralist James Schuyler or the cultural name dropper Frank O’Hara will enjoy this 87-page collection. Unlike Billy Corgan or other musicians-turned-poets, Doughty doesn’t suck at writing poetry. –Alex Cragun