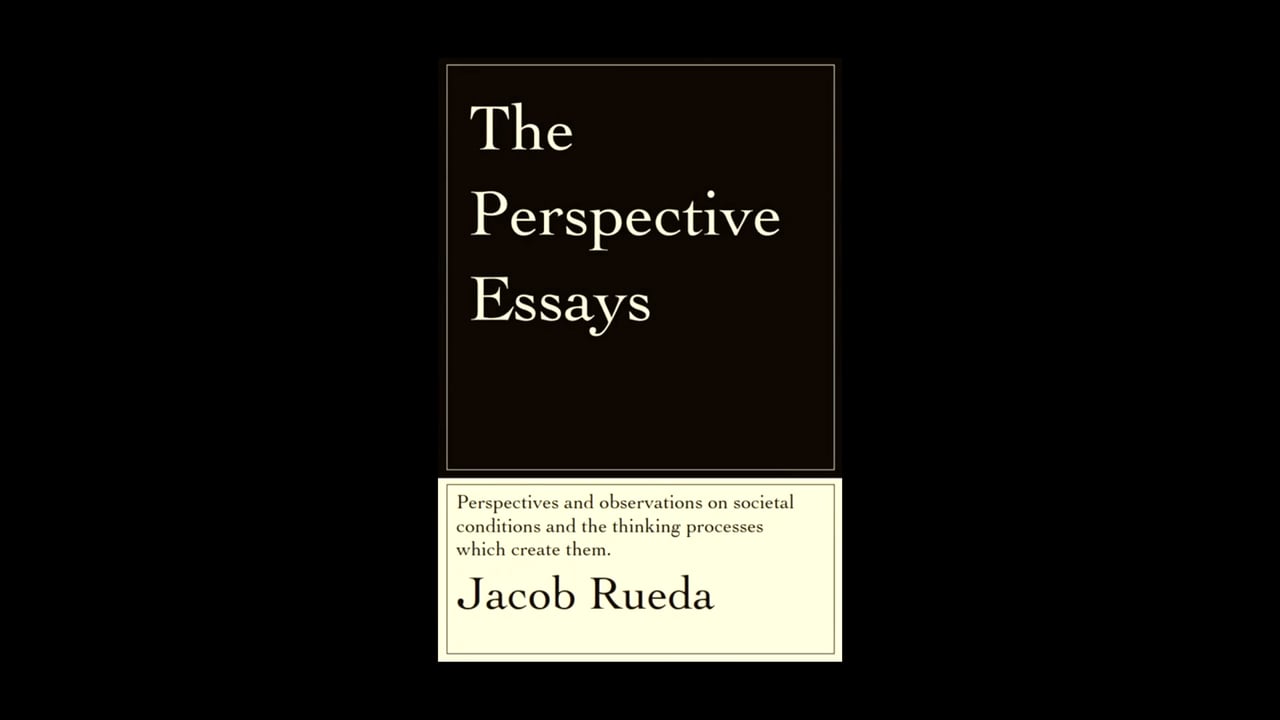 Despite the importance of ideological and rhetorical unity in achieving democratic success,  Trump’s electoral victory has far more to do with the simple efficacy of “MAGA” than it does with any particular promise he’s failed to keep. Such collectivist thinking serves an individual poorly, regardless of political alignment. Moreover, it seems it serves the collective poorly as well, rarely accomplishing in full what propaganda demands. The real world is far too complex, a tangle of dimly glimpsed cause-and-effect chains possessed of too many variables and unforeseen consequences for any simple groupthink to explain it. Those who nonetheless adhere to the party line do so out of familiarity and identity; those that break from it out of frustration too often sink into ineffective apathy. Jacob Rueda knows this and, in The Perspective Essays, challenges readers to be independent, rational thinkers—to evaluate a situation or argument with regard to the circumstances that brought it about, and most importantly, to be active in trying to change the world for the better.

The Perspective Essays covers a range of topics, some as ephemeral as complacency and others as immediately material as destitution. Rueda’s methodology for each remains constant: Instead of trying to modify the situation after the fact or accepting it as simply how things must be, society is best served by breaking it down to its causal circumstances and working to change these circumstances. The ultimate objective is to change the situation from the ground up; for example, instead of prison reform, Rueda would have us render the prison industrial complex obsolete by eliminating physical and cognitive need from our society. A tall order, to be sure, but Rueda insists that it’s far from impossible or even as intrinsic to our society as pessimistic “realists” would have us believe. After all, the prison industrial complex is, like all American institutions, capitalist in nature and thus persists by actively encouraging consumerism and want in its customers—or perhaps more accurately in this case, recidivism in its prisoners.

Naturally, the circumstance of capitalism is the predominant cause of most aspects of our society for good or ill (but make no mistake; Rueda doesn’t counsel communism or fascism or any other sweeping collectivist mode of thought). Thus it’s logical to analyze this circumstance right to the source. Rueda frequently highlights the importance of understanding fractional reserve banking—the method by which domestic and international banks generate money from nothing by lending funds they do not actually possess. This is the great, fraudulent center around which all our public and private institutions rotate. Thus, no individual can ever expect any institution to effect real change, for they have evolved to benefit from the present situation. Of course, for the sake of fair representation, it should be noted that advocates for fractional reserve banking point to it as a great driver of progress and collectively beneficial wealth, but it’s not hard to be cynical about said progress. I digress.

Individuals are the hope and power of Rueda’s philosophy. A common thesis he states most succinctly as “it eventually boils down to personal responsibility, awareness, and choice” sums up his recommended perspective regardless of the issue at hand:

Rueda emphasizes the importance of not mistaking these principles, or any learned by applying them, as worthy of forcefully indoctrinating others. That generates far more resentment and opposition than it does adherence. Instead, though Rueda doesn’t put it exactly this way, be as the allegorical city on a hill, living by example so as to inspire others to mimicry. Of course, however, be wary of your own ego.

The Perspective Essays may disappoint conventional consumers of philosophy. As evidenced above, Rueda’s anarchic, even punk, perspective eschews academic authority as it does all others. For the logical and rhetorical strength of his arguments, however, perhaps he ought to have integrated academia’s prioritization of specificity, examples and sources. Without them, many of Rueda’s premises collapse into tautologies to be taken on faith. Given the consistency of his advice, without specificity each essay reads similarly in content and wording. However, most people are not avid consumers of philosophy, and I’d challenge anyone to argue that Rueda’s isn’t among the most immediate and realistically applicable one can learn. For as Marx noted, most philosophies content themselves with merely describing the world when the point is to change it. The point and practice of Rueda’s philosophy—personal responsibility and carefully considered rationality—is to first change yourself.