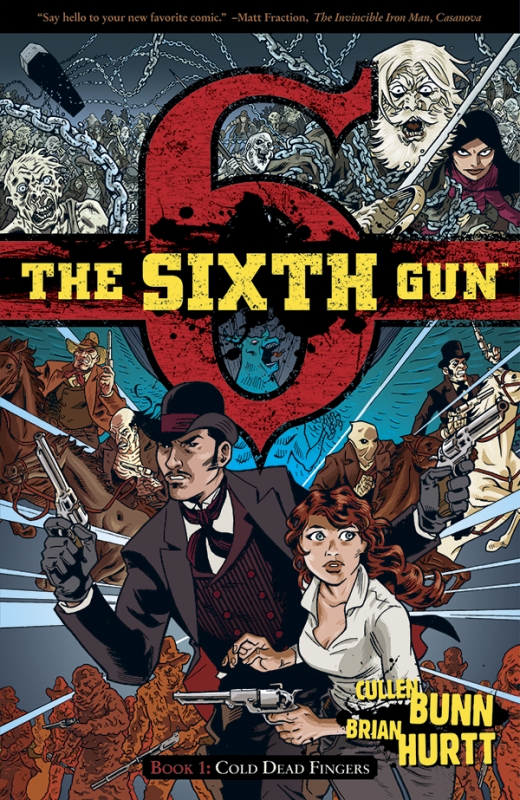 The Sixth Gun is a sprawling story filled with likeable characters, solid emotional beats, adventure, and an ever-deepening mythology.

Comics are one of the few mediums where plausibility doesn’t matter. You’re allowed to take different genres and mix and mash them together into something completely new. No one will question the reality or viability, because comics exist on a little island where literally everything is fair game. Comics are just words and pictures—you can do anything with words and pictures.

The Sixth Gun, an ongoing series written by Cullen Bunn, drawn by Brian Hurtt and published by Oni Press takes that general idea and uses it to do just that—anything they want. By taking a few notes from every other genre and bending them to mesh with a memorable cast, The Sixth Gun is one of the most entertaining books that’s being published. At first, the plot seems pretty straightforward: When Rebecca Moncrief’s father passes away, she inherits his pistol. She soon discovers that this is no ordinary six-shooter. The gun is bonded to whoever picks it up when the previous owner dies, and it allows them to see visions of the future. Soon enough, it’s revealed that Moncrief’s pistol is the last of the Six Guns—a set of evolved weapons that possess unnatural abilities. The gun summons some fierce competition—all of whom are looking for the power that would be attained by possessing all six.

Drake Sinclair, a treasure hunter with questionable motives and a checkered past, is the first to find Rebecca. Sinclair wants the Six Guns for his own reasons, but it soon becomes apparent that the guns’ power is far more sinister than he could have imagined. Sinclair teams up with Moncrief to fight off the evil General Hume—the sixth gun’s original owner—who is trying to collect all six of the weapons to open a vault that would unleash an unstoppable force and alter reality. Oh, and by the way, General Hume has been dead for years. He came back to life in the brief moment that the gun was no longer bonded to Rebecca’s father.

Bunn has gone through painstaking detail to develop full backstories for not only the weapons, but for each character he introduces. Everyone from the main cast all the way down to seemingly insignificant background players are woven together in satisfying ways, creating a dense mythology that’s doled out in bits and pieces over the course of the series. There’s never too much exposition and every bit of backstory is tied into the action at hand. Action is never something that’s lacking throughout The Sixth Gun series. The action scenes are well thought out, meticulously planned and arise out of a natural progression of the story, which is a quality that’s sorely lacking in a lot of superhero books competing for shelf space.

Bunn establishes early on that this isn’t just a run-of-the-mill Western tale. While it is the setting of the plot, Bunn sees too many opportunities to leave it at that. Big action is never more than a few pages away, and supernatural overtones slide right in next to the existential and literal horror tales that are crafted. The characters never take things too seriously, which leaves room for some great comedic bits—especially when 8-foot tall mummies and lizard people begin showing up.

Bunn doesn’t take all of the credit, though. He’s blessed with Brian Hurtt’s art and Bill Crabtree’s colors, and the three of them nail every single aspect of this book. Hurtt is one of the better artists working today and one of the best working on a creator-owned, small-press series like this. The lines are crisp, the detail is amazing and every character feels like an actual, lived-in character.

A lot of artists get away with great splash pages, and breakneck action scenes, but their work on quieter moments suffers. Hurtt’s doesn’t. Bunn isn’t afraid to write a scene filled with emotion that relies solely on the expressions of the characters, because he knows that Hurtt will nail it every time. Hurtt and Bunn even pull off a completely silent issue, devoid of all dialogue, captions or sound effects. It’s one of the most exciting issues in the series—it includes a daring rescue and dangerous underwater escape. The team didn’t skimp on hiring Crabtree, either. He’s one of the best colorists in the business and every image pops off the page. The clarity is astounding. Nothing ever feels rushed, none of the colors blend together and it feels like each volume has a distinct color palette that sets the tone for the story being told.

Bunn and Hurtt have created a sprawling story filled with likeable characters, solid emotional beats, adventure, and an ever-deepening mythology. It doesn’t set expectations too high, though. This team knows how to dole out little victories along the way to keep the audience invested in the bigger mysteries as they play out over time. Hopefully that time doesn’t end too soon, either. The Sixth Gun is a lot of fun and shows no signs of stopping.