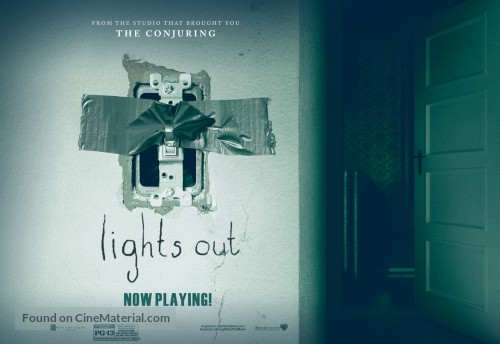 Lights Out is not a movie for the faint of heart— especially those afraid of the dark— but I will say it’s the best scary movie of the year. In 2013, David F. Sandberg created short film Lights Out, and it was such a popular hit that producer James Wan (director of The Conjuring) teamed up with Sandberg to create a full-length film, making Lights Out Sandberg’s directorial debut.

The premise of the movie takes place in the form of family drama. Sophie (Maria Bello) is a mother whose mental illness has led her to the abuse and neglect of her two children, Rebecca (Teresa Palmer) and Martin (Gabriel Bateman). Sophie’s demons take the form of a childhood “friend,” Diana— who is a terrifying monster that can only harm you in darkness. Rebecca, along with her partner Bret (Alexander DiPersia), try to save Martin from the suffering his sister went through in childhood and as help Sophie defeat her demons.

Overall, this movie hits all the right “scary” points. The monster is hellish, but it doesn’t have actual features (at least, not that we see for a while), and it can only attack you in the dark. There is a lot of psychological play that takes place between film and audience members that makes the movie worth watching again and again. But what really makes this movie great is how scarily accurate Lights Out is at depicting metal illness. Diana was the perfect personification of mental illness—she rid the carrier of the illness with guilt and shame; she pushed away everyone that Sophie loved; and she grew weaker the happier Sophie became.

Whether people thought this movie was the epitome of the perfect horror film—which I’m sure many, including myself, do not— I give this movie two thumbs up for showing the world what mental illness really is: a monster that attacks and isolates the people it inhabits. I hope to see more from Sandberg in the future. –Alex Vermillion