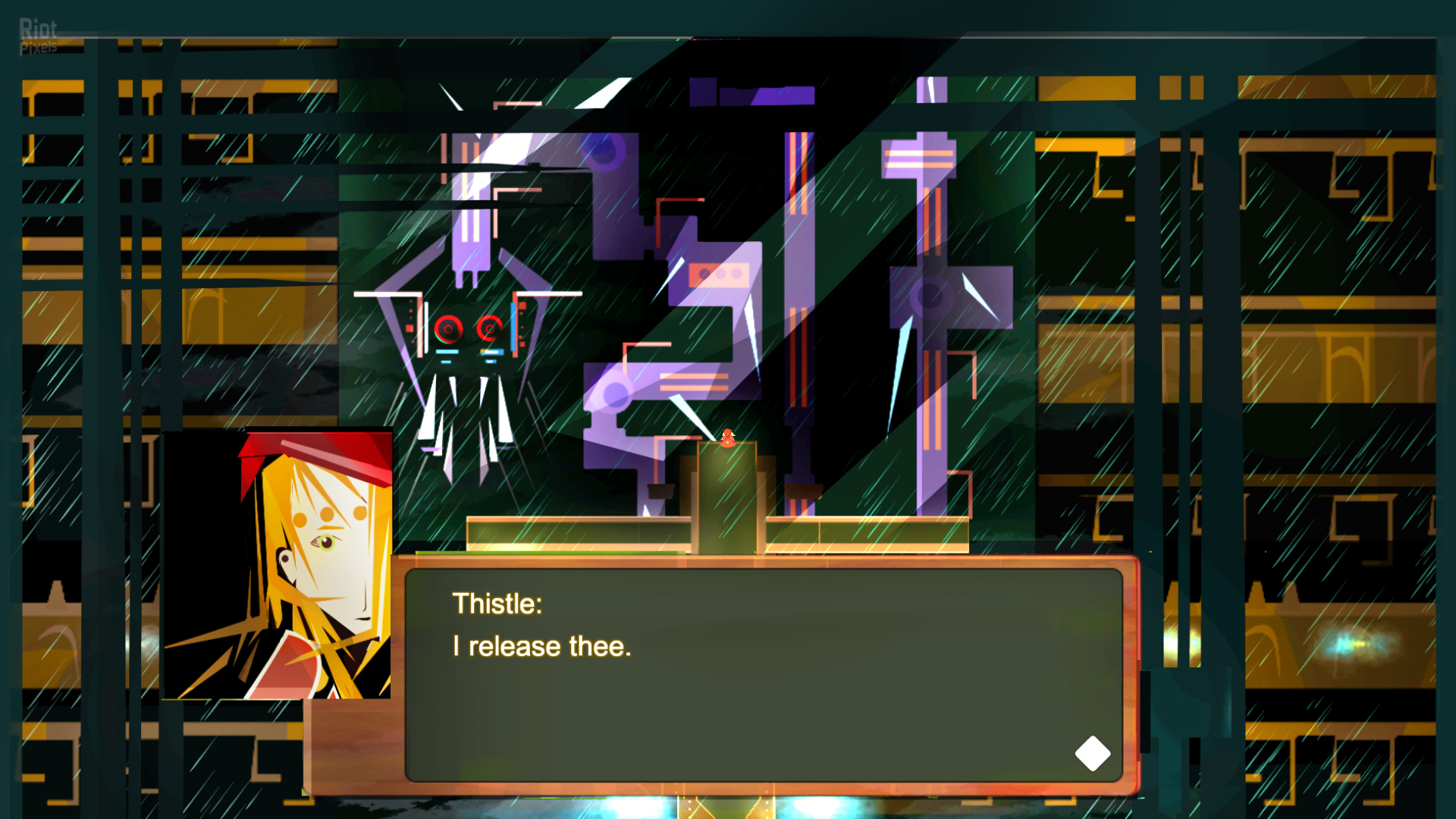 Animal Gods is a beautiful, 2D, top-down puzzle/exploration game that is reminiscent of the old Zelda games. The layout of the map and the dungeons are incredibly similar to that of the top-down Zelda games, but the controls are much simpler. The first thing you’ll notice about Animal Gods is the stunning artwork, which mixes modern and cell-shading styles to create a truly unique style of artwork that belongs only to Animal Gods. There is absolutely no tutorial for the game. You start off by speaking to a mysterious cloaked character about the lay of the land, and the only direction you are given is to travel north, east, south or west. The character explains that each direction will hold a different type of adventure, good or bad, but the overall feeling of the game is pretty ominous no matter which direction you choose. The opening cut scene with this mysterious character is about seven minutes long, and then you begin the game. You get no tutorial on how your controls work or what your character is capable of doing. You explore the map with the direction pad on your keyboard or the WASD keys until you come to some strange black and purple gates that look dangerous. Then, you are given short instructions on how to cross the gates by using your spacebar to dash or warp across them. This is where it gets tricky: You only have a maximum amount of time you can warp, but you can also do short warps by tapping the spacebar really quickly. While you are exploring the map, you’ll come across these different types of gates that are placed in multiple directions, meaning that your timing with the spacebar has to be impeccable as there is truly no room for error. Luckily enough, there is no limit to how many times you can die. If you don’t time your warps just right, you’ll end up at your last checkpoint and have to start that area or part of the dungeon over again.

The story of Animal Gods is slowly revealed to you as you complete the dungeons and you collect pages of a diary written by a woman named Juliette, an occult-leader named Jessuh and a scientist named Sven. These pages make absolutely no sense at the beginning of the game, but about halfway through you’ll start to piece together the story. You learn that your goal is to free the Animal Gods who were once sacred and powerful but have become beasts that are lost to a toxic wasteland. Your character, Thistle, is a quick and agile warrior whose goal is to destroy the curse of the Animal Gods and set them free. You find out Juliette, Jessuh and Sven’s involvement as you read their diary pages and free each Animal God. It doesn’t matter which direction you start the game in—you can complete each dungeon in any order you choose. As you progress through, you gain new abilities and items that help you kill enemies and defeat bosses. After having witnessed the stunning artwork of Animal Gods for at least a good 30 minutes before coming across enemies that I had to kill, I have to say that I was quite disappointed with the way the enemies looked themselves. All of the character artwork—including the mysterious cloaked figure you speak with at the beginning of the game and even the character you play—are as beautiful as the maps and dungeons. Unfortunately, I can’t say that about the enemies you have to defeat while playing through the map. They are literal boxes, yes—boxes. After expecting great characters from this game they give you boxes to slash and hack at with your amazing bronze sword. It doesn’t fit the game style whatsoever, and considering that you have quite a few Animal Gods to free, it’s very underwhelming when you’re supposed to be in the heat of battle.

Overall, the game felt incomplete, and not because of the lack of tutorials or even the way you are just thrown into the game without any story … The entire game took me two hours to complete. One minute I was fighting a boss (which isn’t even that difficult to beat), and then just as suddenly as I was thrown into the game, the credits were rolling. I was genuinely confused, left with more questions than answers—I still hadn’t figured out the entire story behind the game or why my character wanted to free the Animal Gods anyway. I wasn’t super impressed with the gameplay itself, but I was absolutely stunned with the artwork. I see Animal Gods as a piece of art more than a game, to be honest. Unfortunately, I’m no good at reviewing art, so as a game, I wouldn’t recommend Animal Gods unless it goes down in price to $5.99 or $6.99 on Steam—it’s currently selling for $9.99. I think Animal Gods has a lot of potential to be a good game, but it wasn’t really complete. I’d be willing to play through it again if they added more content to it, or even if they explained the story a little better.