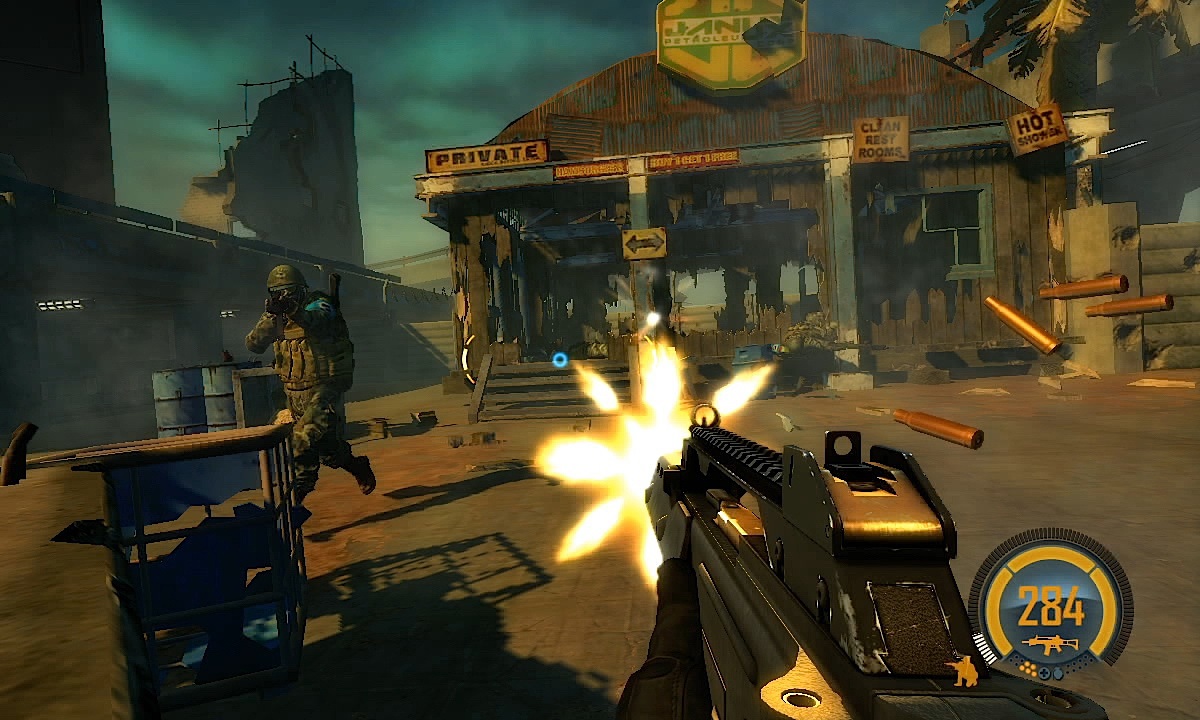 I’ve heard a lot of people complain about this game. No story, moronic enemies, claustrophobic maps etc. Here’s what I say to them: this game kicks ass. I’m not saying that they are wrong; in fact, this game does have a sitcom-thin plot line and the enemies do tend to hang out very near gigantic barrels marked ‘explosive’ during fire-fights and many times you don’t have the option of sneaking around too much, but this game delivers exactly what it promises: ass-loads of wood splintering, blood squirting action. If it were not for the brief chapter breaks (probably to let your speakers cool down) you might never stop shooting. This is the kind of game that you can put down for a week and when you come back, you don’t need to re-orient yourself with where you were or what you were doing, because you’re always doing the same thing, running forward and shooting anything in your path. The weapons and graphics are great; dust and debris hang in the air around whatever it was you just mowed down quite beautifully, and the sound of the gunfire, both incoming and being fired, is perfect. There is a plot somewhere amongst the rubble and smoke, but to be honest, I skipped most of the cut scenes because I felt the voice acting to be overdone tripe. Black is a modern day shooter: no laser guns, plasma rays or aliens, just machine guns and a small army of guys who can apparently take about ten shots in the face before they fall down. Enemy AI is nothing revolutionary, but since you can pick this game up now in the bargain bin, there’s plenty of good to be had here for not much dough. Don’t look for memorable settings or characters here, just a plug-and-play kill-fest overflowing with explosions and shell casings. That’s all Criterion tried for and that’s all they got. This game will never be a Socom or Ghost Recon because of its lack of depth, but that doesn’t mean we can’t have fun playing it. 3.5 out of 5 bullet riddled bodies.  –Jesse Kennedy