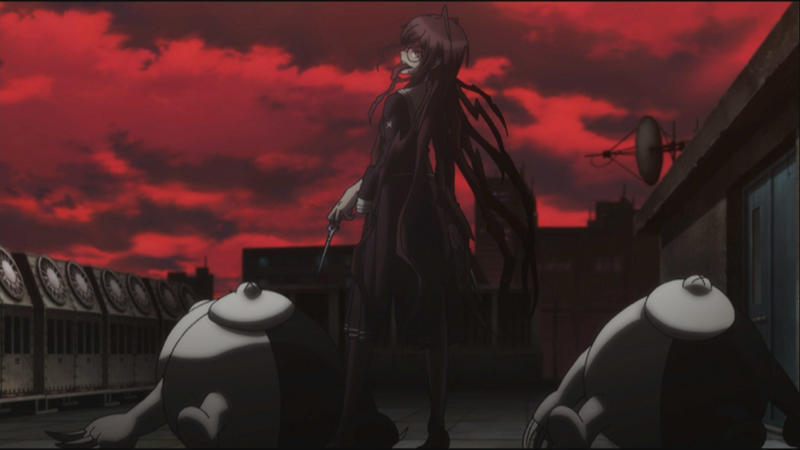 When I started Danganronpa: Trigger Happy Havoc a year ago, it (admittedly) caught me completely off guard—so much so that I had no idea what was in store for me. I intentionally took the arrogant route going in; I didn’t do any research on the game, I dove right in based on a recommendation and was pleasantly surprised that it was a Visual Mystery Novel with a mixture of Phoenix Wright: Ace Attorney, Clue and Japanese insanity. I, Makoto Naegi, and 14 other students wake up in a school that is completely sealed off from the outside world. We are quickly informed by the terrifying-mechanical-teddy-bear Monokuma (representing the mysterious conglomerate, Ultimate Despair), that the only way out is to kill another student and get away with it in the Class Trial. Armed with Truth Bullets, evidence, and recorded statements, you enter the onslaught of verbal attacks and counter-attacks; picking up on contradictory statements, lies, and truths; making it a truly unique, enjoyable and nerve-racking experience. The visual novel aesthetic was hard to deal with at first, but after a few hours the prodigious amount of text, characters, and lore, as well as the over-the-top and demented humor became so enthralling — getting sucked in was unavoidable. Danganronpa Another Episode: Ultra Despair Girls blends everything Spike Chunsoft created with Trigger Happy Havoc and Danganronpa 2: Goodbye Despair and blended them together to create an action game that only the hardcore fans of the series will love, adding fully animated cut-scenes to the already stellar and unique presentation.

Taking place six months after the events of Trigger Happy Havoc, Danganronpa Another Episode takes place in Towa City, the last bastion of hope in the world, which comes under attack following the Ultimate Despair’s eradication of the world. The main protagonist, Komaru Neagi, was taken from her family shortly after her brother Makoto was randomly selected to join the Ultimate Students of Hopes Peak Academy. Inadvertently freed of her captivity by a Monokuma, Byakuya Togami—one of three surviving characters from Trigger Happy Havoc—steps in and gives her a Hacking Gun. Before he gets captured, he tells her to meet with members of his anti-terror group (of sorts), the Future Foundation. Shortly after meeting them for extract, they are ambushed by an innumerable number of Monokumas. Komaru wakes up aboard an airship to meet the Warriors of Hope—Demented children hellbent on creating a paradise free of adults, populated and ruled by children. I got a lengthy introduction to the game’s antagonists—Masaru Daimon, the self-proclaimed leader and ultimate PE student; Nagisa Shingetsu, the calm and collected Sage; Jataro Kemuri, the unstable and twisted Priest who specializes in arts and crafts (particularly dismemberment); Kotoko Utsugi, the drama queen turned Fighter, obsesses over chestnuts and everything “adorbs;” and Monaca, the Mage and emotional center of the group. After Komaru pisses the children off, they label her a demon, strap an explosive bracelet around her wrist, and drop her back into the city to be hunted down in a game aptly named “Demon Hunting.”

After plummeting back to the surface, I’m introduced to the second playable character, Toko Fukawa (survivor, and obsessive servant to Byakuya) and her split personality, the homicidal maniac Genocide Jack. You can switch between Komaru and Toko at any point, but Genocide Jack is a wild card that can only be used as long as the batteries powering her last. Genocide Jack relies on her razor-sharp scissors and deals out massive amounts of damage in quick succession. If you fill up her Scissor Fever gauge, you can unleash her devastating evisceration finisher, Blood Lust; the more you fill it, the more grandiose the outcome. Komaru’s Hacking Gun turns program codes into radio waves, and uses various Truth Bullets. Break deals damage, Burn does what you think it does, Paralyze shocks groups of enemies, Knockback throws enemies, Dance prevents movement for a limited time, Link allows you to control enemies, Move activates electrical equipment and Detect reveals hidden messages and objects. With the exception of Dance, Move and Detect, you must replenish your ammunition by picking up item boxes, pick-ups from downed enemies, or Mano-Mano (vending) machines. Along with bullets, they drop additional health pick-ups, and batteries, as well as mono-coins to buy Bling Bullets for your gun, or upgrade Genocide Jack’s scissors. Bling bullets are special enhancements for your Truth Bullets that can be combined together, and in some cases activate super abilities. Scissor boosts, on the other hand, don’t need to be attached—once purchased, they act as permanent passive abilities, making Genocide Jack virtually unstoppable.

While this game is classified as survival-horror, it’s not your typical jump-out-of-your-seat experience. This is a Danganronpa game, so everything is dark, depressing and filled with demented humor. It’s a complete departure from the previous games in the series and is very much an action title, yet it still moves at the slow, drawn-out pace of its Visual Novel brethren. The mechanics are reminiscent of Resident Evil 4, but my companion Genocide Jack would swiftly and effectively speed things up in a pinch. The controls are fairly tight for a Vita game, but due to the sensitivity of the analog sticks and an oddly placed sprint button, I found it difficult to keep my sights on my intended targets, even with the assistance of auto-aim. There are plenty of linear areas to explore, but there was a lot of back-tracking. I would leave one area, only to return later to pick up keys, unlock safes, or discover hidden treasures. It’s almost as if they did this to make what could have been a relatively short game longer. With that said, I have enjoyed every second of this game and its demented—albeit big and quirky—heart and its fresh take on the universe. While this won’t replace the third-person shooter anytime soon, it’s a great game to own for the Vita and Danganronpa faithful.