Tabletop gaming has an ever-growing community here in Salt Lake City. You might be surprised by what it has to offer—from weekly Dungeons & Dragons groups to board game designers and even conventions.

Get Your Game On! An Interview with Alf Seegert and Ryan Laukat 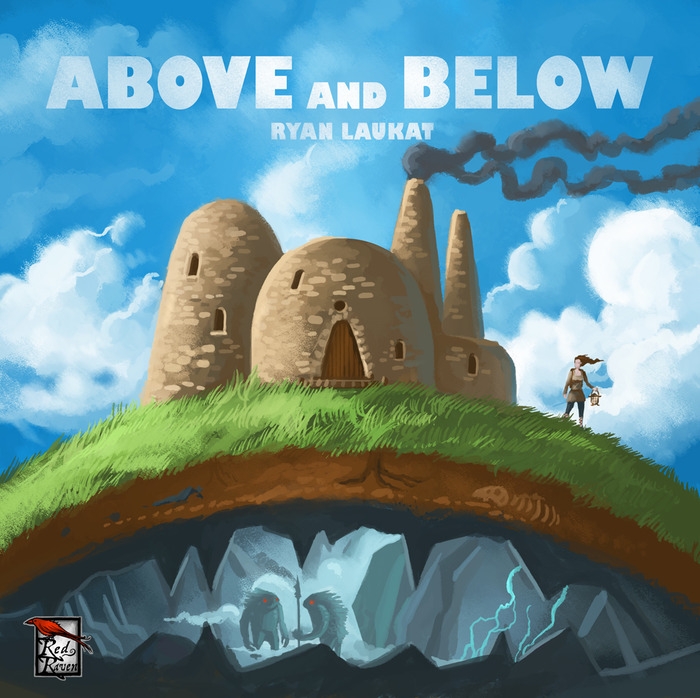 Ryan Laukat and Alf Seegert often collaborate on their projects, as in the upcoming storytelling game, Above and Below. Illustration: Ryan Laukat
Tabletop gaming has an ever-growing community here in Salt Lake City. You might be surprised by what it has to offer—from weekly Dungeons & Dragons groups to board game designers and even conventions. I had an amazing opportunity to interview two of Salt Lake City’s own board game developers—Ryan Laukat—president of Red Raven Games and board game illustrator—and Alf Seegert—English Professor at the University of Utah and board game designer.
Laukat and Seegert met through the Board Game Designer’s Guild of Utah, a place for aspiring board game developers to meet and collaborate. They both felt like the tabletop gaming industry needed some creative inspiration when it came to successfully combining good artwork and great storytelling, and so their friendship began.
“For years, thanks to Seegert, I was an illustrator in the game industry. [Dominion] was the first game that I illustrated for that I got paid for,” says Laukat, who unsuccessfully submitted game designs to publishers like Rio Grande. “I was showing [Rio Grande] a game I designed, and [they] didn’t like the game, but [they] said I could do art for one of [their] games.” Laukat did the artwork for the adventurer and trash card, cards that you will see a lot throughout the game. Laukat has always been into art, and started drawing at a very young age. “When I was supposed to be doing math or when I was supposed to be paying attention, I was drawing. I always got in trouble for that. I’ve always been obsessed with it, just carrying around a notebook and drawing when I can. I don’t have much traditional education in it.” He would design card games as a kid just so he could illustrate them, and if you haven’t seen Laukat’s work, it is very colorful and eye-catching—art that you wouldn’t typically see in a board game, which is what makes his games unique.
Since Laukat had no luck with submitting his board game designs to other publishers, he decided to start his own publishing company, Red Raven Games, which has been around for about three years and produced eight titles so far, some still pending release. His artwork is really unlike any other in the tabletop gaming industry, and his designs follow a RPG and town-building style.
Seegert is responsible for designing a few games of his own, like Bridge Troll and Fantastiqa. “If you look at just the average board game out there, especially the average Euro game, what pains me is that so many of them have so little personality, that there is a theme that could have gone on any game,” says Seegert, who Laukat says puts an emphasis on creating, “unique game themes that delve completely into their created world.” Seegert has designed the theme and mechanics for seven published board games, all following closely to the Euro gaming style of good mechanics, but at the same time not sacrificing good illustration like Euro games are known for doing. “King’s Bounty: The Legend is a beautiful game that is underplayed, and that was a big influence on my game Fantastiqa, where you just gather a bunch of creatures up and they end up filling up your deck and I guess that’s kind of a Pokemon mechanic.” Seegert will borrow ideas from other successful games, but will put his own twist on them and make them his own. He brought up a good point that people who create are so focused on coming up with a new idea that has never been thought of, when instead they could be taking existing ideas and using them as a starting point for something that is even better.
Laukat and Seegert really love working together as well. They are currently creating a game called Above and Below that they will be debuting at SaltCon in March. Bridge Troll is an already published collaboration of Seegert and Laukat’s work, a game that includes great game mechanics and beautiful artwork.
You can see Laukat and Seegert’s work for yourself at SaltCon, which will take place at the Davis Conference Center from March 12–14. They will be hosting a panel together discussing their work as designers and as an illustrator. Laukat will have his own booth featuring his artwork and titles from Red Raven Games, and Seegert will be in a neighboring booth with his own game titles. Come see these creative and inspiring game designers as they openly share their thoughts, ideas, and work.
As someone who plays a lot of Euro and American games herself, I can honestly say that Laukat and Seegert’s games are one of a kind. I feel like I have to sacrifice either simple game design or captivating artwork with most games. It is very refreshing to have games that satisfy both elements of tabletop gaming, and to have designers who care enough about creating a fantastic gaming experience all around. I look forward to seeing what Laukat and Seegert will create in the future.
Ryan Laukat and Alf Seegert’s upcoming game, Above and Below, is currently on Kickstarter. It’s already fully funded, but for the next 19 days, you can help push for stretch goals and get an expanded version of the game that includes all of the stretch rewards and more great goodies! You can check out the video for the game below:
Photos: