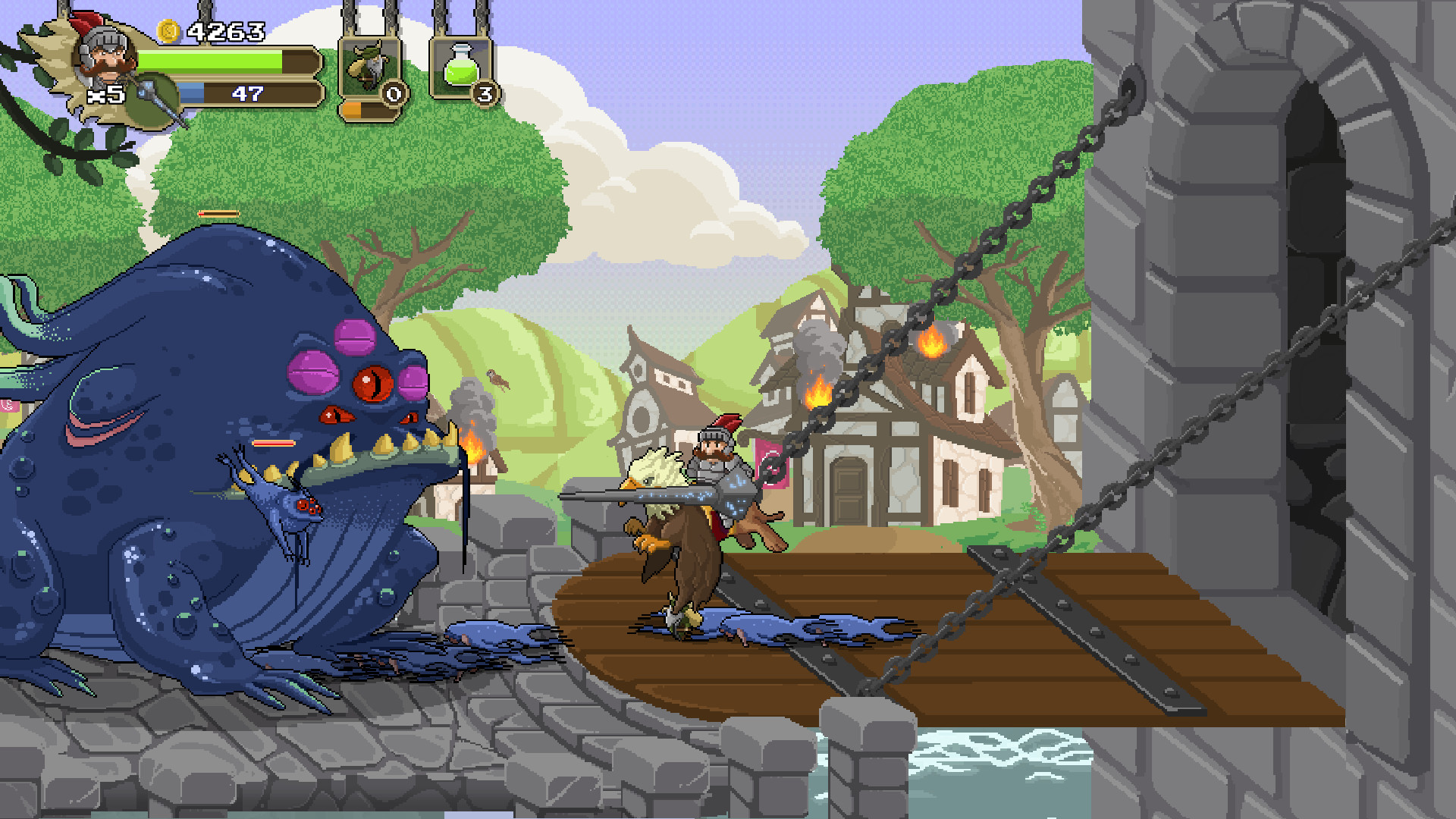 Gryphon Knight Epic is a medieval themed side scrolling shooter done in a pixellated art style. The dialogue in this game isn’t the greatest, but the gameplay itself is entertaining enough. You play as a knight with a dashing mustache named Sir Oliver, who, after saving a princess with a group of 6 other heroes and then marrying her, becomes a dad and falls into the mundane, everyday life of fatherhood. The game starts when your castle is threatened by a mysterious force… a force who is also as devilishly handsome as Sir Oliver himself. This mysterious force turns out to be your dark self, or the evil version of Sir Oliver. Evil Sir Oliver manages to get away after a brief battle with Sir Oliver and his knights. The plot of this story is simple: You battle your way through 8 levels and 6 bosses—the 6 heroes who once helped you save your princess—before battling the main boss, Evil Sir Oliver. As you try to find out why your group of heroes went rogue, you also have many secrets to discover throughout the game that help you level up.

The gameplay is very simple, you fly around on your griffin sidekick, who you control with the directional arrows and use the Z, X, C and V keys to fire a variety of arrows and projectiles at your foes. Unlike traditional side scrollers you can actually turn your griffin around and go back through the level. You gather gems throughout the levels to upgrade your crossbow and buy other defensive or offensive measures. Flying the griffin is easy, and shooting stuff is always fun. I enjoy the simplicity of this game as well as the humorous sound effects. The soundtrack to this game is oddly charming and suits the game quite well, though it’s not something I would listen to on its own.

One of my favorite features of Gryphon Knight Epic is that you can actually choose the difficulty you want to play for each individual level. This feature is nice because it can also add on a few extra hours of gameplay if you like to play through games on normal difficulty before playing through them on difficult. On normal difficulty this game took me about 4 hours to complete, and I wasn’t being incredibly thorough with going back and killing all of the foes that I had missed. If I had been more thorough, I’m sure this game would have taken me 5 hours to complete, but I was able to complete the game without too much difficulty. I’m sure I’ll go back and try playing on epic mode to see if I rage-quit.

As I’ve mentioned before, the dialogue is nothing special. It’s not witty or funny, but it’s also not awful. It’s short and sweet, which means that all of the cut scenes in this game are short, too—which is fantastic if you’re impatient like I am. The game is more focused on keeping you playing than trying to dazzle you with theatrics, and that’s refreshing. Gryphon Knight Epic definitely doesn’t try to convince you that it’s better than it actually is. It makes fun of its simplicity and even pokes fun at the traditional medieval storytelling that most RPG’s fall into. It’s a quirky little game that could be played and enjoyed by anyone of any age or gaming skill level.

I appreciate a game that is good and simple, and that’s exactly what Gryphon Knight Epic is. You don’t have to be good at games to play it, and you don’t really have to enjoy shooters to have fun either. $12.99 is a fair price for this game, especially considering that the developers have listened so well to their players and have responded in a timely manner to any bug that has occurred with the game. I recommend you try Gryphon Knight Epic out if you’re looking for a game that isn’t too complicated or if you just want to shoot some stuff.