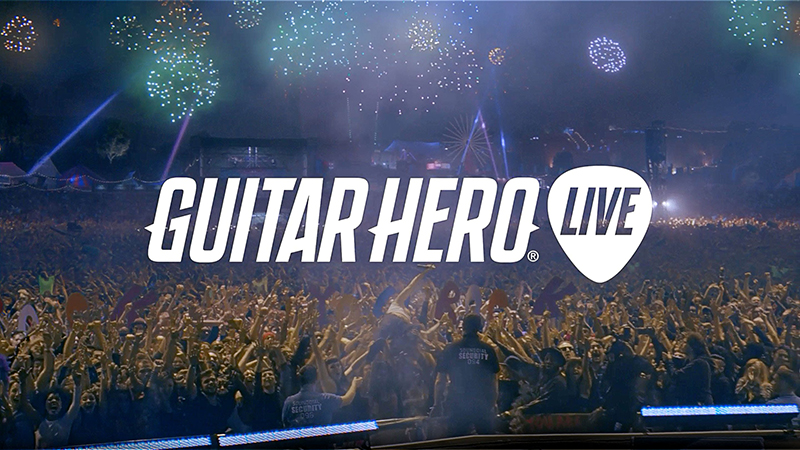 Guitar Hero Live hasn’t changed the way music games are played, but it has thankfully moved away from those terrible graphics and fake crowds. Guitar Hero Live has gone above and beyond with recording actual people for the crowds and your bandmates, so it looks a little more real. They’ve also changed up the guitar fret placement—instead of the five color coded frets down the neck, you only use the top three, but they’re split in half. It takes some serious getting used to, but it’s also more streamlined and introduces barre chords to the roster of “moves.” The setlist includes all of the old favorites that you’re used to along with the fresh additions of newer hits. It all combines to make Guitar Hero Live a worthy purchase.

Guitar Hero Live has two main modes—Live and TV. Live is the small campaign where you’ll encounter the recorded footage of real people and it’s also where you’ll start your rocker journey. You’ll play through the tutorial, which is played out like a sound guy checking your guitar before you rush onstage. It’s a nifty way to approach the typical tutorial that I really appreciated because I had to play through said tutorial to learn the weird new fret system. There’s a top row, shown as a black pick on the guitar neck while the bottom row shows as white. This means some seriously complex combinations on the harder difficulties. It broke my brain trying to get it right in the first few songs, which led me to see the darker side of my crew and the crowd. When you go from rocking it to tanking it, you’ll see a brief lens flare and then the angry faces of a lot of people, including your fellow bandmates. Their angry faces get kind of tough to take, but the crowd throwing things at you is just mean. I even had one of my fellow guitarists in the game throw something at me during one of my more awful playthroughs. The worst part is that they’re not really angry, they’re just very disappointed in you. Okay, maybe they’re a little pissed about you blowing this for them, but don’t worry! There’s Hero Power to the rescue! I guess star power just wasn’t enough anymore.

Having real footage of people was infinitely better than using CG characters. My only complaint about the Live section is that it’s too short. You’re going to see your favorite songs over and over, and the setlist for just the campaign is so meager that it won’t take long before you’re over it.

This brings us to Guitar Hero Live TV. There’s always music videos you can play going nonstop, with several different channels to choose from. When you log on, you can either hop right into a random music video to start playing along, or you can pick from the vast array of music videos. The former is like playing the game on shuffle, which is especially helpful when it’s you and friend and neither of you can decide what song to play. The latter is just expanding the library so there’s way more options on what you can play, but you’ll have to earn every play. If you’re out of play tokens, you’re at the mercy of the channels, but you do get to pick the channel so you may just discover a new song.

This isn’t just a library expansion—it’s a competition. You’re not just logging on and playing songs for funsies, you’re playing for a high score to level up and collect coins for in-game purchases. Leveling up gets you access to new, shiny things in the store—playercards, note highways, hero power items and free play tokens. Playercards and note highways are the only customizable things about the game—the playercard is just what shows up on the screen at the end of the song. They’re really not worth spending your hard-earned coins on—it’s all about those free play tokens and hero power items. Naturally, you can just buy these things with real money, but I never felt like it was necessary to do so.

Guitar Hero Live is the first Guitar Hero in five years and I know the question on everybody’s mind is whether to bother adding more plastic guitars to your collection. The answer is yes—yes you should. The new fret system makes for a challenging new chapter in GH history and while the campaign is barebones, the TV section will keep you entertained for hours. There’s just something about winning in Guitar Hero that’s addictive.

[Editor’s Note: We switched out an image of the angry crowd, as it contained an image of a white dude wearing a headdress, which, we agree, isn’t cool.]