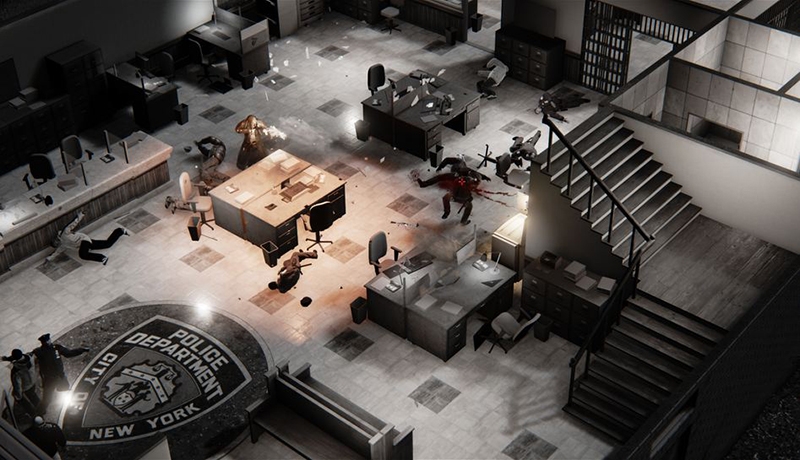 An exercise in frustrating controls and bland gameplay, Hatred succeeds mostly by the efforts of its marketing team.

In my 25 years of gaming, I’ve spilled my fair share of virtual blood. The treads of my boots are gummed up with remnants of Goombas, my fists are sticky with the blood of fallen Mortal Kombatants, and I don’t even want to calculate the number of zombies that lie slaughtered at my feet. Granted, most of the creatures that I’ve killed damn well deserved it, what with their world dominating and princess kidnapping. It wasn’t until I got into the Grand Theft Auto games way back in high school that I started questioning the reasons behind all of this video game violence. Sure, the game allowed me to roam around Liberty City with an AK-47 and indiscriminately gun down civilians until the fuzz brought me down with a fleet of police helicopters, but where was the fun in that? That’s like buying a Maserati and spending all of your time freaking out about the power windows. GTA simply reinforced something that I had learned from watching Quentin Tarantino movies: Violence in entertainment has a purpose—just as long as it has a purpose. In Reservoir Dogs, for example, Mr. White sheds his tough, gangster exterior to placate Mr. Orange after the latter has sustained a gunshot wound to the stomach. The fact that Tim Roth is quite literally drenched in blood during this scene helps emphasize a human moment between two criminals. When GTA 5’s Trevor Philips tortures an informant in one scene but helps Michael’s daughter understand her self-worth as a woman in another, we see that it’s possible for violence and compassion to exist inside one character. While both media portray some serious gore, it’s used as a crucial part of the storytelling—violence is part of the creative process.
So, where does that leave the angry, monochromatic oddity that is Hatred? It has no shortage of violence—the plot of the game is to take control of a psycho and murder as many people as possible. And that’s it. The game offers no explanation as to why a player should guide this greasy-haired maniac on a killing spree, and therein lies the game’s biggest problem. As pervasive as the violence is—your character regains health by performing executions on victims—it begins to lose its impact since there’s really no motivation to keep playing other than racking up a sizable bodycount. As uninspired as this over-reliance on a violent concept was, it managed to stir up a hornet’s nest of controversy when the game’s launch trailer debuted in October of last year. It built up some solid hype when Steam pulled it from its Greenlight Program (it was later reinstated), and video game critics far and wide bemoaned the game’s nihilistic sensibilities. When Hatred was released on the first of June, it topped the charts on Steam, outselling other popular titles like The Witcher 3 and GTA 5. While I have to praise the marketing department of Destructive Creations for using hype and controversy to make their game more appealing, after having played the game, I can’t help but feel like we just fell victim to a snake oil salesman who has just skipped town with our hard-earned money.
While the fact that the developers have touted Hatred as a war cry against games that are “heading to be polite, colorful [and] politically correct” might keep the angry nerd in you entertained for the first few levels of mindless slaughter, serious gamers are going to start with the nitpicking—and there’s a hell of a lot to nitpick. The physics and destructible environments are the best thing about Hatred, but they get stale after witnessing a car explode for the billionth time. The controls are buggy as hell, and I often paused amid chucking grenades into convenience stores to wonder why New York City had any crime at all when the cops outnumber the civilians four to one. Eventually, I forgot about the entire premise of the game because I was trying to navigate poorly lit levels with often unresponsive controls. This is the point at which those who bought the game have to start kicking themselves. Dropping 20 bucks on a game that lured you in with its unapologetic lack of social conscience only to get stuck with a clunky exercise in virtual masochism? Isn’t it ironic? Don’t you think?
It’s a jagged little pill to swallow, but Hatred’s success isn’t based on the fact that it’s on some crusade to bring gaming back to the basement-dwelling misanthropes where it allegedly belongs. While some people will praise the game for its ballsy premise and its “Adults Only” ESRB rating, Hatred owes its success not to the developers, but to the marketing team. They stuck to their campaign of pushing a gritty, mature-themed slaughterfest into the hands of the public, and they made it happen regardless of a few setbacks along the way. In essence, they’ve been able to package and sell an idea instead of a game, and, as any fan of Mad Men will tell you, that’s a marketing director’s wet dream.
Regardless of one’s opinion regarding Hatred, the decision on the part of Destructive Creations to develop and release such a cynical piece of entertainment doesn’t speak very highly of the audience that is currently downloading their work. Investing all of that time, money and talent into something that is little more than a bit of adolescent revenge-fantasy paints a pretty grim picture of today’s gamer; one that clings to the idea that those who play video games are social outcasts who use games to lash out at a society that doesn’t understand them. That all became bullshit when video games started outselling movies. It’s taken a long time to shed the negative social stigma of being a gamer, and I can’t help but cringe when I smell someone trying to recapture those dark ages.
Photos: