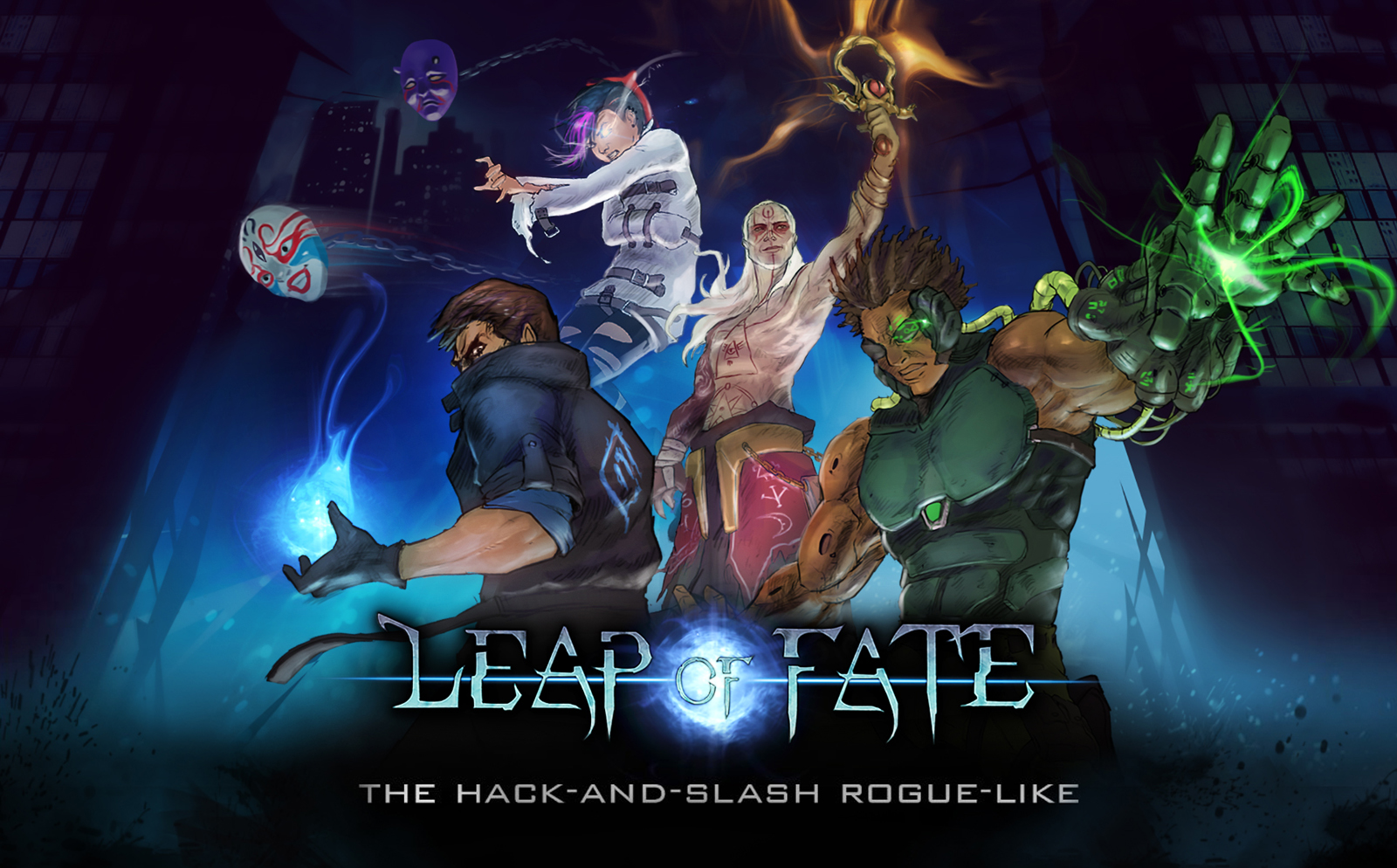 The cyberpunk techno-fantasy genre of games like Shadowrun and films like The Matrix is a niche category for sure, but the idea of combining sci-fi and fantasy has always held unlimited storytelling potential, especially in the field of video games. After playing the early access version of Leap of Fate, it appears as though the folks at Clever-Plays are also attuned to this potential. Even though the game is still evolving, they’ve planted the seeds of an interesting backstory to accompany the roguelike journeys of a solitary technomancer on his journey to defeat a punishing set of trials known as the Deck of Fate.

Throwing a deck of cards into the mix typically denotes a collection aspect, but in this case, the deck functions like a battleground. The dealer arranges the cards face-down, and the player can only see two at a time. Each card can represent a combat challenge, a sacrificial altar, an opportunity to upgrade a skill tree—it all depends on how the cards are dealt. As with many roguelike games, success and failure are largely determined by the loot drops that a particular run through offers, and Leap of Fate is no exception. There were runs where I was hopelessly outmatched right at the beginning, but there were also runs in which I was given exactly what I needed exactly when I needed it.

One aspect of the game that deviates from the rogue-like genre is the skill tree. The more a player encounters upgrade cards, and has resources to spend, the tougher their character gets overall. It’s a clever way to inject some feeling of permanence to all of that creep-killing, and since using secondary attacks to generate kill-combos results in glowing purple balls of currency, it’s a great way to encourage players to be creative with their arsenal.

Currently, the game only has one playable character—a duster-clad techno-mage who fires arcs of electrical energy—though three more are scheduled to appear as the game develops. Each character has two supplemental attacks that have limited use, and these can be switched out if you come across a glyph card. A large chunk of the game is spent mowing through waves of enemies, and though it has a tendency to get repetitive, there is enough freneticism to keep things snappy. Developing a quick set of reflexes to balance primary and secondary attacks quickly becomes the only way to succeed in these encounters. Though the level designs could use a bit more variety, the enemies and their attack patterns were well thought-out—almost painfully so. It’s not too challenging to get used to an individual enemy type, but the game likes to throw in an aggravating cocktail of genetic mutants that vary in speed and ability. The destructible environments are endlessly useful here—though it’s sometimes easy to blow yourself up in some of the more cramped encounters.

As the game’s updates roll out, it would be good to see the levels adopt a more procedurally-generated feel. Since players can expect to die and restart a lot, they’ll also become more acquainted with the limited layouts of the existing levels, which makes it easier to cheese levels by hiding in a certain spot. I’m also dying to see how the new characters and their abilities modify the gameplay. Though he’s definitely a good character to start with, the current technomancer’s loadout didn’t quite jive with my playstyle. In order to avoid the replay value ending up in the toilet of fate, the game’s future success will hinge upon how they approach their new characters. Having the opportunity to take one of four uniquely badass characters into a randomly-generated carnival of mayhem is the essence of roguelike gaming, and doing this well is all Leap of Fate really needs to do to be a success.