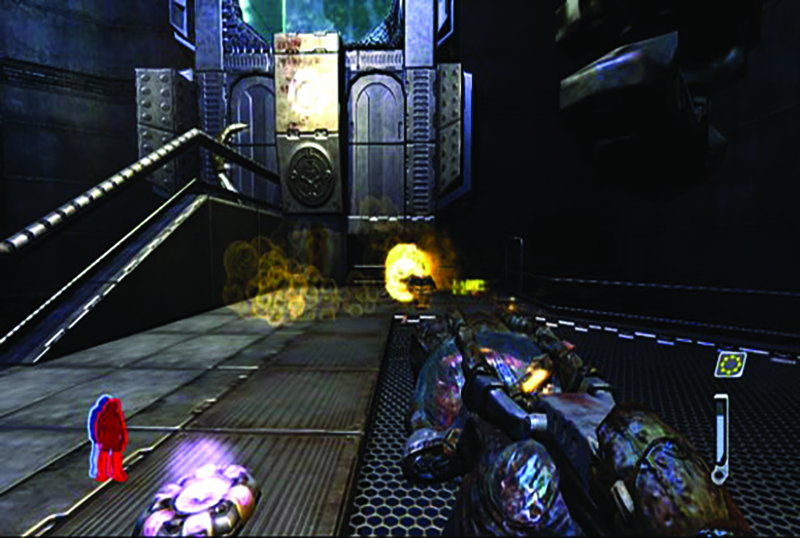 It seems that sci-fi first person shooter (fps) games are everywhere these days. Games like Halo, Half Life and Doom (and all of their sequels) have established this genre as big money for game developers and guaranteed plenty of mediocre rip offs for gamers. I’ll tell you right now, there’s nothing revolutionary about Prey. Prey looks a lot like Doom III (same developers) and doesn’t offer much in the ways of mind-blowing graphics, compelling storyline or memorable settings. What Prey does do well is offer fps fans a solid game with some interesting twists. I said the graphics aren’t fancy but that doesn’t mean this game looks bad, on the contrary, Prey looks like many recent shooter games to hit the market. I played the PC version and I was amazed that this game, for as good as it looked and played, never once hiccupped or crashed or slowed down. EVER! My biggest gripe about this game is its corridor style of layout, meaning you just keep plowing forward (everything behind you is dead) and you don’t get a lot of open environments to roam around in. This layout, very common in fps’ers, usually results in a shorter game. My There are relatively few enemies that offer themselves up for premature extinction in Prey. Most rooms have just a few naughty aliens to shoot at making this game a bit too easy the first time around. There are a few pleasant surprises to be found in Prey, such as rooms that can have their gravity moved to any wall and powered walkways that allow you to walk across ceilings and walls. The upsides down perspectives and the use of portals make for some entertaining and disorienting battles. Another twist is the ability to leave your body in ‘spirit’ mode in order to unlock doors or gain information to keep your mission moving. I should mention here that your character is a Native American so this ‘spirit’ mode is accompanied by some really cliched Pow Wow music. However, this lack of musical taste is not going to keep me from recommending a solid game with plenty of action and scares for fans of this genre. 3.75 out of 5 decapitated attacking space zombies. – Jesse Kennedy