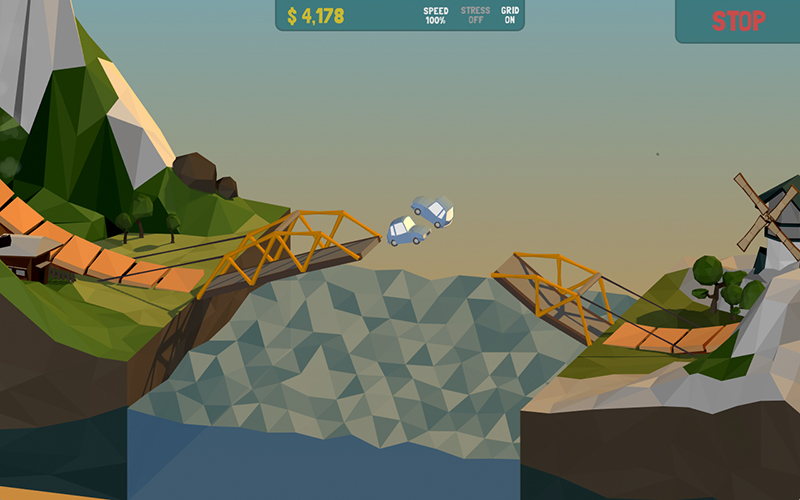 My bridges are safe AND fun.

Poly Bridge is a physics-based, bridge building simulation game. This means it’s the PC equivalent of the classic teamwork exercise your middle school teachers put you through—the one where your team had a pile of hard little marshmallows and a bunch of toothpicks and you had to make a better tower or structure than the other teams in the class.  Except now, you don’t have to play with your stupid classmates, so it’s fun.  Poly Bridge is a quiet, pleasant little game. It doesn’t punish you or rush you, and its pleasure comes from seeing your careful construction choices play out successfully in the pretty, low-polygon style simulation mode that runs once you’ve finished building.  It’s basically Word Of Goo with more engineering and less personality. Those are both improvements, for my money. The folksy soundtrack is relaxing and the different objectives result in a wide variety of bridges. You’re scored on “joint stress,” “material footprint” and “budget,” and the materials you have access to steadily expand over the 60-plus stages. Poly Bridge is currently in early access on Steam, but it feels very polished compared to many early access games. Go check it out. –Jesse Hawlish