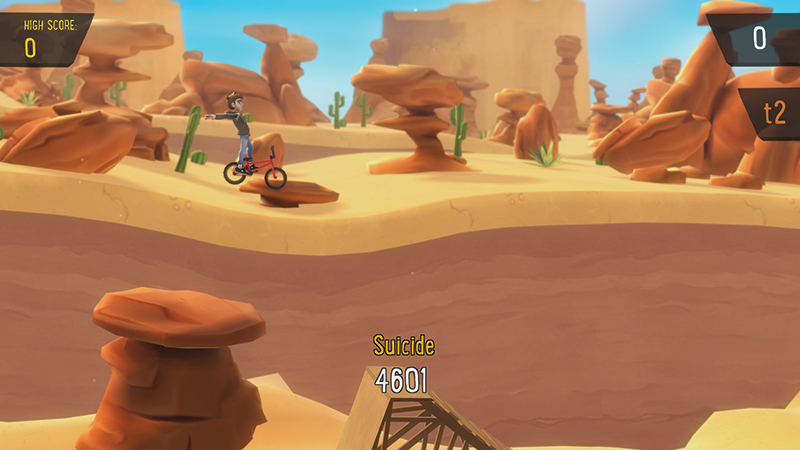 Yeah Us! received a lot of critical and commercial success when Pumped: BMX and Pumped: BMX 2 were released on mobile platforms in 2012 and 2014—so much so that Curve Digital partnered with them to produce a console version of the two. They’ve completely overhauled the control scheme to better fit a controller, improved the graphics and added an entirely new—and fantastic—soundtrack to this definitive edition. It’s built on the simple, sometimes frustrating, momentum-based mechanics of Trials, utilizes the always hilarious ragdoll psychics, and is presented as a two-and-a-half-dimensional, platform-racing game with a stylized cartoon aesthetic, much like Joe Danger. After getting over the irony of my avatar looking like a lifeless character from Coraline, I started to figure out how everything worked. Moves are mapped to the right stick, which can be modified by pressing L1 or R1, while spins are done with L2 or R2. Pumped BMX + is a total blast to play and gave me endless amounts of laughter when things didn’t go according to plan. While it’s not as deep as Trials or even Joe Danger, it’s a great pickup at $10. –Trey Sanders