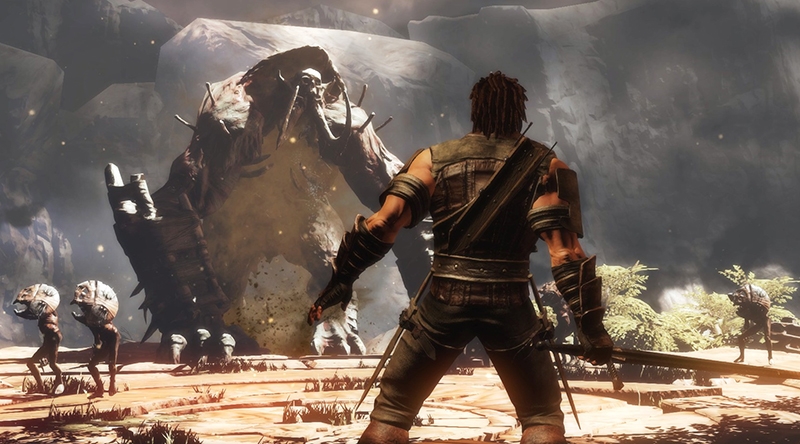 I wonder what that thing looked like when it was still alive.
BlazBlue: Chrono Phantasma
ARC System Works
Reviewed on: PlayStation 3
Also on: PlayStation Vita
Street: 03.25
BlazBlue: Chrono Phantasma is the newest installment in the fighting franchise from Arc System Works, and it does not disappoint. This game brings plenty to the table for returning fans of the series as well as players new to the world of BlazBlue. Immediately, the beautiful high definition character design and hand-drawn backgrounds set this game apart from others of its genre. The over-the-top action of this series may appear intimidating, but Chrono Phantasma’s tutorial modes do an amazing job of putting you in control, covering everything from the basics to character-specific tactics. Each character in BlazBlue has his/her very own play style, which gives players the option of multiple playthroughs. There is a slight lack in storyline compared to previous games in the series, but I didn’t mind at all because this title has plenty more to offer. Outside of story mode is BlazBlue’s Abyss Mode, an alternative take on survival mode, and a finely crafted online experience with an impressive matchmaking service. Chrono Phantasma is an impressive installment in the BlazBlue series, and I highly suggest it to any fan of the genre. –Nate AbbottBound by Flame
Spiders/Focus Home Interactive
Reviewed on: Xbox 360
Also on: PS4, PS3, PC
Street: 05.09
Like many modern RPG’s, Bound by Flame has scaled back on storyline in favor of a punishing combat system.  If you’re into that kind of thing, Bound by Flame is not a bad investment.  In a given combat situation, the player can switch between a hardy, damage-heavy fighter stance and a quick, sneaky ranger stance.  After mastering the basics, it becomes fun to critically assess each enemy and decide which stance is going to be most effective.  The combat system is not without its frustrations, however.  For example, if your player manages to get knocked over and you’re up against more than one enemy, it often spells certain death.  The story is told through jarringly inorganic voice acting and dialogue, complete with M-rated language that felt shoehorned into the cinematic cutscenes.  Add that to a flimsy storyline, and it gets hard to give a damn about investing the necessary time to master the game’s sophisticated combat mechanics.  It’s definitely not for everyone, but the enthusiasm with which Bound by Flame sticks to its guns—er, daggers—is commendable.
–Alex SpringerFinal Fantasy XIV: A Realm Reborn
Square Enix
Reviewed On: PS4
Also On: PC
Street: 04.15
Final Fantasy XIV is a beautiful way to kill hours of what could otherwise be a productive afternoon through relentless grinding and the exploring of beautiful environments. Luckily, MMO players are able to easily settle into the system, since it follows many of the predefined MMO norms. While this did offer an occasional stale feeling, it also allowed experienced gamers to fall in quickly. There is also enough focus on story, combined with side quests, to keep the player enthralled. The travel system built by the Aetheryte network in cities makes jumping through massive towns easy, and Chocobo rides are always a blast. Exploration is made more interesting by Fates that are strewn throughout the world: These real-world incidents allow you to finish events that provide you with additional cash and experience. They also give you an opportunity to work with other players for mutual gain. While a keyboard and mouse is generally preferred, the PS4 controller lends itself to the genre very well, utilizing the touch pad and D-pad to navigate your huge tree of abilities. This game is addicting for one and all, and definitely worthy to live beside the MMO greats. –Thomas Winkley