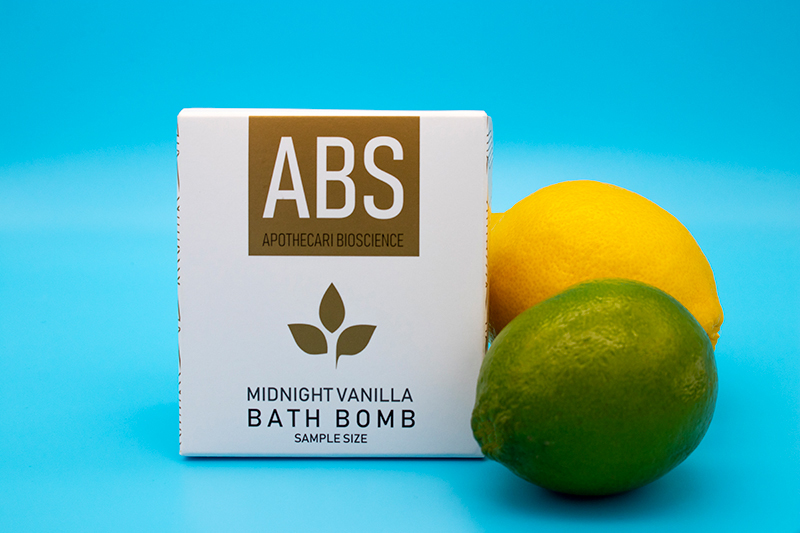 ABS is Making a Dent For Your Zen

The booming legal, non-psychoactive cannabidiol (aka CBD) market is making statewide waves with ever-increasing venues and products. Since its legalization several years ago, CBD-infused offerings have become widely accessible; shops, farmers markets, even local grocery stores are openly sporting a widening array of options. Amid the stream of popularity for these products are several developing purveyors specifically honing in on the CBD market.

One of these businesses is burgeoning via a focused and small line of balms, tinctures, vape cartridges, bath bombs, massage oils and supplements. Apothecari Bioscience was founded and is operated by combat veterans and retired law enforcement officers, with their primary location now in downtown Provo. Somewhat relabeled, ABS purports the healing and wholesome benefits of their products, a claim being further validated empirically and anecdotally over the past few years in the science of CBD as a whole. Clearly a homefront company, ABS forged their products in an effort to heal the myriad health concerns of veterans and individuals living with chronic pain and illness issues.

“ABS attacks the opiate epidemic with few pulled punches, making a statement about their mission and values, one especially salient in the local wellness community.”

Over several weeks, I sampled the “ABS Starter Kit,” initially available on their website and storefront. The sampler includes their bath bomb, desiccated CBD capsules, 1250mg classic tincture and their balm for topical usage. Something of a personal appeal surrounds their products, having been birthed from their founders’ struggles with nerve pain, mental health issues and eventually the black hole of long-term opiate dependence. On their website, ABS attacks the opiate epidemic with few pulled punches, making a statement about their mission and values, one especially salient in the local wellness community. Per their attestation, their products are vegan, organic and responsibly sourced domestically. The company is currently run by two sisters, again only evidenced in their self-written statements online, thus to be digested as their own lens on the many apparent virtues of their business.

I began my trial with the Midnight Vanilla bath bomb, one of three proprietary scents alongside Rosemary Eucalyptus and Royal Lavender. All of their bath bombs contain 30mg of total CBD, and my sample also came with a pleasing cerulean hue that suffused a Friday night bath with warm waters as blue as any enviable, Instagram-filtered photo of a Carribean shoreline. Also of note was the light and pleasant aroma, which was not overwrought or intensely perfumed—perhaps a good call for a product intended to be inherently therapeutic.

Although my end-of-week relaxation was enhanced by a blue-water bathtime, it’s difficult to say for certain whether the variable of ABS’ vanilla bath bomb was causational or correlational. Either way, it was demonstrably pleasurable.

“Apothecari Biosciences products are straightforward CBD in every administration option users could desire.”

After the ice-breaker of bath bombs, I began utilizing the CBD balm, also known as the “O’Shaughnessy,” ostensibly the moniker of one of its makers—a slight lack of detailed information points in their limited promotional literature led me to this and several other assumptions about their developing product line. Having long-standing chronic pain in my left shoulder as a result of a blacked-out, underage drunken driver smashing into me in 2007, I employed the balm for 10 days, entrusting its capacities to provide small relief of the fairly constant ache the injury involves most days. Over the course of use, I might attest that some pain signaling was blunted by the product … no pun intended.

Throughout the nearly two-week testing timescale, I used the dried CBD “Amaorican Capsules” (now not listed at all on their website) orally on only three days. Unfortunately, having popped one of these “pills” on an empty stomach one morning with a pile of the necessary meds and supplements I intake twice daily for a complex and rare autoimmune disease may have been ill-advised. Perhaps interacting with said meds and a heaping dose of Friday morning end-of-the-work-week stress, I was pitched into a moderate allergic reaction, with the only unusual variable being the capsule. The behemoth caveat included in this particular report is a chronic allergic disorder, wherein my body’s fickle mast cells can elect to set me aflame with rapid and vexatious reactions of severe rashes, flushing and a slew of allied symptoms on a whim. Emergency meds employed, I returned to homeostasis within an hour, and it cannot be stated that the ABS CBD capsule was the cause of the matter, as my irascible system can be flustered by any number of normally benign or minor alterations of state or circumstance. Hell, my cat licks my arm and I get fiery welts in the charming shape of a feline tongue within 10 minutes. So do the math, and maybe give the capsules a pass, especially for constitutions less ridiculous than mine.

“Over the course of use, I might attest that some pain signaling was blunted by the product… no pun intended.”

Last in the array of ABS products for my purposes was the high-potency, full-spectrum tincture. I used the dropper-based elixir infused in my turmeric detox tea, which lent a lovely minty essence to the steaming cup. I can say that there appeared a more noted soothing effect of the tincture—sensibly so, as historically, my system tends to respond well to orally indicated oils of this nature. In the test phase thus far, the tincture is the frontrunner favorite, with the bath bomb as a close second.

ABS seems a clean-cut, honest and innovative purveyor in the high-demand CBD market, and perhaps my favorite part of their pitch is the simplicity and versatility of their line. There’s no needless gimmicks, nothing overly trendy or vacuous, and no excessive sheen or styling to their brand. Apothecari Biosciences products are straightforward CBD in every administration option users could desire. Their accessible and apparently effective products can be found onsite and at apothecaribio.com.