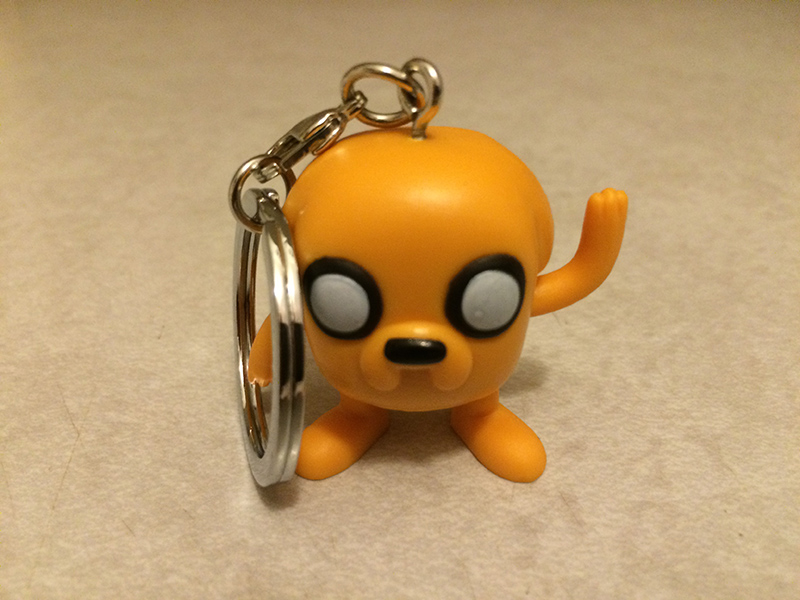 The awesome minds at Geek Fuel shipped us their latest box for the month of August, and we got some awesome goodies inside. Let’s open it up and see what we got.

Now you can take some of the adventure with you with these awesome keychains from Funko! You had the chance of getting Jake or Finn, but we got the former in this set. Much like other Funko items, they’re not really movable in any form, but that’s not really what you’re looking for in a keychain. Its adorable and one of the best ways to show off you’re a fan—just beware of poachers. When I was growing up, the Ninja Turtles were on EVERYTHING—including cereal, which I’m sure contributed greatly to my skills of beating their arcade game while dressed as Donatello for Halloween—but I digress. To my knowledge, they didn’t make suckers, so this was a pleasant treat. The sour apple taste is alright, but the weird part of the sucker was that parts of it started turning white after a few minutes, so the food coloring isn’t all that great. If you’ve ever played Fallout of any generation, you know how important it is to keep bottle caps on you at all times. Included in this pack is the highest currency you can have in a world of constant despair, a Nuka Cola bottle cap, which is a mighty powerful magnet. As a bonus, the card it’s attached to makes a great bookmark.

The World According To Spider-Man Insight Edition have started releasing these series of books from Marvel characters that are kinda cool but kinda weird. You had a chance of getting either the Wolverine or the Spider-Man version, but we received the latter. The book goes into detail about the character and all of his abilities and intricacies, complete with attachment items and pop-up pieces. But ultimately it feels like a book catered to a younger audience than myself. The video game this month is a Steam copy of Aaru’s Awakening, a platformer where you go through an epic journey in harsh landscapes as an adventurous mythical creature that looks like a sloth that breathes fire. It’s an awesome game with a lot of challenges that remind me of Shovel Knight at times—well worth the download for fans of the genre. The strange addition to this game was a set of snapper fireworks, which doesn’t make much sense to me, but hey, fun thing for the kids to mess with. Yep, it’s a Deadpool shirt. I think we’re nearing the end of people’s obsession with Deadpool, especially since everyone dresses like him at every con you’ve ever attended since 2009. We’re bordering on the point where there’s too much saturation of him just before the movie. That being said, this is actually a cool shirt done in a creative way with blood spatter—a nice addition to my collection of black comic book shirts. When we first started reviewing these boxes, we were under the assumption that you received bonus items in every box. We were corrected by the company who said on the first box you get three items for the most amount. Sadly, we only received two. They corrected that in this box by sending us this nostalgic symbol to key finding. Basically it uses watch batteries and a whistle system, all you need to do is set a whistle pitch and turn it on, and when you need to find your keys, whistle loudly and it will make noise. Super rad!

This was a damn fine box. Even taking the Bonus item away, this was a pretty cool set of items, well worth the purchase price. I’m excited to see what the September Geek Fuel box will be like, because now we’re seeing them get a little extra creative with topical stuff, and not just adding random items that may or may not fit together.