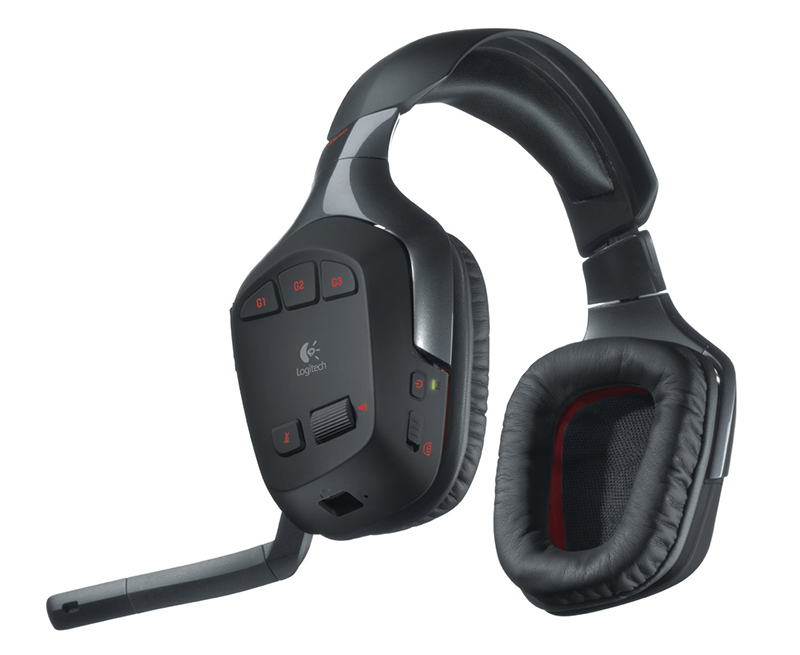 Let’s face it, people—communication is an even bigger part of gaming now than it ever has been in the past. If you’ve ever lost a round of Team Fortress 2 because of that one person on your team whose mic sounded like it was rattling around in a metallic lunchbox full of screws, then you know how much it can really matter. Even if you’re someone playing games more casually, there’s something way more appealing about being able to hear and talk with your guildmates on World of Warcraft than having to type into chat while you’re raiding.

That said, a good headset can go a long way for the committed gamer, and it beats playing with a crappy set of speakers any day. So, before you invest in a $700 sound system that can handle your surround-sound, high-audio-fidelity gaming needs, it’s time to check out the Logitech G930 Headset.

The unit has a reassuring weight to it, with metal in the inner band that will prevent any accidental snapping. The plastic on the speakers has a nice matte finish, and they’re amazingly articulate. I have a pretty big head, so I’m used to feeling kind of squished by any set of headphones, but it was easy to find a setting that was comfortable even for me. The charging cable is more like a disc with a USB port for the wireless dongle right smack dab in the middle of it. That way, you can charge your headphones while you play, without having to take up two USB ports. As small a detail as that may sound like, on some devices it can really make a huge difference. Big points to Logitech for thinking around that problem!

The speakers were big and rectangular, forming a box around my ears without pressing down hard on my earlobes. When I finally had them on my head, there was an immediate difference in the ambient sound. Even the loud belching of my air conditioning unit was no more than a faint purr in the distance. I became acutely aware of the sound of my own heartbeat, which, while mildly disconcerting, stood as a pretty strong testament to the Logitech G930’s ability to cancel out ambient noise. The fit was comfortable, but firm enough that it didn’t feel like it was going to fall off my head. Hell, this thing even stood up to some moderate headbanging, which makes me think that there might be an actual metalhead on Logitech’s staff somewhere who got their hands on this project—if you’re reading this, I hope you know that you’re awesome.

Then I slid down the microphone and got to work. My computer seemed to have no trouble with the connection, downloading the drivers easily and getting the headset running in a little under a minute. From there, I ran it through the gauntlet of my music collection. The balance on the speakers is nice, without the big, annoying bass drivers that you’d find in a bargain-bin pair of headphones. You could probably buy this headset for music alone if you’re looking for a durable, high-grade pair of headphones for dedicated listening at a reasonable $160 price tag. There are even three programmable buttons on the left ear that default to the three most common music-listening commands—Pause/Play, Playlist Next and Playlist Previous—along with an audio scroller that has a pretty high degree of precision, moving at about 2-percent intervals when you need just a little more or less sound.

After listening to a healthy mix of electronic, heavy metal, folk, pop and hip-hop, I decided that these are my new music-reviewing headphones. I won’t be able to take them on the go, but that just means they can stay home, nice and safe from the outside world. Their sound is incredibly clear, and I was even able to go upstairs and fix myself a sandwich without any audio problems. However, you’ll know pretty quick when you get out of range, as there will be a few minor audio errors. That said though, the range is pretty stunning. I’d say you have a good 20–25 feet worth of distance before you notice anything.

Then it was time to give the game audio and the mic a good test. I recorded a few samples of myself just to test it out, and I was blown away by the clarity of the mic. I’m used to sounding like I’m on the phone when I’m chatting with my friends, but the Logitech G930 sounds like a mid-grade podcast recording. Even my online friends remarked at how good the audio sounded.

As for how it handled sound effects in-game, I rarely experienced the blown-out audio from other headphones, and even then, I was still picking up the tiniest audio effects that often get masked by low-range sound systems. Being able to adjust the volume on the fly between dialogue and gameplay added to the experience, never forcing me to turn from the screen and adjust a knob. On top of all that, I could easily control my favorite gaming playlist while in-game without ever groping for the right key or peering down at an illuminated strip. You never really notice how much attention that can take away from the game until you no longer have to deal with it.

Out of curiosity, I even tested the Logitech G930 out on my PS4. Fully expecting such an experiment to fail, a stupid grin spread across my face as I began to hear the audio faithfully reproduced on my headset. The sound was kind of quiet, even at the loudest setting internally on my PS4, but this was offset by the effective noise isolation these headphones produce. I still got a shock when my fiancée came and sat down next to me while I was playing Bloodborne alone in the dark.

All told, the Logitech G930 is an extraordinary piece of hardware, handling game audio, chat and music with equal ease. It’s got the sort of high-fidelity audio and durability I’d expect at triple the price, and hell, it even looks awesome. $160 is practically highway robbery for audio this good, so if you’re serious about getting your head in the game, forget the Oculus Rift—the Logitech G930 is where you want to be.