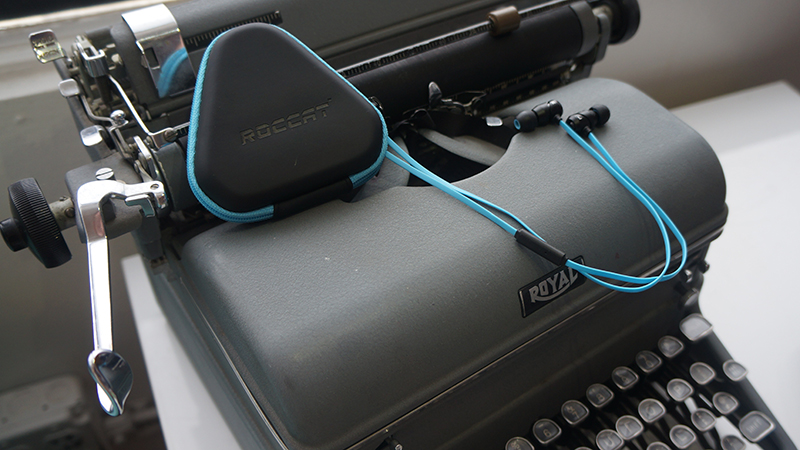 Over the years, I’ve had way more frustrating experiences with in-ear headphones than positive ones. After all, I only look for three qualities in any pair I buy—sound, comfort and durability—but it seems that most headphones can only manage two at a time. Roccat’s Aluma series, however, far exceeded my expectations, and though this headset has its fair share of quirks, they’re well worth a buy for those looking for a workhorse set.

Before I get into the nitty gritty, it’s worth mentioning that these earbuds look pretty damn cool. With a sleek, cyan-on-black aesthetic and a zip-up triangular carrying case, the Aluma gets serious points for presentation. Beyond that, the carrying case is just small enough to fit in a pocket along with a wallet, and its unique shape makes it easy to pat yourself down and find it when you’re getting ready to roll in the morning. Having a dedicated, long-term carrying case gives this headset a lot of longevity, and I’m used to getting little more than a glorified coin pouch with my purchase. However, good style alone doesn’t make for quality earbuds. Luckily, the Aluma boasts a clear, even sound, free of the overdriven bass and tinny mids that make most earbuds nigh-unlistenable. Nevertheless, when the bass turns up, these peppy little buds handle it extremely well, responding with satisfying and full bass sound. It’s rare to get such tonal range on a pair of headphones you’re not spending an arm and a leg on, and while you’re still better served by a good pair of studio earmuffs, getting to take this kind of sound quality on the go feels pretty awesome.

Shoving rubber spacers into one’s ears isn’t comfortable in the best of times, but I’ll settle for a set that isn’t constantly falling out. The problem I’ve run into time and again is that, while the rubber inserts come in three sizes, they never seem to fit quite right. Every pair I’ve owned up until now has either required me to constantly shove them back into my ears or deal with intense, uncomfortable pressure. The Aluma’s size selection may not be any greater than the competition, but somehow their small size seems to fit just right. Obviously, mileage may vary, but I found that the headset actually stayed in pretty well, and I rarely had any issues while sitting still. Thankfully, I found that the same stability and comfort remained while I was up and moving around, and even jogging didn’t seem to loose them. I’m a public-transit kind of guy, so it’s nice to make the long walks between bus stops without losing audio.

It’s only been a couple of months, but I get the sense that this headset will be able to withstand some serious punishment. The aluminum casing on the earpieces adds a sense of weight and durability to the whole package, and the flat, tangle-free wire frees me from a great deal of mundane maintenance. All that combined with the carrying case makes this headset feel like it’s going to last. I really hate the idea of dropping a wad of cash on new headphones when I know I’m just going to have to replace them later, so having a little sense of security in my investment makes a difference.

Now, for a little of the bad. The Aluma mic works pretty well, and the audio it picks up is clear and loud, but the button that controls playback is spotty at best. Oftentimes, clicking the button to pause or play would simply start up Siri instead. Sure, it stopped my music all right, but this little flub in functionality can be really weird and inconvenient, especially when it starts picking up voice commands from whoever I’m pausing my music to talk to. Luckily, it’s not really a critical feature, and I’m plenty happy to just pop out an earbud out if I need to.

All that said, the Aluma beats out most of the competition, and I’ve found plenty of uses for this headset. From everyday music listening to streaming and team chat on my PS4, the Aluma is a workhorse that gets the job done in style and at a good price point. I’ll gladly pay the $50 Roccat charges in their online store, but if you can pick this number up on the cheap, it will serve you well.